Selection of a suitable and economical floor system for a steel-frame building involves many considerations: load-carrying capacity, durability, fire resistance, dead weight, overall depth, facility for installing power, light, and telephones, facility for installing aid conditioning, sound transmission, appearance, maintenance, and construction time.
Building codes specify minimum design live loads for floor and roof systems.
In the absence of a code regulation, one may use ‘‘Minimum Design Loads in Buildings and Other Structures,’’ ASCE 7-93, American Society of Civil Engineers.
See also Art. 5.1.2. Floors should be designed to support the actual loading or these minimum loads, whichever is larger. Most floors can be designed to carry any given load. However, in some instances, a building code may place a maximum load limit on particular floor systems without regard to calculated capacity.

Resistance to lateral forces should not be disregarded, especially in areas of seismic disturbances or for perimeter windbents. In designs for such conditions, floors may be employed as horizontal diaphragms to distribute lateral forces to walls or vertical framing; those elements then transmit the lateral forces to the foundations. When using lightweight floor systems, special reinforcement in the floor slab may be necessary at those points where the floor diaphragm transfers the horizontal forces to the frame elements.
Durability becomes a major consideration when a floor is subject to loads other than static or moderately kinetic types of forces. For example, a light joist system may be just the floor for an apartment or an office building but may be questionable for a manufacturing establishment where a floor must resist heavy impact and severe vibrations. Shallow floor systems deflect more than deep floors; the system selected should not permit excessive or objectionable deflections.
Fire resistance and fire rating are very important factors, because building codes in the interest of public safety, specify the degree of resistance that must be provided.
Many floor systems are rated by the codes or by fire underwriters for purposes of satisfying code requirements or basing insurance rates.
The dead weight of the floor system, including the framing, is an important factor affecting economy of construction. For one thing, substantial saving in the weight and cost of a steel frame may result with lightweight floor systems. In addition, low dead weight may also reduce foundation costs.
Joist systems, either steel or concrete, require no immediate support, since they are obtainable in lengths to meet normal bay dimensions in tier building construction.
On the other hand, concrete arch and cellular-steel floors are usually designed with one or two intermediate beams within the panel. The elimination of secondary beams does not necessarily mean overall economy just because the structural-steel contract is less. These beams are simple to fabricate and erect and allow much duplication. An analysis of contract price shows that the cost per ton of secondary beams will average 20% under the cost per ton for the whole steel structure; or viewed another way, the omission of secondary beams increases the price per ton on the balance of the steelwork by 31⁄2% on the average. This fact should be taken into account when making a cost analysis of several systems.
Sometimes, the depth of a floor system is important. For example, the height of a building may be limited for a particular type of fire-resistant construction or by zoning laws. The thickness of the floor system may well be the determining factor limiting the number of stories that can be built. Also, the economy of a deep floor is partly offset by the increase in height of walls, columns, pipes, etc.
Another important consideration, particularly for office buildings and similartype occupancies, is the need for furnishing an economical and flexible electrical wiring system. With the accent on movable partitions and ever-changing office arrangements, the readiness and ease with which telephones, desk lights, computers, and other electric-powered business machines can be relocated are of major importance.
Therefore, the floor system that by its makeup provides large void spaces or cells for concealing wiring possesses a distinct advantage over competitive types of solid construction. Likewise, accommodation of recessed lighting in ceilings may disclose an advantage for one system over another. Furthermore, for economical air  conditioning and ventilation, location of ducts and method of support warrant study of several floor systems.
Sound transmission and acoustical treatments are other factors that need to be evaluated. A wealth of data are available in reports of the National Institute of Standards and Technology. In general, floor systems of sandwich type with air spaces between layers afford better resistance to sound transmission than solid systems, which do not interrupt sound waves. Although the ideal soundproof floor is impractical, because of cost, several reasonably satisfactory systems are available.

Much depends on type of occupancy, floor coverings, and ceiling finish—acoustical plaster or tile.
Appearance and maintenance also should be weighed by the designer and the owner. A smooth, neat ceiling is usually a prerequisite for residential occupancy;
a less expensive finish may be deemed satisfactory for an institutional building.
Speed of construction is essential. Contractors prefer systems that enable the follow-up trades to work immediately behind the erector and with unimpeded efficiency.
In general, either rolled beams or open-web joists are used to support the floor elements. The most common types of flooring are (a) concrete fill on metal deck, (b) pre-cast concrete plank, and (c) cast-in-place concrete floors with integral joist.
Metal decks may be cellular or plain and are usually stud-welded to the supporting elements to provide composite action. Cast-in-place concrete floors, or concretepan floors, are becoming less common than in the past. In addition to the systems described, there are several adaptations of these as well as other proprietary systems.

The lightest floor system in common use is the open-web steel joist construction shown in Fig. 7.23. It is popular for all types of light occupancies, principally because of initial low cost.
Many types of open-web joists are available. Some employ bars in their makeup, while others are entirely of rolled shapes; they all conform to standards and goodpractice specifications promulgated by the Steel Joist Institute and the American Institute of Steel Construction (see Table 7.1). All joists conform to the standard loading tables and carry the same size designation so that designers need only indicate on project drawings the standard marking without reference to manufacturer, just as for a steel beam or column section.
Satisfactory joists construction is assured by adhering to SJI and AISC recommendations.
Joists generally are spaced 2 ft c to c. They should be adequately braced (with bridging) during construction to prevent rotation or buckling, and to avoid ‘‘springy’’ floors, they should be carefully selected to provide sufficient depth.
This system has many advantages: Falsework is eliminated. Joists are easily handled, erected, and connected to supporting beams—usually by tack welding.

Temporary coverage and working platforms are quickly placed. The open space between joists, and through the webs, may be utilized for ducts, cables, light fixtures, and piping. A thin floor slab may be cast on steel lath, corrugated-steel sheets, or wire-reinforced paper lath laid on top of the joists. A plaster ceiling may be suspended or attached directly to the bottom flange of the joists.
Lightweight beams, or so-called ‘‘junior’’ beams, are also used in the same manner as open-web joists, and with the same advantages and economy, except that the solid webs do not allow as much freedom in installation of utilities. Beams may be spaced according to their safe load capacity; 3- and 4-ft spacings are common.
As a type, therefore, the lightweight-steel-beam floor is intermediate between concrete arches and open-web joists.

Cold-formed steel decking is frequently used in office buildings. One type is illustrated in Fig. 7.24. Other manufacturers make similar cellular metal decks, the primary difference being in the shape of the cells. Often, decking with half cells is used. These are open ended on the bottom, but flat sheets close those cells that incorporate services. Sometimes, cells are enlarged laterally to transmit air for air conditioning.
Two outstanding advantages of cellular floors are rapidity of erection and ease with which present and future connections can be made to telephone, computer, light, and power wiring, each cell serving as a conduit. Each deck unit becomes a working platform immediately on erection, thus enabling the several finishing trades to follow right behind the steel erector.
Although the cost of the steel deck system may be larger than that of other floor systems, the cost differential can be narrowed to competitive position when equal consideration for electrical facility is imposed on the other systems; e.g., the addition of 4 in of concrete fill to cover embedded electrical conduit on top of a concrete flat-slab floor.
In earlier floors of this type, the steel decking was assumed to be structurally independent. In that case, the concrete fill served only to provide fire resistance and a level floor. Most modern deckings, however, are bonded or locked to the concrete, so that the two materials act as a unit in composite construction. Usually, only top-quality stone concrete (ASTM C33 aggregates) is used, although lightweight concrete made with ASTM C330 aggregates is an acceptable alternative. 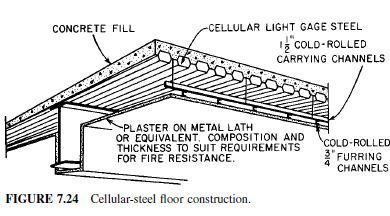 Usage of cellular deck in composite construction is facilitated by economical attachment of shear connectors to both the decking and underlying beams. For example, when welded studs are used, a welding gun automatically fastens the studs through two layers of hot-dipped galvanized decking to the unpainted top flanges of the steel beams. This construction is similar to composite concrete-steel beams (Art. 7.13.3)
The total floor weight of cellular steel construction is low, comparable to openweb steel joists. Weight savings of about 50% are obtained in comparison with allconcrete floors; 30% savings in overall weight of the building. However, a big cost saving in a high-labor-rate area results from elimination of costly formwork needed for concrete slabs, since the steel decking serves as the form.
Fire resistance for any required rating is contributed by the fill on top of the cells and by the ceiling below (Fig. 7.24). Generally, removable panels for which no fire rating is claimed are preferred for suspended ceilings. In this case, fireproofing materials are applied directly to the underside of the metal deck and all exposed surfaces of steel floor beams, a technique often called spray-on fireproofing.

In composite construction, the structural concrete slab is made to assist the steel beams in supporting loads. Hence, the concrete must be bonded to the steel to ensure shear transfer. When the steel beams are completely encased in the concrete, the natural bond is considered capable of resisting horizontal shear. But that bond generally is disregarded when only the top flange is in contact with the concrete.
Consequently, shear connectors are used to resist the horizontal shear. Commonly used connectors are welded studs, hooked or headed, and short lengths of channels.
Usually, composite construction is most efficient for heavy loading, long spans, large beam spacing, and restricted depths. Because the concrete serves much like a cover plate, lighter steel beams may be used for given loads, and deflections are smaller than for noncomposite construction. 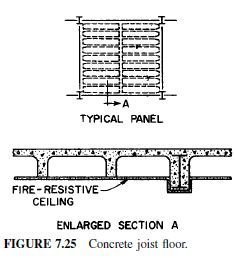 Concrete floors cast on removable metal forms or pans, which form the joists, are frequently used with steel girders. Since the joists span the distance between columns, intermediate steel beams are not needed (Fig. 7.25). This floor generally weighs less than the arch system (reinforced concrete slabs on widely spaced beams), but still considerably more than the lightest types.
There are a number of variations of the concrete-joist system, such as the ‘‘gird’’ or ‘‘waffle’’ system, where the floor is cast on small, square, removable pans, or domes, so that the finished product becomes a two-way joist system.
Other systems employ permanent  filler blocks—usually a lightweight tile. Some of these variations fall in the heaviest floor classification; also the majority require substantial forms and shoring. 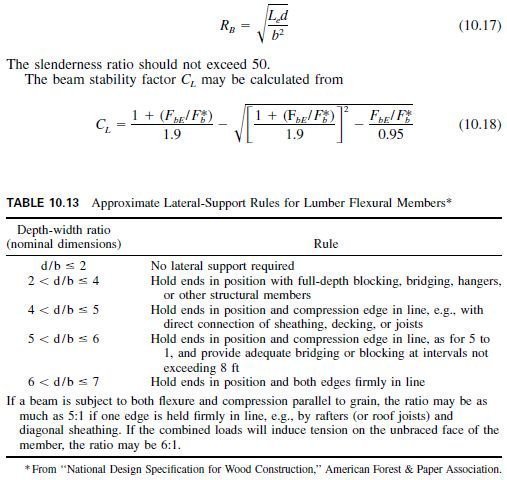