Some buildings require recessed light fixtures and air-conditioning ducts, thus interrupting the continuity of fire-resistive ceilings. A rule that evolved from early standard fire tests permitted 100 in2 of openings for noncombustible pipes, ducts, and electrical fixtures in each 100 ft2 of ceiling area.
It has since been demonstrated, with over 100 fire tests that included electrical fixtures and ducts, that the fire-resistance integrity of ceilings is not impaired when, in general:
Recessed light fixtures, 2 by 4 ft, set in protective boxes, occupy no more than 25% of the gross ceiling area.
Air-duct openings, 30 in maximum in any direction, are spaced so as not to occupy more than 576 in2 of each 100 ft2 of gross ceiling area. They must be protected with fusible-link dampers against spread of smoke and heat.
These conclusions are not always applicable. Reports of fire tests of specific floor systems should be consulted.

A serious infringement of the fire rating of a floor system could occur when pipes, conduit, or other items pierce the floor slab, a practice called ‘‘poke-through.’’ Failure to calk the openings with insulating material results in a lowering of fire ratings from hours to a few minutes. 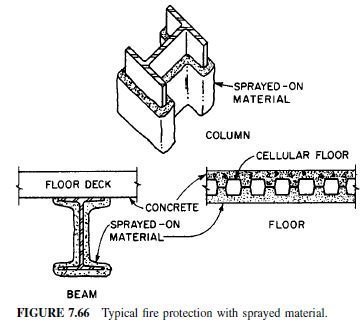