The principles of construction project management, as outlined in this article, apply equally to those engaged in subcontracting and those engaged in general contracting.
Small Renovation Contractors. These companies generally work on jobs requiring small amounts of capital and the type of work that does not require much estimating or a large construction organization. They usually perform home alterations or small commercial and office work. Many small renovation contractors have their offices in their homes and perform the ‘‘paper work’’ at night or on weekends after working with the tools of their trade during the day. The ability to grow from this type of contractor to a general contractor depends mainly on the training and business ability of the individual. Generally, if one is intelligent enough to be a good small renovation contractor, that person may be expected to eventually move into the field of larger work.

General Contractors. These companies often are experts in either new buildings or alteration work. Many building contractors subcontract a major portion of their work, while alteration contractors generally perform many of the trades with their own forces. Some general contractors specialize in public works. Others deal mainly with private and commercial work. Although a crossing of the lines by many general contractors is common, it is often in one or another of these fields that many general contractors find their niche.
Owner-Builder. The company that acts as an owner-builder is not a contractor in the strict sense of the word. Such a company builds buildings only for its own ownership, either to sell on completion, or to rent and operate. Examples of this type of company include giants in the industry, and many of them are listed on the various stock exchanges. Many owner-builders, on occasion, act in the capacity of general contractor or as construction manager (see below) as a sideline to their main business of building for their own account.
Real Estate Developer. This is a type of owner-builder who, in addition to building for personal ownership, may also build to sell before or after completion of the project. One- and two-family home builders are included in this category.
Professional Construction Manager. A professional construction manager may be defined as a company, an individual, or a group of individuals who perform the functions required in building a project as the agent of an owner, but do so as if the job was being performed with the owner’s own employees. The construction management organization usually supplies all the personnel required. Such personnel include construction superintendents, expediters, project managers, and accounting personnel.
The manager sublets the various portions of the construction work in the name of the owner and does all the necessary office administration, field supervision, requisitioning, paying of subcontractors, payroll reports, and other work on the owner’s behalf, for a fee. Generally, construction management is performed without any risk of capital to the construction manager. All the financial obligations are contracted in the name of the owner by the construction manager. (See Art. 17.9.)
Program Manager. A general contractor or construction manager may expand services by undertaking program management. Such services will include: demolition of existing buildings on the site; devising and providing financial analyses of new buildings or a program to replace what was there, or for the acquisition of a new site; hiring an architect and other design professionals on behalf of the owner and supervising their services; performing preconstruction services during the planning stage; advertising for and receiving bids from contractors for the new work;
consulting on financing and methods of payment for the work; supervising the contractor; obtaining tenants, whether commercial, residential, or industrial for the completed project; helping to administer and manage the complete project.
Obviously, the comprehensive services outlined above will require that the general contractor or construction manager augment his staff with trained architects, accountants, real estate professionals, and management and leasing experts.

Package (Turnkey) Builders. Such companies take on a contract for both design and construction of a building. Often these services, in addition, include acquisition of land and financing of the project. Firms that engage in package building usually are able to show prospective clients prototypes of similar buildings completed by them for previous owners. From an inspection of the prototype and discussion of possible variations or features to be included, an approximate idea is gained by the prospective owner of the cost and function of the proposed building.
Package builders often employ their own staff of architects and engineers, as well as construction personnel. Some package builders subcontract the design portion to independent architects or engineers. It is important to note that, when a package builder undertakes design as part of the order for a design-construction contract, the builder must possess the necessary professional license for engineering or architecture, which is required in most states for those performing that function.
Sponsor-Builder. In the field of government-aided or subsidized building, particularly in the field of housing, a sponsor-builder may be given the responsibility for planning design, construction, rental, management, and maintenance. A sponsor guides a project through the government processing and design stages. The sponsor employs attorneys to deal with the various government agencies, financial institutions, and real estate consultants, to provide the know-how in land acquisition and appraisal. On signing the contract for construction of the building, the sponsor assumes the builder’s role, and in this sense functions very much as an ownerbuilder would in building for its own account. 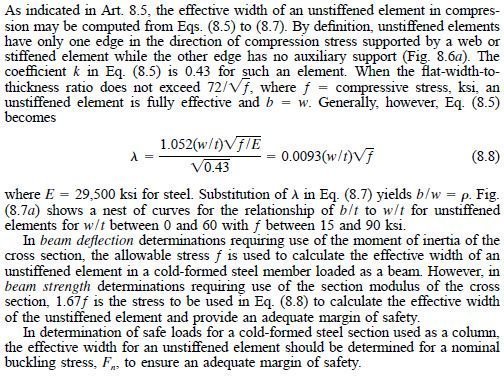 Design Values for Lumber and Timber