In determining stresses in masonry, effects of loads should be computed on actual dimensions, not nominal. Except for engineered masonry, the stresses should not exceed the allowable stresses given in ANSI Standard Building Code Requirements for Masonry (A41.1), which are summarized for convenience in Table 11.4.
This standard recommends also that, in composite walls or other structural members composed of different kinds or grades of units or mortars the maximum stress should not exceed the allowable stress for the weakest of the combination of units and mortars of which the member is composed.

Allowable stresses—compressive ƒn tensile ƒt and shearing ƒv—for brick construction should not exceed the values shown in Tables 11.5 and 11.6. For allowable loads on walls and columns, see Art. 11.10.2.
For wind, blast, or earthquake loads combined with dead and live loads, the allowable stresses in brick construction may be increased by one-third, if the resultant section will not be less than that required for dead loads plus reduced live loads alone. Where the actual stresses exceed the allowable, the designer should specify a larger section or reinforced brick masonry. 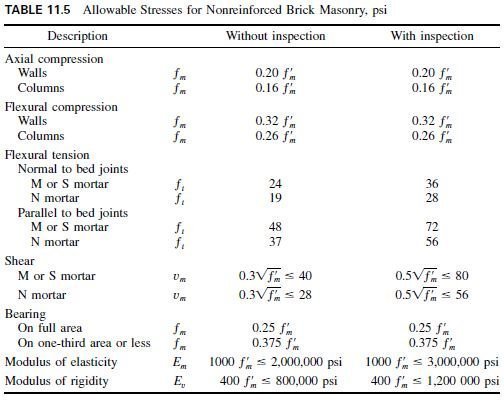 Eccentricity-Thickness Ratio. The ratio of maximum virtual eccentricity to wall thickness e/ t is used in selecting the eccentricity coefficient Ce. Design of a nonreinforced member requires that e/ t be less than or equal to 1⁄3. If e/ t is greater than 1⁄3, the designer should specify a larger section, different bearing details for load transfer to the masonry, or reinforced brick construction.
Slenderness Ratio. This is the ratio of the unsupported height h to the wall thickness t. It is used in selecting the slenderness coefficient Cs.
The unsupported height h is the actual distance between lateral supports. Not always the floor-to-floor height, h may be taken as the distance from the top of the lower floor to the bearing of the upper floor where these floors provide lateral support.
The effective thickness t for nonreinforced solid masonry is the actual wall thickness, except for metal-tied cavity walls. In cavity walls, each wythe is consid ered to act independently, thus producing two different walls. When the cavity is filled with grout, the effective thickness becomes the total wall thickness.

Eccentricity Coefficients. Ce may be selected from Table 11.7, or calculated from Eqs. (11.3) to (11.5). Linear interpolation is permitted within the table. 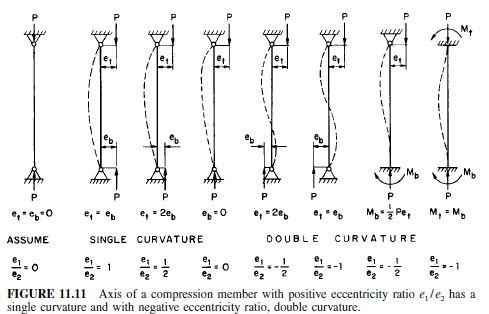 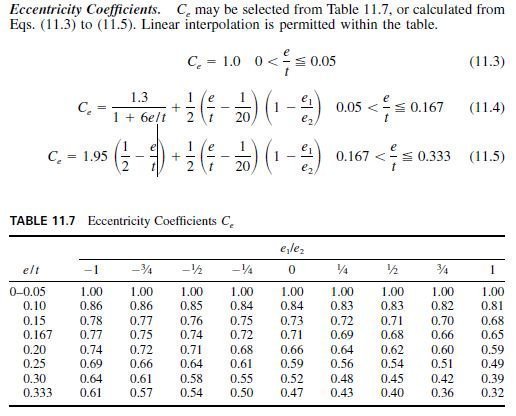 ‘‘Building Code Requirements for Engineered Brick Masonry’’ also provides a basis for design of eccentrically loaded shear walls. The standard requires that, in a nonreinforced shear wall, the virtual eccentricity eL about the principal axis normal to the length L of the wall not exceed an amount that will produce tension. In a nonreinforced shear wall subject to bending about both principal axes, etL  eLt should not exceed tL/3, where et  virtual eccentricity about the principal axis normal to the thickness t of the shear wall. Where the virtual eccentricity exceeds the preceding limits, shear walls should be designed as reinforced or partly reinforced walls.
Consequently, for a planar wall the virtual eccentricity eL, which is found by dividing the overturning moment about an axis normal to the plane of the wall by the axial load, should not exceed L/6. In theory, any virtual eccentricity exceeding L/6 for planar shear wall will result in development of tensile stresses. If, however, intersecting walls form resisting flanges, the classic approach may be used where the bending stress Mc/ I is combined with the axial stress P/A. If the bending stress exceeds the axial stress, then tensile stresses are present. (Note that some building codes require a safety factor against overturning. It is usually 1.5 for nonreinforced walls. But the codes state that, if the walls are vertically reinforced to resist tension, the safety factor does not apply.) 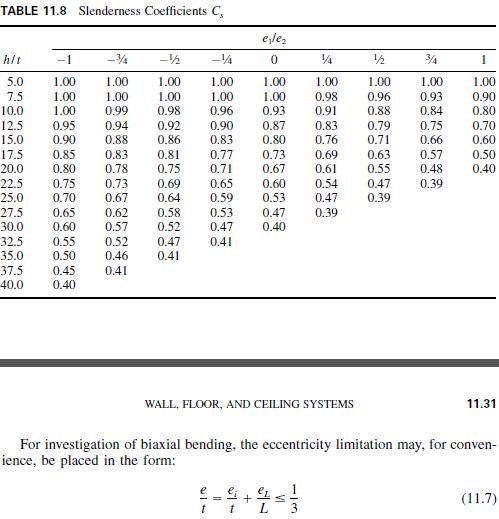 Allowable vertical loads on shear walls may be computed from Eq. (11.2). The effective height h for computing Cs should be taken as the minimum vertical or horizontal distance between lateral supports.
Allowable shearing stresses for shear walls should be taken as the sum of the allowable shear stress given in Table 11.5 or 11.6 and one-fifth the average compressive stress produced by dead load at the level being analyzed, but not more than the maximum values listed in these tables.
In computation of shear resistance of a shear wall with intersecting walls treated as flanges, only the parts serving as webs should be considered effective in resisting the shear.
When non-load-bearing shear walls are required to resist overturning moment only by their own weight, the design can become critical. Consequently, positive ties should be provided between shear walls and bearing walls, to take advantage of the bearing-wall loads in resisting overturning. The shear stress at the connection of the shear wall to the bearing wall should be checked. The designer should exercise judgment in assumption of the distribution of the axial loads into the nonload- bearing shear walls.

Walls whose function is to carry only vertical loads should be proportioned primarily for compressive stress. Allowable vertical loads are given by Eq. (11.2).
Effects of all loads and conditions of loading should be investigated. For application of Eq. (11.2), each loading should be converted to a vertical load and a virtual eccentricity.
In the lower stories of a building, the compressive stress is usually sufficient to suppress development of tensile stress. But in the upper stories of tall buildings, where the exterior walls are subject to high lateral wind loads and small axial loads, the allowable tensile stress may be exceeded occasionally and make reinforcement necessary.
When lateral forces act parallel to the plane of bearing walls that act as loadbearing shear walls, the walls must meet the requirements for both shear walls and biaxial bending (Art. 11.10.3). Such walls must be checked, to preclude development of tensile stress or excessive compressive or shearing stresses. If analysis indicates that tension requirements are not satisfied, the size, shape, or number of shear walls must be revised or the wall must be designed as reinforced masonry.