Any change in flow of current, such as that which occurs in alternating current, produces a magnetic field around the wire. With steady flow, as in direct current, there is no magnetic field.
One common application of magnetic fields is for solenoids. These are coils of wire, with many turns, around a hollow cylinder in which an iron pin moves in the direction of the magnetic field generated by the current in the coil. The movement of the pin is used to open or close electric switches, which start and stop motors, or open and close valves. The pin returns to a normal position, either by gravity or spring action, when the current in the coil is stopped.
The motion of the pin can be predicted by the right-hand rule. If the fingers of the right hand are curled around the solenoid with the fingers pointing in the same direction as the current in the coil, the thumb will point in the direction of the magnetic field, or the direction in which the pin will move.
With direct current, a magnetic field exists only as the flow changes from zero to steady flow. Once steady flow is established in the wire, the magnetic field collapses. For this reason, all devices and machines that rely on the interaction of current and magnetic fields must use alternating current, which changes continuously.
This equipment includes transformers, motors, and generators.
Transformers. These are devices used to change voltages. A transformer comprises two separate coils, primary and secondary, that wind concentrically around a common core of iron (Fig. 15.2). A common magnetic field consequently cuts both the primary and secondary windings. When alternating current (ac) flows in the primary coil, the changing magnetic field induces current in the secondary coil. The voltage resulting in each winding is proportional to the number of turns of wire in each coil. For example, a transformer with twice the number of turns in the secondary coil as in the primary will have a voltage across the secondary coil equal to twice the primary voltage.

AC Generators and Motors. Just as changes in current flowing in a wire produce a magnetic field, movement of a wire through a magnetic field produces current in the wire. This is the principle on which electric motors and generators are built.
In these machines, a rotating shaft carries wire coils wound around an iron core, called an armature. A stationary frame, called the stator, encircling the armature, also carries iron cores around which are wound coils of wire. These cores are arranged in pairs opposite each other around the stator, to serve as poles of magnets.
The windings are so arranged that if a north pole is produced in one core a south pole is produced in the opposite core. Current flowing in the stator, or field, coils create a magnetic field across the rotating armature.
There are two basic types of motors and generators, synchronous and induction.
In a synchronous machine, the armature has a separate magnetic field produced by a direct current exciter that interacts with the magnetic field of the stator. In an induction machine, the magnetic field in the armature is induced by movement past the stator field.

Structural Requirements for Openings and Doors 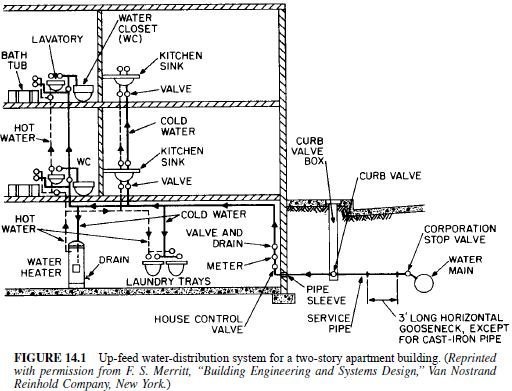