The capacity of members subject to bending depends on the cross-section geometry, AISC ASD and LRFD procedures incorporate the concept of compact and noncompact sections.

Beams classified as compact are allowed a bending stress, ksi, Fb = 0.66Fy for the extreme surfaces in both tension and compression, where Fy, is the specified yield stress, ksi. Such members have an axis of symmetry in the plane of loading, their compression flange is adequately braced to prevent lateral displacement, and they develop their full plastic moment (section modulus times yield stress) before buckling. 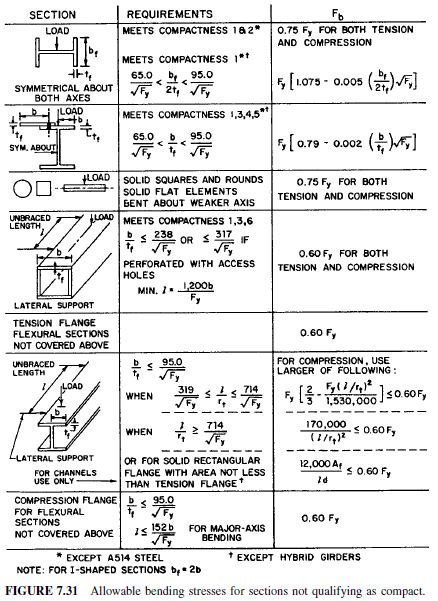 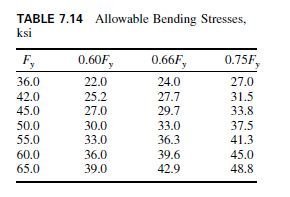 Lateral Support of Beams. In computation of allowable bending stresses in compression for beams with distance between lateral supports exceeding requirements,  a range sometimes called laterally unsupported, the AISC ASD formulas contain a moment factor Cb in recognition of the beneficial effect of internal moments, both in magnitude and direction, at the points of support. For the purpose of this summary, however, the moment factor has been taken as unity and the formulas simplified in Fig. 7.31. The formulas are exact for the case in which the bending moment at any point within an unbraced length is larger than that at both ends of this length. They are conservative for all other cases. Where more refined values are desired, see Art. 7.20.2 or refer to the AISC ASD specification for structural steel buildings.
Limits on Beam Width-Thickness Ratios. For flexural members in which the width-thickness ratios of compression elements exceed the limits given in Fig. 7.31 and which are usually lightly stressed, appropriate allowable bending stresses are suggested in ‘‘Slender Compression Elements,’’ Appendix C, AISC specification.
For additional discussion of lateral support, see Art. 7.12.2. Also, addition information on width-thickness ratios of compression elements is given in Fig. 7.29.
ASD for Shear in Flexural Members. The shear strength of a flexural member may be computed by dividing the total shear force at a section by the web area, the product of the web thickness and overall member depth. Whereas flexural strength normally controls selection of rolled shapes, shear strength can be critical when the web has cutouts or holes that reduce the net web area of when a shortspan beam carries a large concentrated load. Also, in built-up members, such as plate girders or rigid frame elements, shear often controls web thickness. 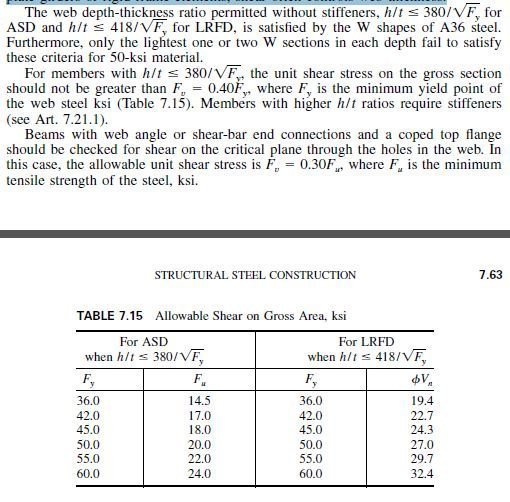 A special case occurs when a web lies in a plane common to intersecting members;
for example, the knee of a rigid frame. Then, shear stresses generally are high.
Such webs, in elastic design, should be reinforced when the web thickness is less than 32M/AbcFy, where M is the algebraic sum of clockwise and counterclockwise moments (in ft-kips) applied on opposite sides of the connection boundary, and Abc is the planar area of the connection web, in2 (approximately the product of the depth of the member introducing the moment and the depth of the intersecting member). In plastic design, this thickness is determined from 23Mp /AbcFy, where Mp is the plastic moment, or M times a load factor of 1.70. In this case, the total web shear produced by the factored loading should not exceed the web area (depth times thickness) capacity in shear. Otherwise, the web must be reinforced with diagonal stiffeners or a doubler plate.
For deep girder webs, allowable shear is reduced. The reduction depends on the ratio of clear web depth between flanges to web thickness and an aspect ratio of stiffener spacing to web depth. In practice, this reduction does not apply when the ratio of web depth to thickness is less than 380/F .