Selection of the most suitable lamp consistent with design objectives is critical to performance and cost of a lighting system. This decision should be carefully made before a luminaire for the lamp is selected. Luminaires are designed for specific lamps.
Lamps are constructed to operate at a specific voltage and wattage, or power consumption. In general, the higher the wattage rating of a specific type of lamp, the greater will be its efficacy, or lumen output per watt.

Greatest economy will be secured for a lighting installation through use of a lamp with the highest lumen output per watt with good quality of illumination. In addition to lumen output, however, color rendering and other characteristics, such as lighting distribution, should also be considered in lamp selection. Information on these characteristics can be obtained from lamp manufacturers. Latest data should be requested, because characteristics affecting lamp performance are changed periodically.

The following information usually is useful:
Lamp life, given as the probable number of hours of operation before failure.
Lamp efficacy, measured by the lamp output in lumens per watt of power consumed.
Lamp lumen depreciation, as indicated by tests. Curves are plotted from data to show the gradual decrease in light output with length of time of lamp operation.
The decrease occurs because of both aging and dirt accumulation (Art. 15.16.2).
The latter can be corrected with good maintenance, but the possible effects nevertheless should be considered in lighting design.
Lamp warm-up time, which is significant for some fluorescent lamps and all high-intensity-discharge lamps, for which there is a delay before full light output develops.
Lamp restart time, or time that it takes some lamps to relight after they have been extinguished momentarily. The lamps may go out because of low voltage or power interruption. Use of lamps with long warm-up and restart times should be avoided for spaces where lights are to be turned on and off frequently.
Color rendering index and color acceptability, which are, respectively, measures of the degree to which illumination affects the perceived color of objects and the human reaction to perceived colors (see Art. 15.12).
Voltages and frequency of current at which lamps are designed to operate. In most buildings in the United States, electricity is distributed for light and power as an alternating current at 60 Hz. Lamp output generally increases at higher frequencies but capital investment for the purpose is higher. Voltage often is about 120, but sometimes, especially for industrial and large commercial buildings, voltages of 208, 240, 277, or 480 are used, because of lower transmission losses and more efficient operation of electrical equipment. Direct current from batteries often is used for emergency lighting, when the prime ac source fails. Low-voltage (generally 12-V) lamps may be used outdoors, for safety reasons, when conductors are placed underground or where the lamps are immersed in water.
Noise, which is significant for some types of lamp applications, such as fluorescent and high-intensity-discharge lamps. These depend for operation on a device, called a ballast, which may hum when the light operates. Whether the hum will be annoying under ordinary circumstances depends on the ambient noise level in the room. If the ambient level is high enough, it will mask the hum. Before a combination of lamp, ballast, and fixture is selected, ballast noise rating should be obtained from the luminaire manufacturer.
Ambient temperature, or temperature around a lamp when it is operating, which may affect lamp life, lumen output, and color rendering. If the ambient temperature exceeds the rated maximum temperature for the luminaire, the life of incandescent lamps may be considerably reduced. Consequently, lamps rated at a wattage greater than that recommended by the fixture manufacturer should not be used. Also, provision should be made for dissipation of the heat produced by lamps.
Low ambient temperature slows starting of fluorescent and high-intensity-discharge  lamps. Low temperature also reduces lumen output and changes the color of fluorescent lamps.

The efficiency of a lighting system decreases with time because of dirt accumulation, decrease in lumen output as lamps age, lamp failures, and deteriorating lighting fixtures. Depending on type of fixtures, cleanliness of the environment, and time between cleanings of lamps and fixtures, lumen losses due to dirt may range from 8 to 10% in a clean environment to more than 50% under severe conditions. Also, the longer lamps operate, the dimmer they become; for example, a fluorescent lamp at the end of its life will yield only 80 to 85% of its initial lumen output. And when one or more lamps fail and are not replaced, the space being illuminated may suffer a substantial loss in light. Furthermore, in the case of lights operating with ballasts, the lamps, before burning out, overload the ballast and may cause it to fail. Consequently, a poorly maintained lighting installation does not provide the illumination for which it was designed and wastes money on the power consumed.

The design illumination level may be maintained by periodic cleaning and prompt replacement of aged or failed lamps. Relamping may be carried out by the spot or group methods. Spot relamping, or replacement of lamps one by one as they burn out, is more inefficient in use of labor and more costly. Group relamping calls for scheduled replacement of lamps at intervals determined from calculations based on expected lamp life and variation of lumen output with time. This method reduces labor costs, causes fewer work interruptions, maintains higher levels of illumination with no increase in cost of power, prevents the appearance of the lighting system from deteriorating, and reduces the possibility of damage to auxiliary equipment, such as ballasts, near the end of lamp life.
Because of the decrease in lamp output with time, in design calculations initial lamp output should be multiplied by a lamp lumen depreciation factor to correct for the effects of aging. This product equals the output after a period of time, usually the interval between group relampings. In addition, the output should be multiplied by a dirt depreciation factor. Both factors are less than unity. The two factors may be combined into a single maintenance factor M.

Incoming power for a lamp normally is by a local switch in the power circuit. The switch turns the lamps on or off by closing or opening the circuit.
An alternative method may be used that is more economical when the lamps are distant from the switch and that reduces the possibility of personal injury or short-circuit damage at the switch. In this method, the main power circuit is opened and closed by a relay located near the lamps. The relay, in turn, may be activated by low-voltage power controlled by a remote switch. Control-system voltages usually range between 6 and 24 V, obtained by stepping down the normal distribution voltage with transformers.
To prevent waste of energy by lighting in unoccupied rooms, occupancy sensors  may be installed. They sense entry of a person into a room and turn lights on. They also detect continued presence in the room and keep the lights on until after departure.

For control of light output from a luminaire, a control switch may be replaced with a dimmer. For incandescent lamps, this device can vary the voltage across the lamps from zero to the rated value and thus can be used to adjust the level of illumination. For fluorescent and high-intensity-discharge lamps, the dimmer is coordinated

with the lamp ballast.

Lamps that are commonly used may be generally classified as incandescent, fluorescent,
or high-intensity-discharge (HID). HID lamps include mercury-vapor, metal-halide, low-pressure sodium, and high-pressure sodium lamps. See Tables 15.8 and 15.9.
Incandescent Lamps. These lamps generate light by heating thin tungsten wires until they glow. The filaments are enclosed in a sealed glass bulb from which air is evacuated or that is filled with an inert gas, to prevent the heated tungsten from evaporating. In a tungsten-halogen incandescent lamp, for prolonged life, the filler gas contains halogens (iodine, chlorine, fluorine, and bromine), which restores to the filaments any metal that may evaporate.
Incandescent lamps are available in a variety of shapes. They also come with a variety of bases, making it necessary to ensure that selected luminaires provide sockets that can accommodate the desired lamps.
Incandescent lamps produce light mainly in the yellow to red portion of the spectrum. Color depends on the wattage at which the lamp is operated. Generally, the higher the wattage, the whiter is the color of light produced. A reduction in wattage or voltage results in a yellower light. See Tables 15.8 and 15.9 for other characteristics of incandescent lamps.
Often, the glass bulbs of these lamps are treated to obtain special effects. Usually, the effect desired is diffusion of the emitted light, to soften glare. For the purpose, the glass may be frosted, or etched, or silica coated (white bulb). Light diffusion and other effects can also be achieved with control devices incorporated in the fixtures, such as lenses or louvers (Figs. 15.13 to 15.16). Also, lamps may be treated with coatings or filters to produce any of a variety of colors.
Reflectorized incandescent lamps are made, with standard or special shapes, with a reflective aluminized or silver coating applied directly to part of the inside bulb surface. Such lamps are widely used for spot or flood lighting. Type PAR lamp has a parabolic shape to focus the light beam. Types EAR and ER lamps have elliptical shapes that cause the light beam to concentrate near the front of the lens, then to broaden into the desired pattern, yielding more usable light than other types of lamps, with little glare.
Compact fluorescent lamps often can be used, to reduce energy consumption significantly, in applications where incandescent lamps were used in the past.
Fluorescent Lamps. These lamps are sealed glass tubes coated on the inside surface with phosphors, chemicals that glow when bombarded by ultraviolet light. The tubes are filled with an inert gas, such as argon, and low-pressure mercury vapor.
Passage of an electric arc through the mercury vapor causes it to emit the ultraviolet rays that activate the phosphors to radiate visible light. The electric arc is started and maintained by cathodes at the ends of the glass tubes.
The high voltage needed to form the arc is provided initially by a device called a ballast. After the arc has been formed, the ballast limits the current in the arc to that needed to maintain it. Ballasts also may be designed to decrease the strobo scopic effect of the lamp output caused by the ac power supply and to keep the variation in current nearly in phase with the variation in voltage, thus maintaining a high power factor.

Fluorescent lamps generally are available as linear, bent U, compact configuration, or circular tubes, and luminaires are designed to be compatible with the selected shape.
Fluorescent lamps may be classified as preheat, rapid start, or instant start. They differ in the method used to decrease the delay in starting after a switch has been thrown to close the electrical circuit. The preheat type requires a separate starter, which allows current to flow for several seconds through the cathodes, to preheat them. For a rapid-start lamp, the cathodes are electrically preheated much more rapidly without a starter. For an instant-start lamp, high voltage from a transformer forms the arc, without the necessity of preheating the cathodes. 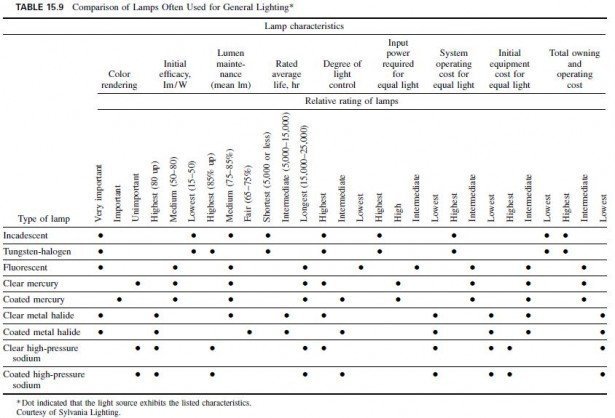 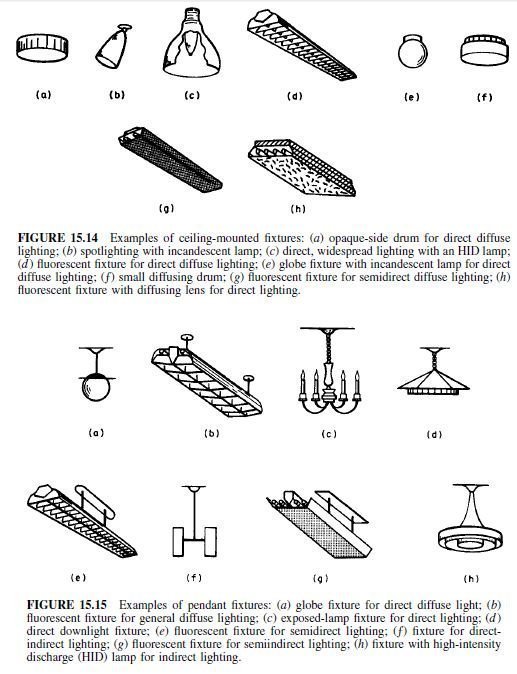