One commonly used system has a thermostat wired in series with the compressor  holding-coil circuit (Fig. 13.40). Thus the compressor will stop and start as called for by room conditions. The high-low pressure switch in series with the thermostat is a safety device that stops the compressor when the head pressure is too high and when the suction pressure approaches the freezing temperature of the coil. A liquid solenoid will shut off the flow of refrigerant when the compressor stops, to prevent
flooding the coil back to the compressor during the off cycle. This valve may be eliminated when the air-handling unit and compressor are close together.
A second type of control is the pump-down system (Fig. 13.41). The thermostat shuts off the flow of the refrigerant, but the compressor will keep running. With the refrigerant supply cut off, the back pressure drops after all the liquid in the coil vaporizes. Then, the high-low pressure switch cuts off the compressor.
Either of these two systems is satisfactory. However, the remainder of this discussion will be restricted to the pump-down system.
Additional safety controls are provided on packaged units to reduce compressor burnouts and increase the average life of these units. The controls include crankcase  heaters, motor-winding thermostats, and nonrecycling timers. These controls are usually prewired in the factory. The manufacturer supplies installation and wiring instructions for interconnecting the various components of the air-conditioning system.

Where city water is used for condensing purposes, an automatic water-regulator valve is supplied (usually by the manufacturer). Figure 13.42 shows a cross section of such a valve. The power element is attached to the hot-gas discharge of the compressor. As the head pressure builds up, the valve is opened more, allowing a greater flow of water to the condenser, thus condensing the refrigerant at a greater rate. When the compressor is shut off, the head pressure drops, the flow of water being cut off by the action of a power spring working in opposition of the power element. As the water temperature varies, the valve responds to the resulting head pressure and adjusts the flow automatically to maintain design head pressure. 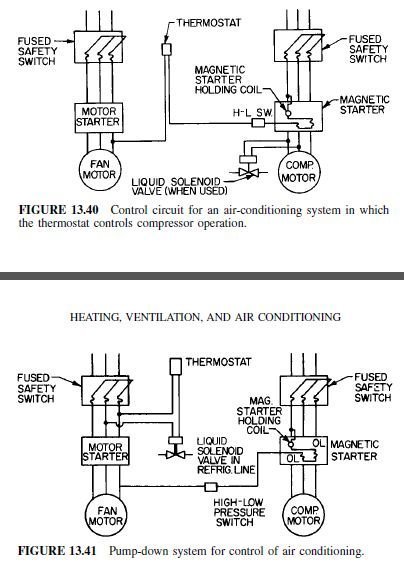 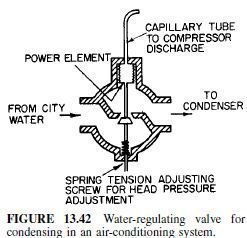 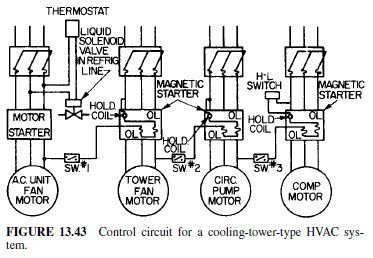 When a water tower is used, the automatic water-regulating valve should be removed from the circuit, because it offers too much resistance to the flow of water. It is not usually necessary to regulate the flow of water in a coolingtower system. For when the outside wet-bulb temperature is so low that the tower yields too low a water temperature, then air conditioning generally is not needed.
Figure 13.43 shows a simplified wiring diagram for a tower system. Because of the interconnecting wiring between the magnetic starters, the tower fan cannot run unless the air-conditioning fan is in operation. Also, the circulating pump cannot run unless the tower fan is in operation, and the compressor cannot run unless the circulating pump is in operation.
When the system is started, the air-conditioning fan should be operated first, then the tower via switch No. 1, the pump via switch No. 2, and the compressor via switch No. 3. When shutting down, switch No. 3 should be snapped off, then switch No. 2, then switch No. 1, and then the air-conditioning fan.

In buildings where one tower and pump are used to provide water for many units, pressure switches may be used in series with the holding coil of each compressor motor starter. No interconnecting wiring is necessary, for the compressor will not be able to run unless the pump is in operation and provides the necessary pressure to close the contacts on the pressure switch.
Some city ordinances require that indirect-expansion, or chilled-water, systems be installed in public buildings, such as theaters, night clubs, hotels, and depots.
This type of system is illustrated in Fig. 13.30. The refrigerant is used to cool water and the water is circulated through the cooling coil to cool the air. The water temperature should be between 40 and 45F, depending on whether the occupancy is a high latent load or a low latent load. Because the cost of equipment is increased and the capacity decreased as water temperature is lowered, most designers use 45F water as a basis for design and use a much deeper cooling coil for high-latentload installations.
The amount of chilled water in gallons per minute to be circulated may be obtained from

where T is the temperature rise of water on passing through the cooling coil, usually 8 or 10F. The smaller the temperature change, the more water to be circulated and the greater the pumping cost, but the better will be the heat transfer through the water chiller and cooling coil.
Coil manufacturers’ catalogs usually give the procedure for picking the number of rows of coil necessary to do the required cooling with the water temperatures available.
The water chiller should be sized to cool the required flow of water from the temperature leaving the cooling coil to that required by the coil at a given suction temperature.
Assuming 45F water supplied to the cooling coil and a temperature rise of 8F, the water leaving the coil would be at 53F. The chiller would then be picked to cool the required flow from 53 to 45F at 37F suction. The lower the suction temperature, the smaller will be the amount of heat-transfer surface required in the chiller. Also, the lower will be the compressor capacity. In no case should the suction temperature be less than 35F, since the freezing point of water—32F—is too close. A frozen and cracked chiller is expensive to replace.

A simplified control system for a chilled-water system with an evaporative condenser is shown in Fig. 13.44. 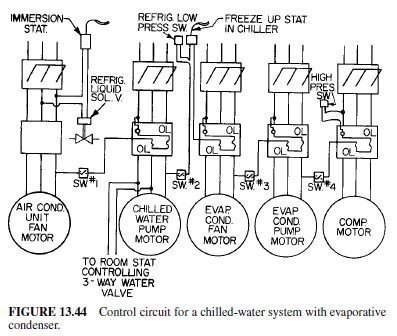