Structural members, such as arches, crane hooks, chain links, and frames of some machines, that have considerable initial curvature in the plane of loading are called curved beams. The flexure formula of Art. 5.5.10, ƒ = Mc/ I, cannot be applied to them with any reasonable degree of accuracy unless the depth of the beam is small compared with the radius of curvature.

Unlike the condition in straight beams, unit strains in curved beams are not proportional to the distance from the neutral surface, and the centroidal axis does not coincide with the neutral axis. Hence the stress distribution on a section is not linear but more like the distribution shown in Fig. 5.42c. 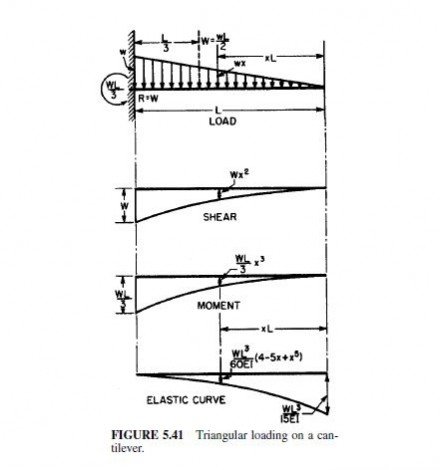 Just as for straight beams, the assumption that plane sections before bending remain plane after bending generally holds for curved beams. So the total strains are proportional
to the distance from the neutral axis. But since the fibers are initially of unequal length, the unit strains are a more complex function of this distance. In Fig. 5.42a, for example, the bending couples have rotated section AB of the curved beam into section AB through an angle d. If o is the unit strain at the centroidal axis and  is the angular unit strain d /d, then the unit strain at a distance y from the centroidal axis (measured positive in the direction of the center of curvature) is 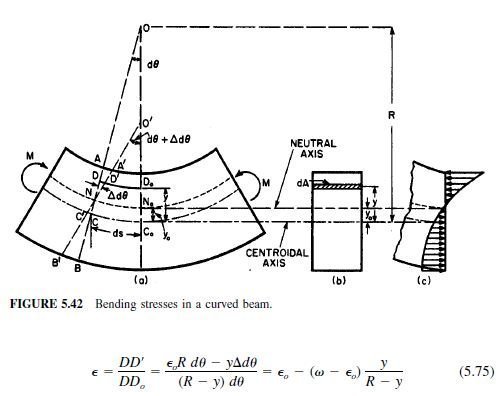 where R  radius of curvature of centroidal axis.
Equation (5.75) can be expressed in terms of the bending moment if we take advantage of the fact that the sum of the tensile and compressive forces on the section must be zero and the moment of these forces must be equal to the bending moment M. These two equations yield

Equation (5.78) for bending stresses in curved beams subjected to end moments in the plane of curvature can be expressed for the inside and outside beam faces in the form:

where c  distance from the centroidal axis to the inner or outer surface. Table 5.4 gives values of K calculated from Eq. (5.78) for circular, elliptical, and rectangular cross sections.
If Eq. (5.78) is applied to 1 or T beams or tubular members, it may indicate circumferential flange stresses that are much lower than will actually occur. The error is due to the fact that the outer edges of the flanges deflect radially. The effect is equivalent to having only part of the flanges active in resisting bending stresses.
Also, accompanying the flange deflections, there are transverse bending stresses in the flanges. At the junction with the web, these reach a maximum, which may be greater than the maximum circumferential stress. Furthermore, there are radial stresses (normal stresses acting in the direction of the radius of curvature) in the web that also may have maximum values greater than the maximum circumferential stress.
A good approximation to the stresses in I or T beams is as follows: for circumferential stresses, Eq. (5.78) may be used with a modified cross section, which is obtained by using a reduced flange width. The reduction is calculated from b  b, where b is the length of the portion of the flange projecting on either side from the web, b is the corrected length, and  is a correction factor determined from equations developed by H. Bleich,  is a function of b2 / rt, where t is the flange thickness and r the radius of the center of the flange:

where I  moment of inertia of modified section about its centroidal axis R  radius of curvature of centroidal axis c  distance from centroidal axis to center of the more sharply curved flange Because of the high stress factor, it is advisable to stiffen or brace curved I-beam flanges.
The maximum radial stress will occur at the junction of web and flange of I beams. If the moment is negative, that is, if the loads tend to flatten out the beam, the radial stress is tensile, and there is a tendency for the more sharply curved flange to pull away from the web. An approximate value of this maximum stress is

where K is a correction factor for the curvature [see Eq. (5.80)]. The sign of M is taken positive in this equation when it increases the curvature, and P is positive when it is a tensile force, negative when compressive.

Slope and Deflection of Curved Beams

If we consider two sections of a curved beam separated by a differential distance ds (Fig. 5.42), the change in angle d between the sections caused by a bending moment M and an axial load P may be obtained from Eq. (5.76), noting that d  ds/R. 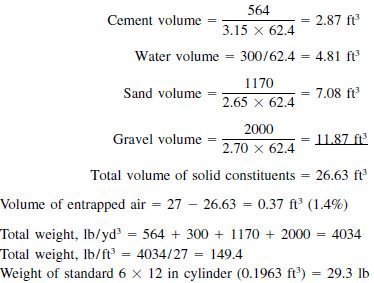 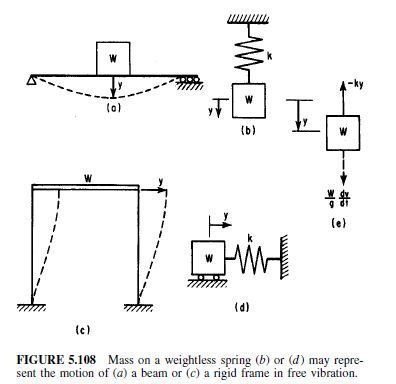