After air discharge grilles and the air handler, which consists of a heat exchanger and blower, have been located, it is advisable to make a single-line drawing showing the duct layout and the air quantities each branch and line must be able to carry.
Of the methods of duct design in use, the equal-friction method is the most practical. It is considered good practice not to exceed a pressure loss of 0.15 in of water per 100 ft of ductwork by friction. Higher friction will result in large power consumption for air circulation. It is also considered good practice to stay below a starting velocity in main ducts of 900 ft /min in residences; 1300 ft /min in schools, theaters, and public buildings; and 1800 ft /min in industrial buildings. Velocity in branch ducts should be about two-thirds of these and in branch risers about onehalf.
Too high a velocity will result in noisy and panting ductwork. Too low a velocity will require uneconomical, bulky ducts.

The shape of ducts usually installed as rectangular, because dimensions can easily be changed to maintain the required area. However, as ducts are flattened, the increase in perimeter offers additional resistance to airflow. Thus a flat duct requires an increase in cross section to be equivalent in air-carrying capacity to one more nearly square.
A 12 x 12-in duct, for example, will have an area 1 ft2 and a perimeter of 4 ft, whereas a 24 x 6-in duct will have the same cross-sectional area but a 5-ft perimeter and thus greater friction. Therefore, a 24 x  7-in duct is more nearly equivalent to the 12 x 12. Equivalent sizes can be determined from tables, such as those in the ‘‘ASHRAE Handbook—Fundamentals,’’ where rectangular ducts are rated in terms of equivalent round ducts (equal friction and capacity). Table 13.6 is a shortened version.
Charts also are available in the ASHRAE handbook giving the relationship between duct diameter in inches, air velocity in feet per minute, air quantity in cubic feet per minute, and friction in inches of water pressure drop per 100 ft of duct.
Table 13.7 is based on data in the ASHRAE handbook.
In the equal-friction method, the equivalent round duct is determined for the required air flow at the predetermined friction factor. For an example illustrating the method of calculating duct sizes, see Art. 13.11.
(H. E. Bovay, Jr., ‘‘Handbook of Mechanical and Electrical Systems for Buildings,’’ F. E. Beaty, Jr., ‘‘Sourcebook of HVAC Details,’’ and ‘‘Sourcebook of HVAC Specifications,’’ N. R. Grim and R. C. Rosaler, ‘‘Handbook of HVAC Design,’’ D. L. Grumman, ‘‘Air-Handling Systems Ready Reference Manual,’’ McGraw-Hill Publishing Company, New York; B. Stein et al., ‘‘Mechanical and Electrical Equipment for Buildings,’’ 7th ed., John Wiley & Sons, Inc., New York.) 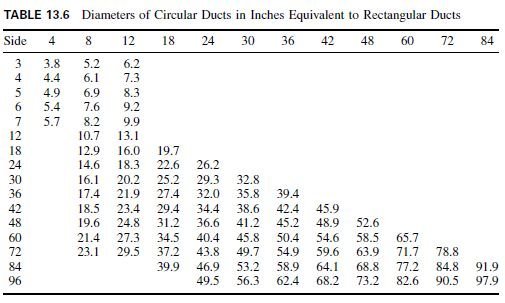