The seismic loads on the structure during an earthquake result from inertia forces which were created by ground accelerations. The magnitude of these loads is a function of the following factors: mass of the building, the dynamic properties of the building, the intensity, duration, and frequency content of the ground motion, and soil-structure interaction. In recent years, a lot of achievements have been made to incorporate these influential factors into building codes accurately as well as practically. The basis for IBC 2000 seismic provisions is the 1997 NEHRP ‘‘Recommended Provisions for the Development of Seismic Regulations for New Buildings and Other Structures’’ (FEMA 302). The National Earthquake Hazard Reduction Program (NEHRP) is managed by the Federal Emergency Management Agency (FEMA).
In IBC 2000, the seismic loads are on a strength level limit state rather than on a service load level, which was used in UBC 94 and prior versions. The seismic limit state is based upon system performance, not member performance, and considerable energy dissipation through repeated cycles of inelastic straining is assumed.

In IBC 2000, the following basic information is required to determine the seismic loads:
1. Seismic Use Group According to the nature of Building Occupancy, each structure is assigned a Seismic Use Group (I, II, or III) and a corresponding Occupancy Importance (I) factor (I  1.0, 1.25, or 1.5).
Seismic Use Group I structures are those not assigned to either Seismic Use Group II or III. Seismic Use Group II are structures whose failure would result in a substantial public hazard due to occupancy or use. Seismic Use Group III is assigned to structures for which failure would result in loss of essential facilities required for post-earthquake recovery and those containing substantial quantities of hazardous substances.
2. Site Class Based on the soil properties, the site of building is classified as A, B, C, D, E, or F to reflect the soil-structure interaction. Refer to IBC 2000 for Site Class definition.
3. Spectral Response Accelerations SS and S1 The spectral response seismic design maps reflect seismic hazards on the basis of contours. They provide the maximum considered earthquake spectral response acceleration at short period SS and at 1-second period S1. They are for Site Class B, with 5% of critical damping. Refer to the maps in IBC 2000.
4. Basic Seismic-Force-Resisting System Different types of structural system have different energy-absorbing characteristics. The response modification coefficient  R in Table 5.9 is used to account for these characteristics. Systems with higher ductility have higher R values.

With the above basic parameters available, the following design and analysis criteria can be determined.
Seismic Design Category. The Seismic Design Category is based on the seismic group and the design spectral response acceleration coefficients, SDS and SD1, which will be explained later. The Seismic Design Category for a structure can be determined in accordance with Tables 5.10 and 5.11.
Seismic Design Categories are used to determine the permissible structural systems, the limitations on height and irregularity of the structural components that must be designed for seismic resistance and the types of lateral force analysis that must be performed.
Seismic Use Groups I and II structures located on sites with mapped maximum considered earthquake spectral response acceleration at 1-second period S1, equal to or greater than 0.75g, shall be assigned to Seismic Design Category E. Seismic Use Group III structures located on such sites shall be assigned to Seismic Design Category F. A structure assigned to Seismic Design Category E or F shall not be sited where there is the potential for an active fault to cause rupture of the ground surface at the structure.
Building Irregularity. Building with irregular shapes, changes in mass from floor to floor, variable stiffness with height, and unusual setbacks do not perform well during earthquakes. Thus, for each type of these irregularities, additional design requirements shall be followed to maintain seismic-resisting capacity. IBC 2000 requires that all buildings be classified as regular or irregular based on the plan and vertical configuration. See Tables 5.12 and 5.13 for classification and corresponding requirements.
Design Requirements for Seismic Design Category A. Structures assigned to Seismic Design Category A need only comply with the following:
• Structure shall be provided with a complete lateral-force-resisting system designed to resist the minimum lateral force, of 1% floor gravity load.
The gravity load should include the total dead load and other loads listed below.
• In areas used for storage, a minimum of 25% of the reduced floor live load (floor live load in public garages and open parking structures need not be included)
• Where an allowance for partition load is included in the floor load design, the actual partition weight or a minimum weight of 10 psf of floor area (whichever is greater)
• Total operating weight of permanent equipment
• 20% of flat roof snow load where flat roof snow load exceeds 30 psf
• The direction of application of seismic forces used in design shall be that which will produce the most critical load effect in each component. The design seismic forces are permitted to be applied separately in each of two orthogonal directions and orthogonal effects are permitted to be neglected.
• The effect of this lateral force shall be taken as E in the load combinations.
Special seismic load combinations that include Em need not to be considered. 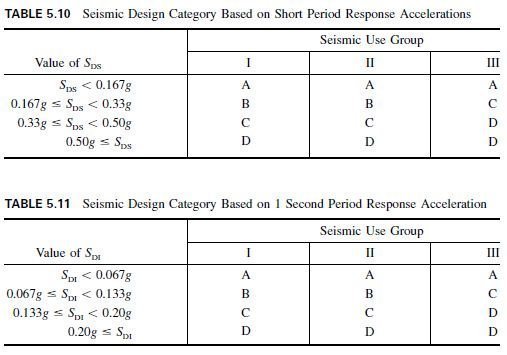 Where Em equals the earthquake force where seismic forces and dead loads counteract.
• All parts of the structure between separation joints shall be interconnected, and the connections shall be capable of transmitting the seismic force induced in the connection by the parts being connected. Any smaller portion of the structure shall be tied to the remainder of the structure with 5% the weight of the smaller portion. A positive connection for resisting horizontal forces acting on the member shall be provided for each beam, girder, or truss to its support. The connection shall have strength sufficient to resist 5% of the dead and live load vertical reaction applied horizontally.
Analysis Procedures for Seismic Design Categories B, C, D, E, and F. For Seismic Design Categories B and C, IBC 2000 proposed equivalent lateral-load force procedure shall be used. A more rigorous analysis is permitted, too. However, for Seismic Design Categories D, E, and F, the analysis procedures are identified in Table 5.14.

Ground motion accelerations, represented by response spectra and coefficients derived from these spectra, shall be determined in accordance with the general procedure or the site-specific procedure. The later procedure shall be used for structures on sites classified as Site Class F.
General Procedure for Determining Maximum Considered Earthquake and Design Spectral Response Accelerations. The maximum considered earthquake spectral response accelerations maps only provide values for Site Class B at short period (SS) and at 1-second period (S1) and they need to be adjusted for site class effects, by site coefficient Fa and Fv. (See Tables 5.15 and 5.16.) 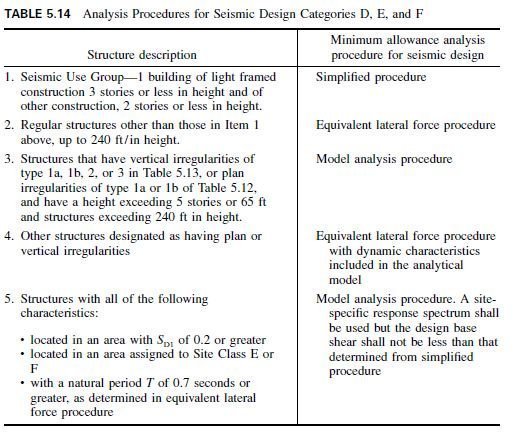 The corresponding design spectral response accelerations at short periods and at 1 second are: 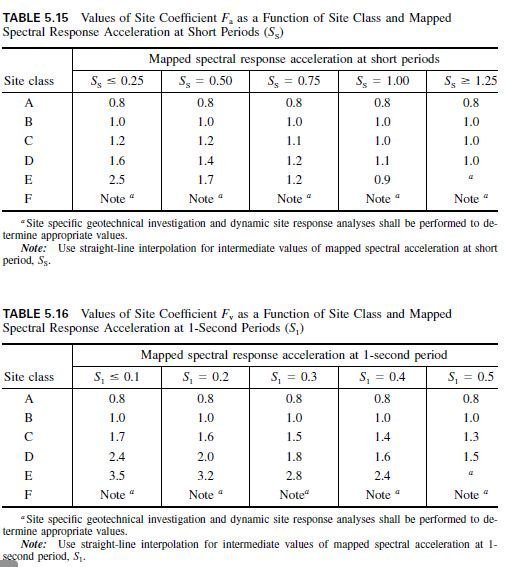 Site Specific Procedures for Determining Design Spectral Response Accelerations • A site specific study shall account for the regional seismicity and geology; the expected recurrence rates and maximum magnitudes of events on known faults and source zones; the location of the site with respect to these; near source effects, if any; and the characteristics of subsurface site conditions.
• The probabilistic maximum considered earthquake ground motion shall be taken as that motion represented by an acceleration response spectrum having a 2% probability of exceedance within a 50-year period. The probabilistic maximum considered earthquake spectral response acceleration at any period, SaM, shall be taken from the 2% probability of exceedance within a 50-year period spectrum (where SaM exceeds the deterministic limit shown in Fig. 5.114.) 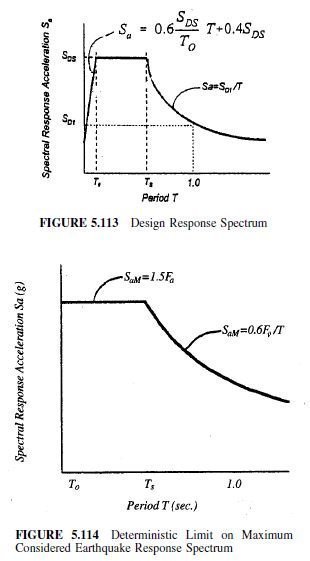 where Cs is the response coefficient and W is the effective seismic weight of the structure, including the total dead load and other loads listed below:
1. In areas used for storage, a minimum of 25% of the reduced floor live load (floor live load in public garages and open parking structures need not be included)
2. Where an allowance for partition load is included in the floor load design, the actual partition weight or a minimum weight of 10 psf of floor area (whichever is greater)
3. Total operating weight of permanent equipment
4. 20% of flat roof snow load where the flat roof snow load exceeds 30 psf
The seismic response coefficient, CS, shall be determined in accordance with the following formula: 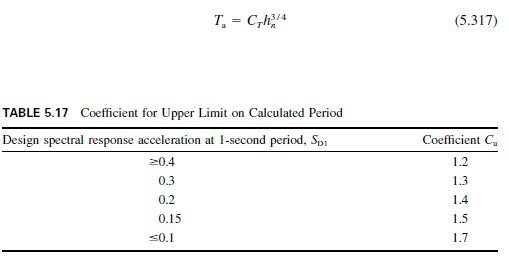 Rigid Diaphragms. For rigid diaphragms the seismic design story share, Vx shall be distributed to the various vertical elements of the seismic force-resisting system in the story under consideration based on the relative lateral stiffness of the vertical force resisting elements and the diaphragm.
For flexible diaphragms, seismic design story shear, Vx shall be distributed to various vertical elements based on the tributary area of the diaphragm to each line of resistance. For the purpose of this section, the vertical elements of the lateral force-resisting system are permitted to be considered to be in the same line of resistance, if the maximum out-of-plane offset between each of the elements is less than 5% of the building dimension perpendicular to the direction of lateral load.
Torsion. Where diaphragms are not flexible, the design shall include the torsional moment Mt, resulting from the difference in locations of the center of mass and the center of stiffness. Also where diaphragms are not flexible, in addition to the torsional moment, the design shall include accidental torsional moments Mta, caused by assumed displacement of the center of mass, each way from its actual location, by a distance equal to 5% of the dimension of the building perpendicular to the direction of the applied forces.
Dynamic Amplification of Torsion. For a structure in Seismic Design Category C, D, E, or F, where Type 1a or 1b plan torsional irregularity exists, effects of torsional irregularity shall be accounted for by multiplying the sum of Mt plus Mta at each level by a torsional amplification factor, Ax, determined from the following formula:

The torsional amplification factor, Ax, is not required to exceed 3.0. The more severe loading for each element shall be considered for design.
Overturning. The building shall be designed to resist overturning effects caused by the seismic forces. At any story, the increment of overturning moment in the story under consideration shall be distributed to the various vertical force-resisting elements in the same proportion as the distribution of the horizontal shears to those elements.
The overturning moments at level x, Mx shall be determined from the following formula:

The Overturning Moment Reduction Factors are

The value of  shall not be less than 1.0, and need not exceed 1.5.
For structures with seismic force resisting systems in any direction comprised solely of special moment frames, the seismic force-resisting system shall be configured such that the value of  calculated in accordance with this section does not exceed 1.25 for structures assigned to Seismic Design Category D, and does not exceed 1.1 for structures assigned to Seismic Design Category E or F.
Deflections and Drift Limits. The design story drift shall not exceed the allowable story drift a, as obtained from Table 5.18 for any story. All portions of the building shall be designed to act as an integral unit in resisting seismic forces unless separated structurally by a distance sufficient to avoid damaging contact under total deflection Sx.

In order to provide a more reliable and consistent level of seismic safety in new building construction, IBC 2000 includes a much larger set of provisions on proportioning and detailing structural members and system. The Code requirements are based on Seismic Design Category. These special requirements are for items such as openings in shear walls and diaphragms, diaphragm design, collector element design, design of bearing walls and shear walls and their anchorage, direction  of seismic load impact, and so on. It is very important that the design engineer be familiar with requirements. 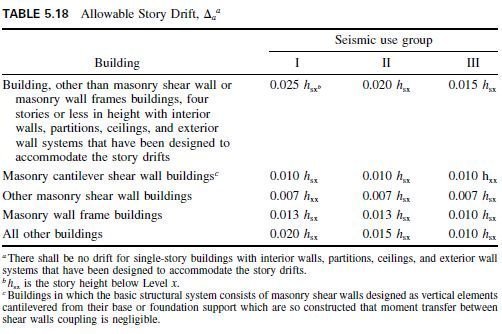 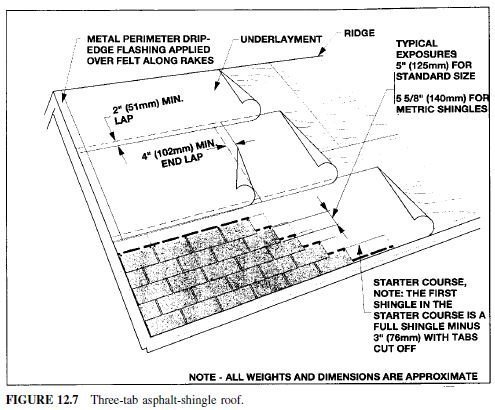