A hoistway is a shaft in which an elevator travels. To provide access to an elevator car, the shaft enclosure has openings, protected by doors with safety devices, at landings. In a pit at the bottom of the hoistway, buffers or bumpers must be installed to stop a descending car or counterweight beyond its normal limit of travel, by storing or by absorbing and dissipating its kinetic energy (Fig. 16.12). Construction of the hoistway and installation of the associated equipment should meet the requirements of the ‘‘American National Standard Safety Code for Elevators, Dumbwaiters, Escalators and Moving Walks,’’ ANSI A17.1.

The code requires that hoistways be enclosed throughout their height with fireresistant construction, except for cases where no solid floors are penetrated. The enclosure should have a 2-h fire rating, and hoistway doors and other opening protective assemblies should have a 11⁄2-h rating. Where fire-resistant construction is not required, laminated-glass curtain walls or unperforated metal, such as 18-ga sheet steel, should enclose the hoistway to a height of 8 ft above each floor and above the treads of adjacent stairways. Openwork enclosures may be used above that level, if openings are less than 2 in wide or high.

In significant high-rise-building fires, the elevator hoistways have served as a flue for smoke and hot gases generated by fire. The prevailing thought has been that hoistway venting means could minimize the spread of smoke and hot gases throughout the building. As more has been learned about smoke movement in high-rise buildings, many alternatives have been developed to prevent migration of smoke from the fire floor to noninvolved floors of the structure. Among these alternatives are various systems for hoistway pressurization and mechanical-pressure sandwich systems, where building ventilating units are used to contain smoke during a fire.
Although many codes continue to require specific means to address elevator hoistway venting, the overall design for smoke control in the building should be considered in design of elevator hoistways. Consideration for building occupants who may be threatened by fire requires designers to view the structure in a holistic fashion, where all systems can be integrated to maximize life-safety opportunities.
The proposed design should be reviewed by the architect, mechanical engineer, and fire protection engineer to ensure that the finished result achieves goals set for the building’s life-safety capabilities. The importance of proper elevator hoistway design in high-rise buildings cannot be overemphasized.

In machine rooms at the top of the hoistway, headroom of at least 7 ft above the floor must be provided. For spaces containing only overhead, secondary, or  deflecting sheaves, headroom may be only 31⁄2 ft, but 41⁄2 ft is required if the spaces also contain overspeed governors, or other equipment.

Each opening in a hoistway enclosure for access to elevator cars should be protected with a 11⁄2-h fire-rated door for the full width and height of the opening. ANSI A17.1 lists types of doors that may be used and gives requirements for their openings.
Generally, however, single-section swinging doors or horizontally sliding doors are used for freight and passenger elevators and vertically sliding doors are used exclusively for freight elevators.
Horizontally sliding or swinging doors for automatic elevators should be  equipped with door closers. They should close open doors automatically if the car leaves the landing zone. (A landing zone is the space 18 in above and below a landing.) A horizontally sliding hoistway door may be kept open while a car is at a landing, but only while the car is being loaded and unloaded or when the door is under the control of an operator or an automatic elevator dispatching system.
For safety reasons, normal operation of the elevator car in a hoistway should not be possible unless all hoistway doors are closed and preferably also locked. For the purpose, the doors should be equipped with door-locking devices, hoistway access switches, and parking devices. A locking device holds a door closed, preventing it from being opened on the landing side, except for repair, maintenance or emergency purposes. An access switch is placed at a landing and operated to permit movement of a car with the car door and the hoistway door at the landing open, for access to the top of the car or to the hoistway pit. A parking device is  used to open or close a hoistway door from the landing side at any landing if a car is within the landing zone. Unless all hoistway doors automatically unlock as a car enters their landing zones, at least one landing of the hoistway should be provided with a parking device.
ANSI A17.1 also requires that hoistway doors be equipped with hoistway-unitsystem interlocks. These consist of electric contacts or mechanical locks, or a combination of these devices, that prevent operation of the elevator driving machine by the normal operating device unless all hoistway doors are closed and locked.
Hoistway doors should be openable by hand from the hoistway side from a car within the interlock unlocking zone, except when the doors are locked out of service.
(Doors at the main-entrance landing or at the top or bottom terminal landing should be incapable of being locked out of service, so that some means of access to the hoistway is always available.) Automatic fire devices controlled by heat should not lock any hoistway door so that it cannot be opened manually from inside the hoistway nor lock any exit leading from a hoistway door to the outside.
Vision panels of clear wired glass or laminated glass, with an area between 25 and 80 in2, may be inserted in any type of hoistway door and car door, to enable passengers in a car to see if passengers at landings are waiting to enter. ANSI A17.1, however, specifically requires such a vision panel to be installed in all horizontally swinging hoistway doors and in manually operated, self-closing, sliding hoistway doors for elevators with automatic or continuous-pressure operation. But the code does not require a vision panel at landings for automatic elevators provided with a device that indicates the location of the car in the hoistway (hall position indicator).

The paths of elevator cars and of counterweights, if used, are controlled by vertical guide rails installed in the hoistway. The rails usually are T shaped in cross section and have smooth guiding surfaces along which the car wheels roll. A rail is installed on each side of the shaft to guide the car (Fig. 16.13). When a counterweight is used with electric elevators, to reduce power requirements, a second pair of rails is placed along one wall of the shaft, to guide the counterweight.
The elevator manufacturer usually supplies and installs the guide rails. The owner is responsible for the building structure that supports them.

Energy-absorbing devices are required at the bottom of a hoistway to absorb the impact from a car that descends below its normal limit of travel (Fig. 16.12a).
ANSI A17.1 specifically requires buffers under cars and counterweights in hoistways over accessible spaces. The code also requires buffers or solid bumpers in the pits for passenger elevators with speeds up to 50 ft /min and for freight elevators with speeds up to 75 ft /min, but buffers are required for greater speeds. Oil buffers may be used under elevators at any rated speed, but spring buffers may be used only for speeds up to 200 ft /min.
Solid bumpers, which are permissible only for slow elevators, may be made of wood or other resilient material. As the name implies, spring buffers use springs, whereas oil buffers use the hydraulic pressure of oil against a plunger contacted by a descending car, to bring the car to a gradual stop.

The National Elevator Industry standard, ‘‘Elevator Engineering Standard Layouts,’’ lists clear inside dimensions required for hoistways for elevator cars covered by the standard. Standard sizes may be modified to meet specific building or structural requirements, so long as adequate clearances are maintained for guide rails and machinery installation. When actual sizing is outside of manufacturer’s recommendations, it should be reviewed by the manufacturer or consultant to ensure sufficient room is permitted for the installation. The Americans with Disabilities Act lists specific elevator car sizes required for access to buildings.
For proper elevator operation and for safety, both maximum and minimum clearances between hoistways and cars and other moving equipment, as recommended by elevator manufacturers and ANSI A17.1, should be provided. The clearance between a car and the hoistway enclosure, for example, should be at least 3⁄4 in, except on the sides used for loading and unloading. The clearance between the carplatform sill and vertically sliding hoistway doors or the hoistway edge of the landing sill should be at least 1⁄2 in where side door guides are used and 3⁄4 in where corner guides are used, but not more than 11⁄2 in. Maximum clearance between the loading side of the car platform and the hoistway enclosure generally is  5 in but may be as much as 71⁄2 in when vertically sliding hoistway doors are used. 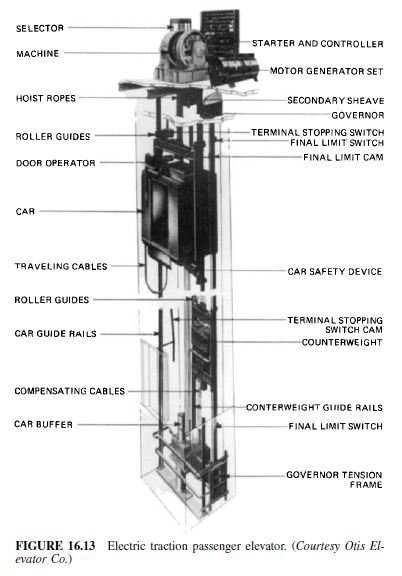