Flexural design strength should be based on factored loads and the assumptions of the ACI 318 Building Code, as explained in Art. 9.44. The stress ƒps in the tendons at factored load (1.4D + 1.7L, where D is the dead load and L the live load), however, should not be assumed equal to the specified yield strength. High-strength prestressing steels lack a sharp and distinct yield point, and ƒps varies with the ultimate (tensile) strength of the prestressing steel ƒpu, the prestressing steel percentage p, and the concrete strength at 28 days. A stress-strain curve for the ƒ’c prestressing steel being used is necessary for stress and strain compatibility computations of ƒps. For unbonded tendons, successive trial-and-error analysis of tendon strain for strength design is straightforward but tedious. Assume a deflection at failure by crushing of the concrete (strain  0.003 in / in). Determine from the stress-strain curve for the tendon steel the tendon stress corresponding to the total tendon strain at the assumed deflection. Proceed through successive trials, varying  the assumed deflection, until the algebraic sum of the internal tensile and compressive forces equals zero. The moment of the resulting couple comprising the tensile and compressive forces times  @ = 0.90 is the design moment strength.

Stress in Bonded Tendons. When such data are not available, and the effective prestress, after losses, ƒse is at least half the specified ultimate strength ƒpu of the tendons, the stress ƒps in bonded tendons at nominal strength may be obtained from 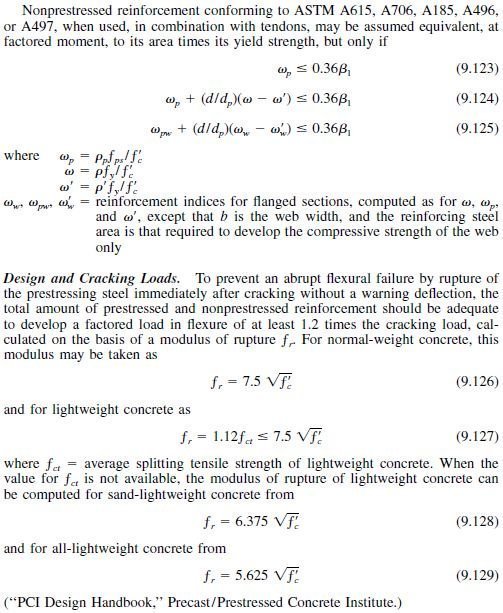