Also known as lag bolts, lag screws are large screws with a square or hexagonal bolt head. As is the case with bolts and timber connectors, lag screws are used where relatively heavy loads have to be transmitted in a connection. They are used in lieu of bolts where the components of a joint are so thick that an excessively  long bolt would be needed, where one side of a connection is not accessible, or where heavy withdrawal loads have to be resisted. If desired, lag screws can be used in conjunction with split rings and shear plates.

Lag screws are turned with a wrench into prebored holes with total length equal to the nominal screw length. Soap or other lubricant may be used to facilitate insertion and prevent damage to screws. Two holes are drilled for each lag screw.
The first and deepest hole has a diameter, as specified in the NDS for various species, depending on the wood density, ranging from 40 to 85% of the shank diameter. The second hole should have the same diameter as the shank, or unthreaded portion of the lag screw, and the same depth as the unthreaded portion.
The NDS contains design values and design provisions for lag screws that conform to ANSI/ASME Standard B18.2.1. Lag screws loaded in withdrawal should be designed for allowable tensile strength in the net (root-of-thread) section as well as for resistance to withdrawal. For single-shear wood-to-wood connections, the lag screw should be inserted in the side grain of the main member with the screw axis perpendicular to the wood fibers. Minimum edge and end distances and spacing for a lag screw are the same as for a bolt with diameter equal to the shank diameter of the screw (Tables 10.34 to 10.36). 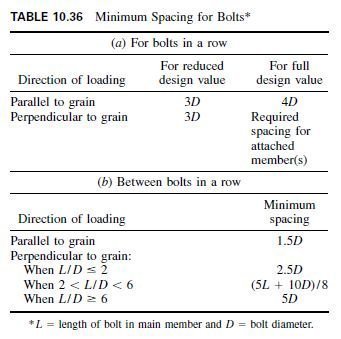