Formwork should be capable of supporting safely all vertical and lateral loads that might be applied to it until such loads can be supported by the ground, the concrete structure, or other construction with adequate strength and stability. Dead loads on formwork consist of the weight of the forms and the weight of and pressures from freshly placed concrete. Live loads include weights of workers, equipment, material storage, and runways, and accelerating and braking forces from buggies and other placement equipment. Impact from concrete placement also should be considered in formwork design.

Horizontal or slightly inclined forms often are supported on vertical or inclined support members, called shores, which must be left in place until the concrete placed in the forms has gained sufficient strength to be self-supporting. The shores may be removed temporarily to permit the forms to be stripped for reuse elsewhere, if the concrete has sufficient strength to support dead loads, but the concrete should then be reshored immediately. Loads assumed for design of shoring and reshoring of multistory construction should include all loads transmitted from the stories above as construction proceeds.

This pressure may be estimated from

The calculated form pressures should be increased if concrete unit weight exceeds 150 pcf, cements are used that are slower setting than standard portland cement, slump is more than 4 in. with use of superplasticizers, retarders are used to slow set, the concrete is revibrated full depth, or forms are externally vibrated.
Under these conditions, a safe design assumes that the concrete is a fluid with weight w and pmax = wh for the full height of placement.

Best practice is to consider all known vertical loads, including the formwork itself, plus concrete, and to add an allowance for live load. This allowance, including workers, runways, and equipment, should be at least 50 psf. When concrete will be distributed from overhead by a bucket or by powered buggies, an additional allowance of at least 25 psf for impact load should be added. Note that the weight of a loaded power buggy dropping off a runway, or an entire bucket full of concrete  dropped at one spot, is not considered and might exceed designs based on 50- or 75-psf live load. Formwork should be designed alternatively, with continuity, to accept such spot overloads and distribute them to various unloaded areas, or with independently braced units to restrict a spot overload to a spot failure. The first alternative is preferable. 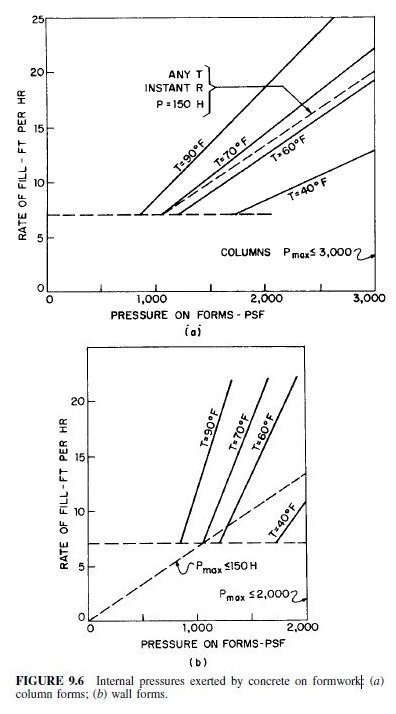 Most failures of large formwork are ‘‘progressive,’’ vertically through several floors, or horizontally, as each successive line of shoring collapses like a house of cards.
To eliminate all possibility of a large costly failure, the overall formwork shoring system should be reviewed before construction to avoid the usual ‘‘house-of-cards’’ design for vertical loads only. Although it is not always possible to foresee exact sources or magnitudes of lateral forces, shoring for a floor system should be braced to resist at least 100 lb / lin ft acting horizontally upon any of the edges, or a total lateral force on any edge equal to 2% of the total dead loads on the floor, whichever is larger.
Wall forms should be braced to resist local building-code wind pressures, plus at least 100 lb / lin ft at the top in either direction. The recommendation applies to basement wall forms even though wind may be less, because of the high risk of personal injury in the usual restricted areas for form watchers and other workers.