When the locking bolt is rectangular in shape, it does not slide into position automatically when the door is closed; it must be projected or retracted by a thumb turn or key. This type of bolt is referred to as a dead bolt, and the lock as a dead lock. It may be worked with a key from one or both sides. Such a bolt is often used in conjunction with a latch. When the latch bolts and dead bolts are combined into one unit, it is known as a lock. 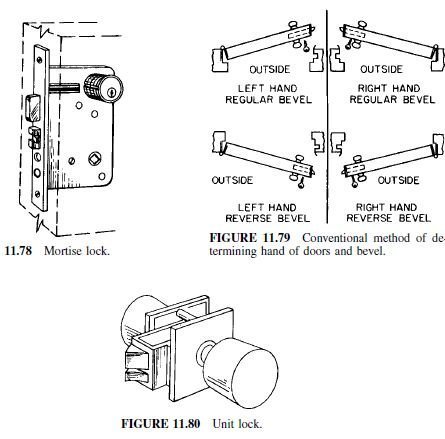 For keyed locks that do not have dead bolts, it is desirable that the latchbolt be equipped with a dead latch (Fig. 11.82). This is a small plunger or an auxiliary dead latch (Fig. 11.80) that is held depressed when the door is closed and ‘‘deadlocks’’ the latch bolt so that it cannot be retracted by a shim, card, or similar device inserted between latch and door frame.
Various combinations of latches, dead bolts, knobs and keys, and locking buttons are applied to all types and kinds of doors. The exact combination most suitable for any given door is determined by a careful analysis of the use to which the door is to be put.
A point to bear in mind is that a uniform size should be selected, if practicable, for a project, no matter what the individual functions of the different locks may be.
This makes possible the use of standard-size cutouts or sinkages on each installation.
When this is done, not only is the cost of installation reduced, but any changes  that may be made in the drawings as the job progresses, or any changes that may have to be made later are simplified, and special hardware is avoided.

Unit locks (Fig. 11.80) are complete assemblies that eliminate most of the adjustments during installation that would otherwise be necessary. These locks have merely to be slipped into a standard notch cut into a wood door or formed in a metal door.
Bored-in locks are another type that can be installed by boring standard-size  holes in wood doors or by having uniform circular holes formed in metal doors.
These bored-in locks are often referred to as tubular-lock sets or cylindrical-lock sets depending on how the holes have to be bored to accommodate them.
Tubular locks have a tubular case extending horizontally at right angles to the edge of the door. This type of case permits a horizontal hole of small diameter to be bored into the door at right angles to the vertical edge of the door; another small hole is required at right angles to the first hole to take care of the latching mechanism.
Most tubular locks now produced fit the standard bores in steel doors conforming to ANSI A115.2 and A115.3, just as do cylindrical locks. 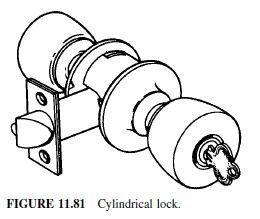 Cylindrical locks (Fig. 11.81), the other type of bored-in lock, have a cylindrical case requiring a relatively large-diameter hole in the door, bored perpendicular to the face of the door.
This hole accommodates the main body of the lock. A hole of smaller diameter to take the latch bolt must be bored at right angles to the edge of the door.
When bored-in locks are used in hollow metal doors, a reinforcing unit is required in the door. This unit is generally supplied by the door manufacturer.
Exit devices are a special series of locks required by building codes and the National Fire Protection Association ‘‘Life Safety Code’’ on certain egress doors in public buildings. On the egress side, there is a horizontal bar running a minimum of one-half the width of the door. When pressed against, the bar releases the locking or latching mechanism, allowing the door to open. These devices are required to be labeled for safe egress by a nationally recognized independent testing laboratory.
When used on fire doors, they must carry an additional label showing that the devices have also been investigated for fire. They then bear the name ‘‘fire exit hardware.’’ These devices are available with various functions, including arrangements for having them locked from the outside and openable with a key. For all functions, however, they must be openable from the inside by merely depressing the cross bar.

Locking Bolts (Doors and Windows). Various types of bolts and rods are fastened to doors and windows for the purpose of securing them in closed position or to other doors and windows. Flush bolts and surface bolts, manual or automatic, are often used.
Top and bottom vertical bolts operated by a knob located at convenient height between them are known as cremorne bolts.
Keys. Locks are further classified according to the type of key required to retract the bolts. On all but the cheaper installations the principal type of key used is the cylinder key, which operates a pin-tumbler cylinder.

In the preceding locks, the locking cylinder, which is the assembly that supplies the security feature of the lock, is a cylindrical shell with rotatable barrel inside.
The barrel has a longitudinal slot or keyway formed in it. The cross section of the keyway for every lock has a shape requiring a similarly designed key. Several holes (usually five or six) are bored through the shell and into the barrel at right angles to the axis of the barrel (Fig. 11.82). In each hole is placed a pair of pins—a driver pin in the shell end and a tumbler pin in the barrel end. Pins vary in length, and the combination of lengths differs from that of pins in other locks. A spring mounted in the shell end of each hole behind each driver pin forces these pins into the hole in the barrel, so that normally they are partly in the barrel portion of the hole and partly in the shell portion. Thus, the barrel is prevented from rotating in  the shell to operate the bolt, and the door remains locked.
Keys have notches spaced along one side to correspond with the spacing and length of the pins. When a key is inserted in the slot in the barrel, each notch forces a tumbler pin back, against pressure from the spring. When the proper key is inserted in the slot, each notch pushes its corresponding pair of pins just far enough back into the shell to bring the junction point of that pair exactly at the circumference of the barrel. The barrel then can be rotated within the shell by merely turning the key.
Turning the key operates a cam attached to the end of the barrel. The cam withdraws the bolt from its locked position. 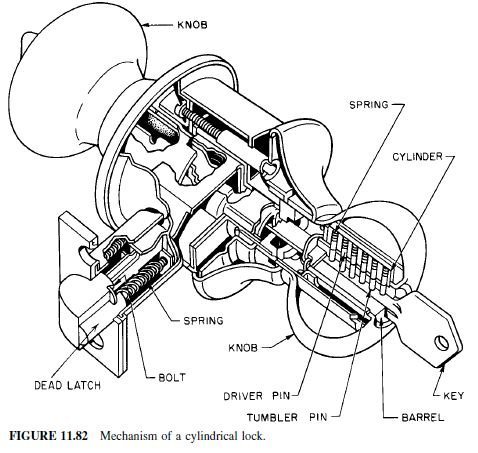 The security feature of the cylinder lock results from the fact that only one series of notches in the key will correspond to the respective lengths of the several individual pins. With as many as five or six tumblers, it is apparent that many combinations are available.
By using split pins, different keyways, and various sizes and arrangements of the pins, master keying and grand master keying of cylinder locks are made possible.
Thus one master key may be made to open all the separate locks on each floor of a building, while a grand master key will open any lock in any floor of that building. In case there are a number of such buildings in a group, a great-grand master key can be made that will open any door on any building in the group.
Security Precautions. The security of a building from the standpoint of unauthorized entry and life safety is affected by the proper selection of hardware. Although locks are important for security, the total system, including the building design, must be considered. A lock installed in a door that is loosely fitted in the frame may be ineffective. Hollow metal and aluminum frames that are not reinforced and anchored properly are easily ‘‘spread,’’ and undetectable entry can result.
In high levels of master keying, more split pins must be used, and thus more  ‘‘shear lines’’ are established. This makes the cylinder easier to pick. Hence, unnecessarily complicated master key systems should be avoided.
A good security lock is available with a dead bolt and a deadlocking latch bolt.
Both bolts are retractable in one operation, merely by turning the inside knob. This satisfies requirements for security against unauthorized entry and life safety.
Hardware requirements for life safety and fire doors are covered by two National Fire Protection Association Standards, ‘‘Life Safety Code’’ and ‘‘Fire Doors and Windows.’’ Both are incorporated in many building codes. 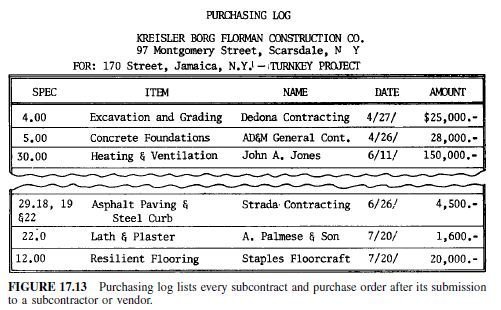