Sound travels via elastic media. Hard, rigid, dense materials make excellent transmission paths, because they can accept much energy readily. Sound velocity is inversely proportional to the density of the medium, as can be seen from Eq. (11.9).

where k is a constant. Usually, however, dense materials often have a much larger modulus of elasticity than less dense materials, and the effect of the modulus more  than offsets the effects of density. Sound does not travel faster in dense media than in less dense media. Table 11.21 lists the velocity of sound in some common materials.
Another characteristic of materials, very important to their acoustical performance, is acoustical impedance. This value is determined by multiplying the velocity of sound in the material by the density of the material. An examination of the units resulting from this operation will show that this is a way of measuring the rate at which the material will accept energy. Table 11.22 lists the acoustical impedance of several typical materials used in building construction.
In most cases of interest, a human is the ‘‘receiver’’ in the source-path-receiver chain. Hearing is the principal subjective response to sound. Within certain limits of frequency and energy levels, sound creates a sensation within the auditory equipment of humans and most animals.
At very low frequencies or at very high energy levels, additional sensations, ranging from pressure in the chest cavity to actual pain in the ears, are experienced.

Human sense of feeling is also affected by vibrations in building structures, a subject closely related to ordinary building acoustics but outside the scope of this section.
From a strictly mechanical standpoint, the ear responds in a relatively predictable manner to physical changes in sound. Table 11.23 relates the objective characteristics of sound to our subjective responses to those characteristics.
Loudness is the physical response to sound pressure and intensity. It is influenced somewhat by the frequency of the sound.
Pitch is the physical response to frequency. Low frequencies are identified as low in pitch, high frequencies as high in pitch. Middle C on the piano, for example, is 261 Hz; 1 octave below is 130 Hz; 1 octave above is 522 Hz. An octave represents a 2:1 ratio of frequencies.
For practical purposes, humans can be considered to have a hearing range from about 16 Hz to somewhat less than 20,000 Hz. They usually are significantly deaf to low frequencies and very high frequencies. Human loudness response to sounds of identical pressure but varying frequency plots something like the curve in Fig. 11.91. 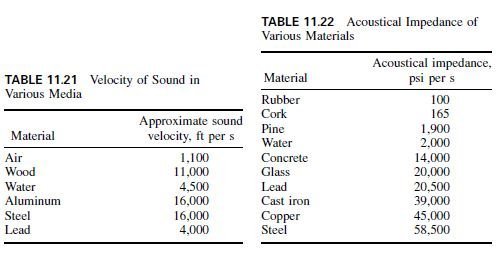 Any measure of loudness must, in some way, specify frequency as well as pressure or intensity to have any real significance in human acoustics. As shown in Art. 11.78, measuring equipment and scales used are all modified to recognize this.

Table 11.24 lists some of the significant frequency ranges.
Sounds generated by mechanical equipment may encompass the entire frequency range of human hearing. Jet aircraft, for example, have significant output throughout the entire range, and large diesel engines produce substantial energy from 30 to 10,000 Hz.

Wanted sound (signal), whatever its nature, communicates information to us.
Unwanted sound, whatever its nature, is noise. When the signal becomes sufficiently louder than the noise, the signal can be detected and the information becomes available. Thus, the distinction between noise and communication is completely subjective, completely a matter of human desires and needs of the moment.
While very weak sounds can be heard in a very quiet background, the level of wanted sound may be increased to override the unwanted background (or noise); but there is a significant noise level above which even loud (shouting) speech is scarcely intelligible. Such a level, if long continued, can prove damaging to the hearing mechanism. At still higher levels, pain can be experienced, and immediate physical damage (often irreversible) may occur.
Complete silence (if such a thing could occur) would be most unpleasant. Humans would quickly become disoriented and distressed. Somewhere between silence and the uncomfortably loud, however, is a wide range that humans find acceptable.