As mentioned in Art. 1.3, construction under the traditional construction procedure is performed by contractors. While they would like to satisfy the owner and the  building designers, contractors have the main objective of making a profit. Hence, their initial task is to prepare a bid price based on an accurate estimate of construction costs. This requires development of a concept for performance of the work and a construction time schedule. After a contract has been awarded, contractors must furnish and pay for all materials, equipment, power, labor, and supervision required for construction. The owner compensates the contractors for construction costs and services.

A general contractor assumes overall responsibility for construction of a building.
The contractor engages subcontractors who take responsibility for the work of the various trades required for construction. For example, a plumbing contractor installs the plumbing, an electrical contractor installs the electrical system, a steel erector structural steel, and an elevator contractor installs elevators. Their contracts are with the general contractor, and they are paid by the general contractor.
Sometimes, in addition to a general contractor, the owners contracts separately with specialty contractors, such as electrical and mechanical contractors, who perform a substantial amount of the work required for a building. Such contractors are called prime contractors. Their work is scheduled and coordinated by the general contractor, but they are paid directly by the owner.
Sometimes also, the owner may use the design-build method and award a contract to an organization for both the design and construction of a building. Such organizations are called design-build contractors. One variation of this type of contract is employed by developers of groups of one-family homes or low-rise apartment buildings. The homebuilder designs and constructs the dwellings, but the design is substantially completed before owners purchase the homes.
Administration of the construction procedure often is difficult. Consequently, some owners seek assistance from an expert, called a professional construction manager, with extensive construction experience, who receives a fee. The construction manager negotiates with general contractors and helps select one to construct the building. Managers usually also supervise selection of subcontractors. During construction, they help control costs, expedite equipment and material deliveries, and keep the work on schedule (see Art. 17.9). In some cases, instead, the owner may prefer to engage a construction program manager, to assist in administrating both design and construction.
Construction contractors employ labor that may or may not be unionized. Unionized craftspeople are members of unions that are organized by construction trades, such as carpenter, plumber, and electrician unions. Union members will perform only the work assigned to their trade. On the job, groups of workers are supervised by crew supervisors, all of whom report to a superintendent.
During construction, all work should be inspected. For this purpose, the owner, often through the architect and consultants, engages inspectors. The field inspectors may be placed under the control of an owner’s representative, who may be titled clerk of the works, architect’s superintendent, engineer’s superintendent, or resident engineer. The inspectors have the responsibility of ensuring that construction meets the requirements of the contract documents and is performed under safe conditions.
Such inspections may be made at frequent intervals.
In addition, inspections also are made by representatives of one or more governmental agencies. They have the responsibility of ensuring that construction meets legal requirements and have little or no concern with detailed conformance with the contract documents. Such legal inspections are made periodically or at the end of certain stages of construction. One agency that will make frequent inspections is the local or state building department, whichever has jurisdiction. The purpose of these inspections is to ensure conformance with the local or state building code.

During construction, standards, regulations, and procedures of the Occupational Safety and Health Administration should be observed. These are given in detail in ‘‘Construction Industry. OSHA Safety and Health Standards (29CFR1926/1910),’’ Government Printing Office, Washington, DC 20402.
Following is a description of the basic traditional construction procedure for a multistory building:
After the award of a construction contract to a general contractor, the owner may ask the contractor to start a portion of the work before signing of the contract by giving the contractor a letter of intent or after signing of the contract by issuing a written notice to proceed. The contractor then obtains construction permits, as required, from governmental agencies, such as the local building, water, sewer, and highway departments.
The general contractor plans and schedules construction operations in detail and mobilizes equipment and personnel for the project. Subcontractors are notified of the contract award and issued letters of intent or awarded subcontracts, then are given, at appropriate times, notices to proceed.
Before construction starts, the general contractor orders a survey to be made of adjacent structures and terrain, both for the record and to become knowledgeable of local conditions. A survey is then made to lay out construction.
Field offices for the contractor are erected on or near the site. If desirable for safety reasons to protect passersby, the contractor erects a fence around the site and an overhead protective cover, called a bridge. Structures required to be removed from the site are demolished and the debris is carted away.
Next, the site is prepared to receive the building. This work may involve grading the top surface to bring it to the proper elevations, excavating to required depths for basement and foundations, and shifting of utility piping. For deep excavations, earth sides are braced and the bottom is drained.
Major construction starts with the placement of foundations, on which the building rests. This is followed by the erection of load-bearing walls and structural framing. Depending on the height of the building, ladders, stairs, or elevators may be installed to enable construction personnel to travel from floor to floor and eventually to the roof. Also, hoists may be installed to lift materials to upper levels. If needed, temporary flooring may be placed for use of personnel.
As the building rises, pipes, ducts, and electric conduit and wiring are installed.
Then, permanent floors, exterior walls, and windows are constructed. At the appropriate time, permanent elevators are installed. If required, fireproofing is placed for steel framing. Next, fixed partitions are built and the roof and its covering, or roofing, are put in place.
Finishing operations follow. These include installation of the following: ceilings;
tile; wallboard; wall paneling; plumbing fixtures; heating furnaces; air-conditioning equipment; heating and cooling devices for rooms; escalators; floor coverings; window glass; movable partitions; doors; finishing hardware; electrical equipment and apparatus, including lighting fixtures, switches, outlets, transformers, and controls;
and other items called for in the drawings and specifications. Field offices, fences, bridges, and other temporary construction must be removed from the site. Utilities, such as gas, electricity, and water, are hooked up to the building. The site is landscaped and paved. Finally, the building interior is painted and cleaned.
The owner’s representatives then give the building a final inspection. If they find that the structure conforms with the contract documents, the owner accepts the project and gives the general contractor final payment on issuance by the building department of a certificate of occupancy, which indicates that the completed building meets building-code requirements.

Fabrication and Placing of Rebars 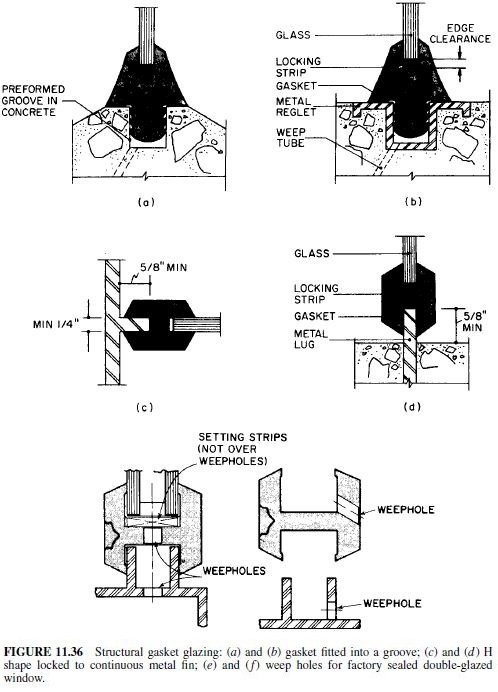