Contractors usually submit bids for a lump-sum contract or a unit-price-type contract, when based on complete plans and specifications.
When plans and specifications have not yet advanced to a stage where a detailed estimate can be made, the type of contract usually resorted to is a cost-plus-fee type. The bid may be based on either a percentage markup the contractor will receive over and above costs, or may include a lump-sum fee that the contractor charges over and above costs. Sometimes an incentive fee is also incorporated, allowing owner and contractor to share, in an agreed-on ratio, the cost savings achieved by the contractor, or to reward the contractor for completing the project ahead of schedule.

Evaluation of bids by an owner may take into consideration the experience and reputation of the contractor, as a result of which awards may not be made on a strictly low-bid basis.
Budget Estimate. Often, an owner in preparing plans and specifications will want to determine the expected construction cost while the plans are still in a preliminary stage. The owner, in that case, will ask contractors for a cost estimate for budget purposes. If the estimate from a specific contractor appears to be satisfactory to an owner, and if the owner is desirous of establishing a contractual relationship with the contractor early in the planning stage so as to benefit from the contractor’s suggestions and guidance, a contract may be entered into after the submission of the estimate. 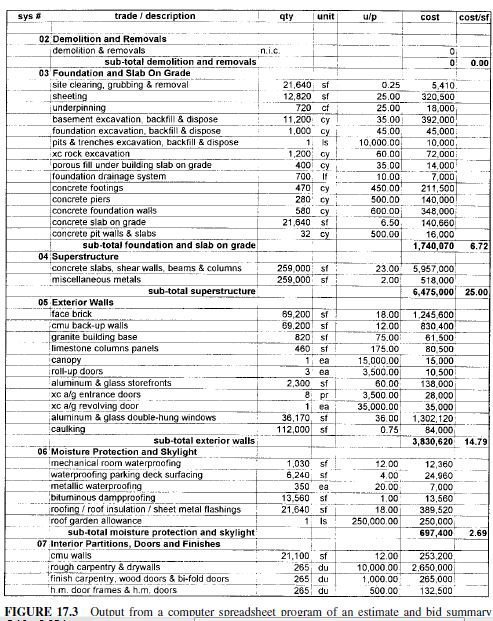 Separate Prime Contracts. Sometimes an owner has the capability for managing construction projects and will take on some of the attributes of a general contractor.
One method for an owner to do this is to negotiate and award separate prime contracts to the various trades required for a project. Administration of these trades will be done either by the owner’s own organization or by a construction manager hired by the owner (Art. 17.9).
Sale Lease-Back. This is a method used by some owners and government agencies to obtain a constructed project. Prospective builders are asked to bid not only on cost of construction, but also on supplying a completed building and leasing it to the prospective user for a specified time. This type of bid requires a knowledge of real estate analysis and financing, as well as construction. Contractors who bid may have to associate with a real estate firm to prepare such a bid.
Developer/Sponsor-Builder. In this type of arrangement (Art. 17.1), the contractor may not only have to prepare a construction-cost estimate but may also need a knowledge of real estate and be prepared to act as owner of the completed project, in accordance with the terms of a sponsor-builder agreement with a government agency, or government-assisted neighborhood or nonprofit group.
The following types of contracts are used for general construction work:
Letter of Intent. This is used where a quick start is necessary and where there is not sufficient time for drafting a more detailed contract. A letter of intent also may be used where an owner wishes material ordered before the general contract is started, or where the commitment of subcontractors requiring extensive lead time must be secured immediately.
Lump-Sum Contract. (For example, Document A-101, American Institute of Architects, 1735 New York Ave., N.W. Washington, D.C. 20006.) Basis of payment is a stipulated sum. Progress payments, however, are made during the course of construction.
Cost-plus-Fixed-Fee Contract. (For example, A-111, American Institute of Architects.)
This type of agreement is used generally with an ‘‘up-set’’ or ‘‘guaranteed maximum’’ price. The contractor guarantees that the total cost plus a fee will not exceed a certain sum. (See types of bids, preceding.) Generally, there are provisions for auditing of the construction costs by the owner.
Cost-plus-Percentage-of-Fee Contract. (For example, A201, American Institute of Architects.) Similar to cost-plus-fixed-fee contracts, but the fee paid, instead of being a lump sum in addition to the cost, is a percentage of the costs.

Unit-Price Contract. This type of agreement is used where the type of work involved is subject to variations in quantities and it is impossible to ascertain the total amount of work when the job is started. Bids will be submitted by the contractors on the basis of estimated quantities for each classification of work involved.
On the basis of the unit prices submitted and the estimated quantities, a low bidder will be chosen for award of the contract. After the contract has been completed, the final amount paid to the contractor will be the sum of the actual quantities encountered for each class of work multiplied by the unit prices bid for that class.
Design-Construction Contracts. This type of agreement is used for turnkey projects and by package builders (Art. 17.1). Cost estimates must be prepared from preliminary plans or from similar past jobs. Preparation of these estimates requires high skill and knowledge of construction methods and costs, because the usual  methods for preparing cost estimates do not apply.
Construction Management Contracts. Under this type of agreement, the construction entity serves as construction manager, acting as an agent of or consultant to the owner, for a fee plus reimbursement of General Conditions items. The construction manager may negotiate an additional fee for extras (Art. 17.9).
Program Management Contracts. This type of agreement contemplates that the program manager will serve as the agent or consultant to the owner or the government agency. Usually the compensation is a fee plus reimbursement of all costs and General Conditions items. The program manager may negotiate an additional fee for additional services that may be requested by the owner.