The VAV concept as applied to air conditioning is based on the idea of varying the supply-air volume, with constant temperature, to meet changing load conditions of interior spaces or zones (Fig. 13.38). Many installations utilize packaged roof units,
although large or small built-up units may also be used.
Rooftop units may be used for the following VAV applications:
1. Interior VAV cooling and perimeter radiation
2. Interior VAV cooling and constant-volume perimeter heating

Zoning is very important in the design stage and will contribute greatly to the success or failure of the HVAC system. An insufficient number of zones will lead to loss of temperature control in areas that do not have the controlling thermostat.
The more zones utilized, the better will be the comfort conditions attained, but with some increase in initial costs.

All types of diffusers (registers) may be used with VAV control units. Standard diffusers with reduced air-flow rates, however, often cause ‘‘dumping’’ of discharge air directly downward with wide variations in space temperature. Many authorities recommend linear-slot-type diffusers to negate dumping. Such diffusers discharge air into the room with a horizontal flow that hugs the ceiling. This is called the coanda characteristic effect and is very effective in distributing supply air throughout a room.

For producing variable volume other than by modulation of the supply fan, terminal control units of many types may be used:
Shut-off control diffusers are used for interior cooling. They are available with many features, such as shut-off operation, multiple slots, integral slot diffuser, electric-pneumatic or system-powered controls. They are available in 200- to 800-cfm capacities, with choice of aspirating, unit-mounted pneumatic, system powered or electric thermostats. Savings are attributable to modulations of supplyair fans, which also provide complete control flexibility with reduced control costs.
These diffusers are easy to install and are compatible with most ceiling systems.
Fan-powered control units are generally used for perimeter and special-use areas. They feature VAV operation in the cooling mode. They are available with pressure-compensating controls with factory-installed hot-water or multistage electric coils that have pneumatic or electric controls. A built-in, side-mounted fan recirculates plenum air. Fan-powered units permit maximum modulation of the central fan as the control unit modulates to full shut-off VAV position. A terminal fan in the control unit is operated to maintain minimum flow in perimeter zones only.
Heat generated by lighting fixtures is also used to assist in heating of the perimeter zones. Additional or supplemental heat is provided by unit-mounted hot-water or electric coils. No reheating of conditioned air is utilized.

These assemblies consist of the dual-duct VAV control unit and linear-slot diffusers (Fig. 13.39). They are used for VAV dual-duct perimeters and special-use areas.
They provide all the features and benefits described previously.

Linear-slot diffusers are available  for all VAV systems. These diffusers maintain the desired coanda effect down to 5% of air flow. They are available with one- or two-way throws, with up to four slots at 1000 cfm per diffuser.
They may operate with aspirating electric, pneumatic or system-powered, unitmounted thermostats. Factory-installed fire dampers are also available. Benefits include elimination of dumping at reduced flows, ease of relocation, and high capacity at low first cost, as well as reduced control costs with unitmounted  thermostats. 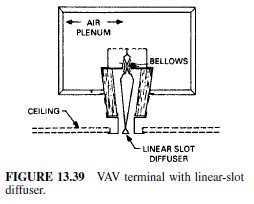 Rooftop packaged units used for VAV air conditioning may transmit high levels of noise to occupied spaces. Such noise is generally caused by compressor, condenser fans, or supply-duct exhaust fans. Computerized duct-design programs are available that indicate the sound generation that can be expected at any point in the duct distribution system. Examination of the predicted levels gives designers the opportunity to make design alterations to avoid adverse acoustical conditions.
Location of rooftop units is also important. They should not be installed over offices, conference rooms, or other critical areas. Units preferably should be located over storage rooms, corridors, or utility areas, where higher sound levels would be acceptable.
(H. E. Bovay, Jr., ‘‘Handbook of Mechanical and Electrical Systems for Buildings,’’ N. R. Grimm and R. C. Rosaler, ‘‘Handbook of HVAC Design,’’ McGraw- Hill Publishing Company, New York; B. Stein et al., ‘‘Mechanical and Electrical Equipment for Buildings,’’ John Wiley & Sons, Inc., New York.)