Webs of rolled beams and plate girders should be so proportioned that the compressive stress, ksi, at the web toe of the fillets does not exceed

where Fy = specified minimum yield stress, ksi.
Web failure probably would be in the form of buckling caused by concentrated loading, either at an interior load or at the supports. The capacity of the web to transmit the forces safely should be checked.

Load Distribution. Loads are resisted not only by the part of the web directly under them but also by the parts immediately adjacent. A 45 distribution usually is assumed, as indicated in Fig. 7.35 for two common conditions. The distance k is determined by the point where the fillet of the flange joins the web; it is tabulated in the beam tables of the AISC ‘‘Manual of Steel Construction.’’
Fa is applicable to the horizontal web strip of length b  k at the end support or b  2k under an interior load.
Bearing stiffeners are required when Fa is exceeded.
Bearing atop Webs. The sum of the compression stresses resulting from loads bearing directly on or through a flange on the compression edge of a plate-girder web should not exceed the following:
When the flange is restrained against rotation, the allowable compressive stress, ksi, is

where a  clear distance between transverse stiffeners, in
h  clear distance between flanges, in
t  web thickness, in
The load may be considered distributed over a web length equal to the panel length (distance between vertical stiffeners) or girder depth, whichever is less.
Web Stiffeners on Columns. The web of a column may also be subject to crippling by the thrust from the compression flange of a rigidly connected beam, as shown at point a in Fig. 7.36. Likewise, to ensure full development of the beam plastic moment, the column flange opposite the tensile thrust at point b may require stiffening.
When stiffeners having a combined cross-sectional area Ast, in^2, are required on the column whenever Ast computed from Eq. (7.48) is positive 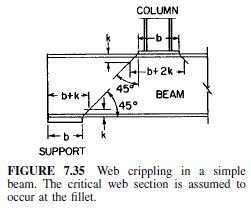 Regardless of the preceding requirement, a single or double stiffener is needed opposite the compression force delivered to the column at point a when 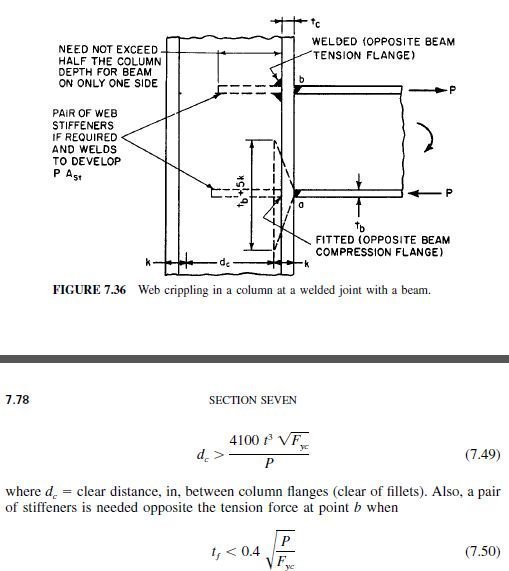 Six limit states should be considered at locations where a large concentrated force acting on a member introduces high local stresses. These limit states are local flange bending, local web yielding, web crippling, sidesway web buckling, compression buckling of the web, and high shear in column web panels. Detailed requirements for determining the design strength for each of these limit states are contained in the AISC LRFD ‘‘Specification for Structural Steel for Buildings.’’
When web stiffeners are required to prevent web crippling or compression buckling of the web, they are designed as columns with an effective length of Kl  0.75h, where h is the clear distance between flanges. The effective cross section is the area of the stiffeners plus 25t for interior stiffeners for 12t for stiffeners at the end of a member, where t is the web thickness.