This is the predominant method for building single- and multifamily dwellings.
Wood-frame buildings can be erected speedily and are economical to build. For  wood framing, the walls are conventionally built with studs spaced 16 or 24 in c to c. Similarly, joists and rafters, which are supported on the walls and partitions, are also usually spaced 16 or 24 in c to c. Facings, such as panel sheathing, wallboard, decking, floor underlayment, and roof sheathing, are generally available in appropriate sizes for attachment to studs, joists, and rafters with these spacings.

Wood studs are usually set in walls and partitions with wide faces perpendicular to the face of the wall or partition. The studs are nailed at the bottom to bear on a horizontal member, called the bottom or sole plate. At the top, they are nailed to a pair of horizontal members, called the top plate. These plates often are the same size as the studs. Joists or rafters may be supported on the top plate or on a header.
Studs are braced against racking by diagonal or horizontal blocking and facing materials, such as structural wood panels or in some instances by gypsum sheathing.
Two types of wood-frame construction are generally used: platform frame and plank-and-beam frame.

In this type of construction, first-floor joists are completely covered with subflooring to form a platform on which exterior walls and interior partitions are built (Fig. 10.23). This is the type of framing usually used for single-family dwellings. (See  ‘‘Manual for Wood Frame Construction,’’ WCD #1, American Forest & Paper Association, Washington, D.C.)

In contrast to conventional framing, which utilizes joists, rafters, and studs spaced 12 to 24 in c to c, plank-and-beam frames require fewer but larger-size piers, and wood components are spaced farther apart (Fig. 10.24). In plank-and-beam framing, subfloors or roofs, typically composed of members with a nominal thickness of 2 in, are supported on beams spaced 8 ft c to c. Ends of the beams are supported on posts or concrete piers. Supplemental framing is used between posts for attachment of exterior and interior wall framing and finishes. It also provides lateral support or bracing for the structure.
Plank-and-beam framing has several cost-saving aesthetic advantages:
• Distinctive architectural effect provided by the exposed wood deck ceiling. In many cases, no further ceiling treatment is needed, except perhaps application of a sealer, stain, or paint.
• If well-planned, construction labor savings can be achieved. Larger and fewer framing members requires less handling and fewer mechanical fasteners.
• Elimination of cross bracing, which is often required in platform and balloon framing.
(See ‘‘Plank and Beam Framing for Residential Buildings,’’ WCD No. 4, American Forest & Paper Association, Washington, D.C.) 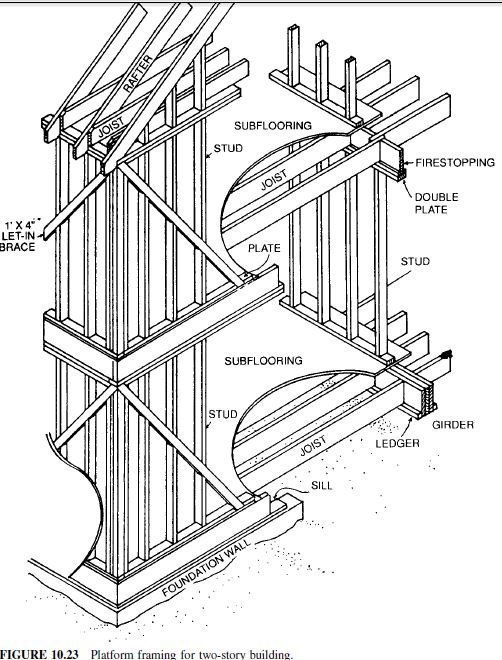 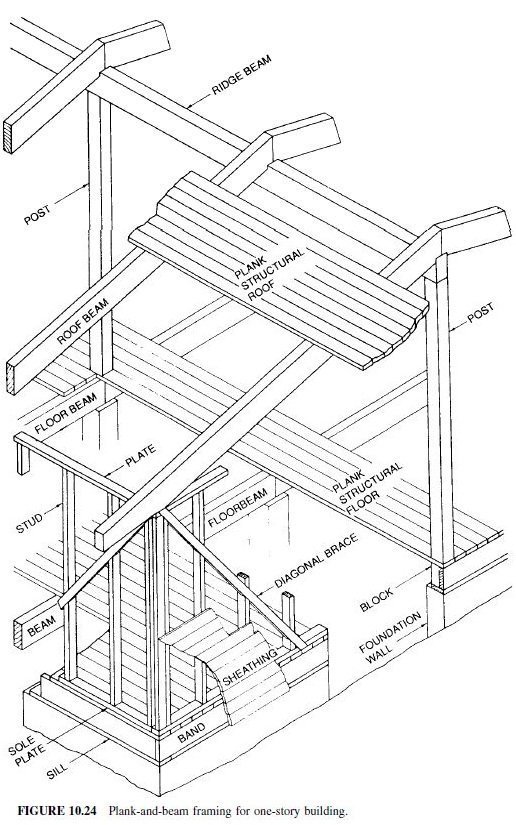