Like building codes, zoning codes are established under the police powers of the state, to protect the health, welfare, and safety of the public. Zoning, however, primarily regulates land use by controlling types of occupancy of buildings, building height, and density and activity of population in specific parts of a jurisdiction.
Zoning codes are usually developed by a planning commission and administered by the commission or a building department. Land-use controls adopted by the local planning commission for current application are indicated on a zoning map.
It divides the jurisdiction into districts, shows the type of occupancy, such as commercial, industrial, or residential, permitted in each district, and notes limitations on building height and bulk and on population density in each district.
The planning commission usually also prepares a master plan as a guide to the growth of the jurisdiction. A future land-use plan is an important part of the master plan. The commission’s objective is to steer changes in the zoning map in the direction of the future land-use plan. The commission, however, is not required to adhere rigidly to the plans for the future. As conditions warrant, the commission may grant variances from any of the regulations.
In addition, the planning commission may establish land subdivision regulations, to control development of large parcels of land. While the local zoning map specifies minimum lot area for a building and minimum frontage a lot may have along a street, subdivision regulations, in contrast, specify the level of improvements to be installed in new land-development projects. These regulations contain criteria for location, grade, width, and type of pavement of streets, length of blocks, open spaces to be provided, and right of way for utilities.
A jurisdiction may also be divided into fire zones in accordance with population density and probable degree of danger from fire. The fire-zone map indicates the limitations on types of construction that the zoning map would otherwise permit.
In the vicinity of airports, zoning may be applied to maintain obstruction-free approach zones for aircraft and to provide noise-attenuating distances around the airports. Airport zoning limits building heights in accordance with distance from the airport.
Control of Building Height. Zoning places limitations on building dimensions to limit population density and to protect the rights of occupants of existing buildings to light, air, and esthetic surroundings. Various zoning ordinances achieve these objectives in a variety of ways, including establishment of a specific maximum height or number of stories, limitation of height in accordance with street width, setting minimums for distances of buildings from lot lines, or relating total floor area in a building to the lot area or to the area of the lot occupied by a building.
Applications of some of these limitations are illustrated in Fig. 1.11.
Figure 1.11a shows a case where zoning prohibits buildings from exceeding 12 stories or 150 ft in height. Figure 1.11b illustrates a case where zoning relates building height to street width. In this case, for the specific street width, zoning permits a building to be erected along the lot boundary to a height of six stories or 85 ft. Greater heights are permitted, however, so long as the building does not penetrate sky-exposure planes. For the case shown in Fig. 1.11b, these planes start at the lot line at the 85-ft height and incline inward at a slope of 3:1. Some zoning codes will permit the upper part of the building to penetrate the planes if the floor area of the tower at any level does not exceed 40% of the lot area and the ratio of floor area to lot area (floor-area ratio) of the whole building does not exceed 15.
To maximize the floor area in the building and maintain verticality of exterior walls, designers usually set back the upper parts of a building in a series of steps (Fig. 1.11b).
Some zoning ordinances, however, permit an alternative that many designers prefer. If the building is set back from the lot lines at the base to provide a streetlevel plaza, which is a convenience to the public and reduces building bulk, zoning permits the building to be erected as a sheer tower (Fig. 1.11c). The code may set a maximum floor-area ratio of 15 or 18, depending on whether the floor area at any level of the tower does not exceed 50 or 40%, respectively, of the lot area. 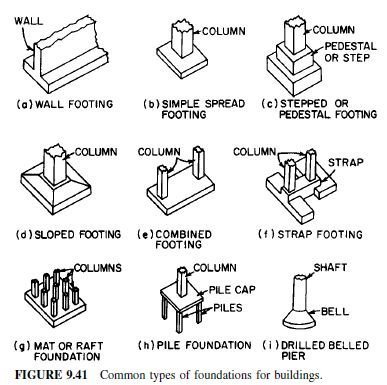