The presence of profiled steel sheeting in a slab is normally ignored when the slab is considered as
part of the top flange of a composite beam. Longitudinal shear in the slab (explained in Section 1.6)
causes shear strain in its plane, with the result that vertical cross sections through the compo-sited
T-beam do not remain plane, when it is loaded. At a cross-section, the mean longitudinal bending
stress through the thickness of the slab varies as sketched in Fig.3.13. 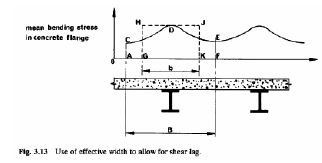 For beams in buildings, it is usually accurate enough to assume that the effective width is lo/8 on each side of the steel web, where lo is the distance between points of zero bending moment. For a simply-supported beam, this is equal to the span, L, so that

provided that a width of slab L/8 is present on each side of the web.
Where profiled sheeting spans at right angles to the span of the beam (as in the worked example here), only the concrete above its ribs can resist longitudinal compression (e.g. its effective thickness in Fig.3.9 is80 mm). Where ribs run parallel to the span of the beam, the concrete within ribs can be included, though it is rarely necessary to do so.
Longitudinal reinforcement within the slab is usually neglected in regions of sagging bending.