In studying the simple composite beam with full interaction (Section 2.2.2), it was assumed that slip was everywhere zero However, the results of push tests show(e.g Fig.2.10) that even at the smallest loads, sip is not zero. It is therefore necessary to Know bow the behavior of a beam is modified by the presence of silp .This is best illustrated by an analysis based on elastic theory It leads to a differential equation that has to be solved afresh for each type of loading. And is therefore too complex for use in design office Even so ,Partial-interaction of simpler methods for predicting the behaviour of beams at working load and finds application in the calculation of interface shear forces due to shrinkage and differential thermal expansion.
The problem to be studied and the relevant variables are defined below. The details of the theory and of its application to a composite beam, are give in Appendix A the results and comments on them are given below and in section 2.7.
Elastic analysis is relevant to situations in which the loads on connectors do not exceed about half their ultimate strength. The relevant part OB of the load –slip curve (Fig.2.10)can be replaced with little error by the straight line The ratio of load to slip given by this line is known as the connector modulus,k.

For simplicity the scope of the analysis is restricted to a simply supported composite beam of
span L(Fig.2.15)carrying a distributed load w perunit length. The cross-section consists of a
concrete slab of thickness hc cross-sectional area Ac. And second moment of are Ic, and a
symmetrical steel section with corresponding properties hs , Aa , and Ia The distance between the
centroids of the concrete and steel cross-sections, dc, is given by

Shear connectors of modulus k are provided at uniform spacing P along the length of the beam.
The elastic modulus of the steel is Ea, and that of the concrete for short-term loading is Ee
Allowance is made for creep of concrete by using an effective modulus Ec in the analysis, where

and ke is a reduction coefficient, calculated from the ratio if creep strain to elastic strain. The
modular ratio n is defined by

The concrete is assumed to be as stiff in tension as in compression, for it is found that tensile  stresses in concrete are low enough for little error to result in this analysis, except when the degree of shear connection is very low.
The results of the analysis are expressed in terms of two functions of the cross-section of the member and the stiffness of its shear connection, a and B These are defined by the following equations, in which notation established in CP 1177:Part(26)has been used.

In a composite beam, the section is thinner than the concrete section, and the steel has the steel has a much higher coefficient of thermal conductivity. Thus the steel responds more rapidly than the concrete to changes of temperature, if the two components were free, their lengths would change at different rates; but the shear connection prevents this, and the resulting stresses in both materials can be large enough to influence design. The shrinkage of the concrete slab has a similar effect. A simple way of allowing for such differential strains in this analysis is to assume that after connection to the steel, the concrete slab shortens uniformly, by an amount Ee per unit length, relative to the steel.
It is shown in Appendix A that the governing equation relating slip s to distance along the beam from midspan, x, Is

Expressions for the slip strain and the stresses throughout the beam can be obtained from this result. The stresses at a cross-section are found to depend on the loading, boundary conditions and shear connection for the whole beam. They cannot be calculated from the bending moment and shear force at the section considered. This is the main reason why design methods simple enough for use in practice have to be based on full-interaction theory.

Effect of slip on stresses and deflections 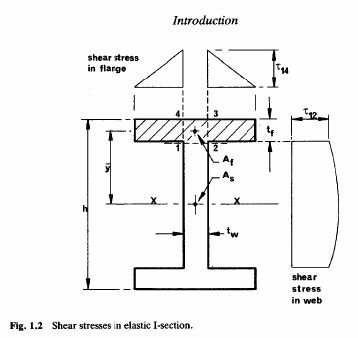 Methods of analysis and design