The ViscoCorder is a single-point device used in Germany to measure the consistency of fresh mortar. Banfill (1990) modified the test to measure both the yield stress and plastic viscosity of mortar.

The device consists of a metal cylinder mounted on a rotating turntable. A paddle inserted in the cylinder is connected to a calibrated spring that measures the torque on the paddle. As the cylinder is rotated, the mortar applies a torque to the paddle. Traditionally, the device was operated at only one rotation speed. Banfill (1990) modified the device to measure torque at multiple rotation speeds. To obtain a plot of torque versus speed, the speed of the cylinder is changed in steps from zero to a maximum speed and back to zero. Unlike other rheometers, the device is not automated to change rotation speed and continuously record torque versus time. The device can be calibrated to correlate values for torque and speed to yield stress and plastic viscosity.

Banfill (1990) found that the ViscoCorder works well for fluid mortars; however, stiff mortars slip on the wall of the container, resulting in torque readings that are not an accurate representation of rheology. The container does not include any protrusions to prevent slip. 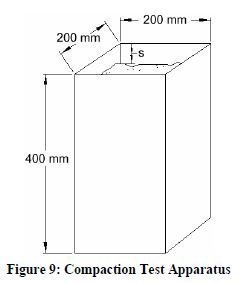