The flow table test (Tattersall 1991; Bartos 1992; Wong et al. 2000; Bartos, Sonebi, and Tamimi 2002) measures the horizontal spread of a concrete cone specimen after being subjected to jolting. Multiple versions of the test have been proposed since its original introduction in Germany in the 1930s. The test was added to the British Standards in 1983 in response to the increase use of highly fluid concretes. The test is sometime referred to as the DIN flow table, in reference to its inclusion in German standard DIN 1048. The test is currently standardized in the Europe as EN 12350-5.
The apparatus consists of a 700 mm square wooden top plate lined with a thin metal sheet, as shown in Figure 12. The plate is hinged on one end to a base, while on the other end, clips allow the plate to be lifted a vertical distance of 40 mm. Etched into the metal sheet are two perpendicular lines that cross in the center of the plate and a 200 mm circle concentric with the center of the plate. The frustum of a cone used to mold the concrete is shorter than the slump cone, with a top diameter of 130 mm and with a bottom diameter and height of 200 mm. 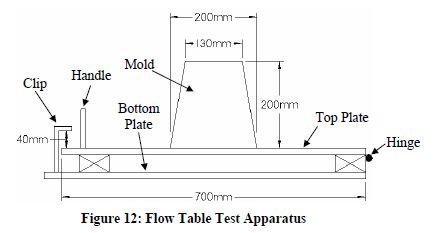 To perform the test, the cone mold is placed in the center of the plate and filled in two layers, each of which is compacted with a tamping rod. The plate is lifted with the attached handle a distance of 40 mm and then dropped a total of 15 times. The horizontal spread of the concrete is measured. Resistance to segregation can be assessed qualitatively: in concrete mixes that are susceptible to segregation, the paste will tend separate from the coarse aggregate around the perimeter of the concrete mass.
The test is applicable to a wide range of concrete workability, and is especially appropriate for highly fluid mixes that exhibit a collapsed slump. The results of the test can be correlated to slump, although it has been suggested that the initial horizontal spread, prior to jolting, correlates better to slump (Juvas 1994). Despite its simplicity, the test apparatus is large and must be placed on firm, level ground. The jolting of the concrete does not accurately simulate field practices and cannot easily be treated analytically. In fact, the further the concrete spreads, the thinner the layer of concrete becomes and the less this thin layer represents the bulk properties of the concrete. Research has suggested that spread measurements for different concrete mixtures converge with an increasing number of drops of the top plate (Tattersall 1991).
Advantages:
• The test is simple and can be used in the field.
• The test quickly provides a direct result.
• The test is dynamic, making it especially appropriate for highly thixotropic concrete mixtures.
Disadvantages:
• The test procedure does not represent actual placement conditions—concrete is typically vibrated, not jolted.
• The test results tend to converge as the number of drops is increased. Near the end of the test, the properties of the thin layer of concrete do reflect the bulk properties of the concrete.
• The results are not given in terms of fundamental units. An analytical treatment of the test would be difficult.