The intensive compaction test (Juvas 1990; Tattersall 1991; Juvas 1994; US patent 4,794,799; US patent 4,930,346) is a gyratory compactor used to measure the workability of concrete mixtures with slumps less than approximately 1 cm. The test device—which is used for quality control, mix proportioning, and research—has been standardized in Nordtest-Build 427, ISSN 0283-7153.

The test apparatus is a machine that applies compression and shear forces to a concrete specimen while recording the density of the specimen. To perform the test, the concrete to be tested is placed in a cylindrical mold, which is loaded into the test apparatus. The mold is available in two diameters—a 100 mm diameter mold is used for concretes with maximum aggregate sizes of up to 20 mm while a 150 mm diameter mold is appropriate for maximum aggregate sizes up to 32 mm. Two pistons at either end of the cylinder apply a compressive force to the sample. Simultaneously, the angle of inclination of the pistons rotates to apply a shearing motion to the concrete. This compaction technique is represented in Figure 21. The pressure and speed of rotation can be adjusted for each test; however, these variables are held constant during each test. The volume of the sample, which is used to calculate density, is recorded continuously throughout the test. The test is performed in 3-5 minutes.

After the test, the sample of concrete can be removed from the cylinder mold and tested for compressive or splitting tensile strength either in the concrete’s fresh or hardened state. The results of the intensive compaction test show good correlation to the results of the Kango hammer test and the Proctor test.

Although the larger 150 mm diameter model is too heavy and bulky for field use, the lightweight version of the 100 mm diameter model weighs approximately 120 lbs and can be transported to a field site. Electricity and compressed air are required to perform the test.

Advantages:
• Research has shown that the test is capable of accurately measuring even small changes in mixture proportions.
• The test accurately simulates placement conditions for low slump roller-compacted concretes.
• The test is fast and computer controlled.
• The test can be used for research, mix proportioning, or quality control. The smaller 100 mm model is feasible for field use.
Disadvantages:
• The equipment is expensive, especially when compared to the proctor test. The 150 mm diameter model is too heavy for field use.
• The test does not incorporate vibration, which is commonly used in the placement of low slump concrete. 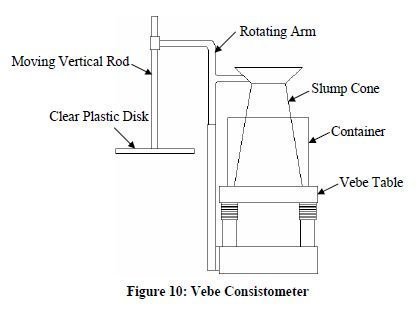