The Kango hammer test (Juvas 1994; Bartos, Sonebi, and Tamimi 2002) attempts to measure workability by simulating the effect of vibration and pressing on low-slump concretes. The test is based on British standards BS1924:1975, “Methods of test for stabilized soils,” and BS 1377:1975, “Vibrating hammer method”. Concrete is placed in a cubic or cylinder mold in two to three separate layers. A demolition hammer, which is mounted in a frame and equipped with a special bit that fits the shape of the mold, applies a constant pressure and vibration to each layer of concrete. After compaction of all layers, the density of the concrete specimen is determined. The greater the density of the compacted concrete specimen, the greater will be the compactability and workability of the concrete mix.

The particular demolition hammer typically used for this test method is manufactured by Kango Tools of Winnenden, Germany. Bartos, Sonebi, and Tamimi (2002) recommend using a model 900 or 950.

Advantages:
• By using both vibration and pressure, the test accurately simulates field placement conditions.
• The test is simple and easy to perform.
Disadvantages:
• The particular hammer is not specified, making comparisons of the test results difficult.
• The apparatus is larger than the proctor test and requires electricity. 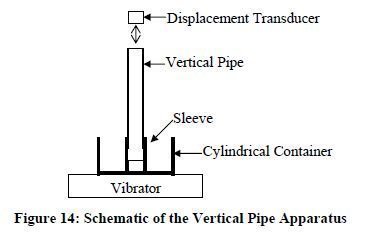