The Kelly ball test (Powers 1968; Bartos 1992; Scanlon 1994; Ferraris 1999; Bartos, Sonebi, and Tamimi 2002) was developed in the 1950s in the United States as a fast alternative to the slump test. The simple and inexpensive test can be quickly performed on in-place concrete and the results can be correlated to slump.
The test apparatus consists of a 6 inch diameter, 30 pound ball attached to a stem, as shown in Figure 6. The stem, which is graduated in ¼ inch increments, slides through a frame that rests on the fresh concrete. To perform the test, the concrete to be tested is stuck off level. The ball is released and the depth of penetration is measured to the nearest ¼ inch. At least three measurements must be made for each sample.The Kelly ball test provides an indication of yield stress, as the test essentially measures whether
the stress applied by the weight of the ball is greater than the yield stress of the concrete (Ferraris 1999). For a given concrete mixture, the results of the Kelly ball test can be correlated to slump.
Equations based on empirical testing have been published for use on specific types of concrete mixtures (Powers 1968). Typically, the value of slump is 1.10 to 2.00 times the Kelly ball test reading. It has been claimed that the Kelly ball test is more accurate in determining consistency than the slump test (Scanlon 1994).
The Kelly ball test was formerly standardized in ASTM C360-92: “Standard Test Method for Ball Penetration in Freshly Mixed Hydraulic Cement Concrete.” The ASTM standard was discontinued in 1999 due to lack of use. The test has never been used widely outside the United States (Bartos 1992).
The test is applicable to a similar range of concrete consistencies as the slump test and is applicable to special mixes, such as lightweight and heavyweight concretes. The precision of the test declines with the increasing size of coarse aggregate (Bartos 1992).
Advantages:
• The test is faster than the slump test and can be preformed on in-place concrete to obtain a direct result quickly.
• It has been claimed that the Kelly ball test provides more accurate results than the slump test.
Disadvantages:
• Like the slump test, the Kelly ball test is a static test.
• The test must be performed on a level concrete surface.
• The test is no longer widely used.
• Large aggregate can influence the results. 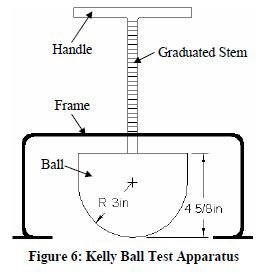 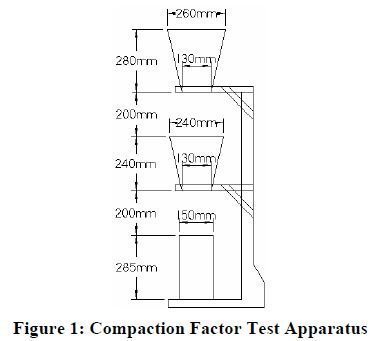