The settlement column segregation test (Bartos, Sonebi, and Tamimi 2002) measures the degree of segregation that occurs in a concrete subjected to a standard settlement period and a standard amount of jolting. The test method is primarily intended for highly fluid concrete mixtures.

The test apparatus consists of a tall, rectangular box mounted on top of a standard mortar drop table. The column, depicted in Figure 16, is 500 mm tall and has cross sectional dimensions of 100 mm by 150 mm. Three doors on opposing sides of the box allow sections of concrete to be removed at the conclusion of the test. To begin the test, concrete is placed in the column and allowed to stand for one minute. The concrete is subsequently jolted 20 times in one minute using the drop table and then allowed to stand for an additional five minutes. The top door is then opened and the concrete behind the door is removed and saved. The concrete behind the middle door is discarded while the concrete behind the bottom door is saved. The samples from the top and the bottom of the column are individually washed through a 5 mm sieve to leave only the coarse aggregate. The segregation ratio is then calculated as ratio of the mass of coarse aggregate in the top sample to the mass of coarse aggregate in the bottom sample. The lower this ratio is, the greater the susceptibility to segregation will be.

Advantages:
• The test attempts to simulate actual placement conditions.
• The test method is simple and does not require expensive equipment.
Disadvantages:
• The test is time consuming and is not practical for use in the field.
• The repeatability of test results decreases as segregation increases. 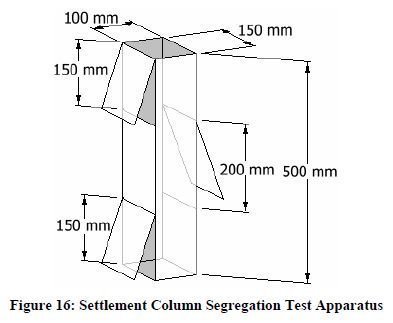