The V-funnel test (EFNARC 2002; Bartos, Sonebi, and Tamimi 2002) is used to measure the filling ability of self-compacting concrete and can also be used to judge segregation resistance. The test method is similar to the concept of the flow cone test used for cement paste.

The test apparatus, shown in Figure 24 consists of a V-shaped funnel with a height of 425 mm, a top width of 490 mm, a bottom width of 65 mm, and a thickness of 75 mm. At the bottom of the V-shape, a rectangular section extends downward 150 mm. Alternatively, an O-shaped funnel with circular cross section can be used. The entire funnel is filled with concrete without tamping or vibration. The door at the bottom of the funnel is opened and concrete is allowed to flow out of the funnel and into a bucket. The flow time for all of the concrete to exit the funnel is recoded as a measure of filling ability. For self-compacting concrete, the flow time should be less than 10 seconds. To measure segregation resistance, the V-funnel is refilled with concrete and allowed to sit for 5 minutes. The door is again opened and the flow time is recorded. The greater the increase in flow time after the concrete has remained at rest for five minutes, the greater will be the concrete’s susceptibility to segregation. Further, non-uniform flow of concrete from the funnel suggests a lack of segregation resistance. 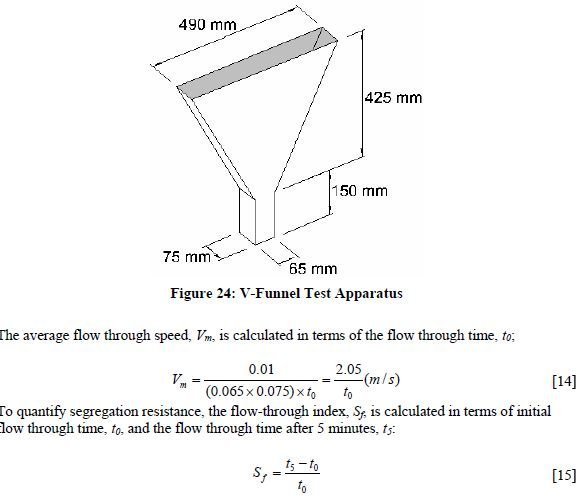