The Wuerpel device (Maultzsch 1990) measures the consistency of mortars by applying a shear force to a mortar specimen and measuring deformation energy.

The apparatus consists of a quadratic mold with side lengths of 100 mm and a height of 50 mm. The corners of the mold are hinged to allow the mold, which is filled with compacted mortar, to deform from a square shape to a rhombus shape. The operation of the device is depicted conceptually in Figure 31. A load cell and a displacement transducer continuously measure the deformation force and the displacement of the mold, respectively. The area under the resulting  force-displacement curve represents the deformation energy, which is used to characterize workability.

The test method was developed in Germany and was briefly included in German standards in the late 1960s. Maultzsch (1990) used the test to measure the change in workability with time for mortars with a maximum aggregate size of 4 mm and found that the test device works particularly well for stiff mortars, although it is applicable to a wide range of concrete workability. The results of the test are dependant on the deformation speed of the device. 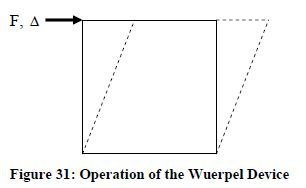