Saddles atop towers of suspension bridges may be large steel castings in one piece (Fig. 15.35) or, to reduce weight, partly of weldment (Fig. 15.36). The size of the saddle may be determined by the permissible lateral pressures on the cables, which are a function of the radius of curvature of the saddle. Other saddles of special design may be required at side piers to deflect the anchor-span cables to the anchorages. Also, splay saddles may be needed at the anchorages.

In cable-stayed bridges, where the cable stays converge to the top of a pylon (radiating configuration) and are continuous over the pylon, massive saddles, similar to those for suspension-bridge towers, are used. For the types of cable-stay configurations where the stays are distributed along a cellular-type pylon, similar (but smaller) saddles may be used at the pylon. If the pylon is solid concrete, the saddles are generally steel pipe, bent to the appropriate degree of curvature and embedded in the concrete.
Suspension-bridge anchorages for the main cables are usually massive concrete blocks designed to resist, with mass and friction, the overturning and sliding effects of the maincable pull. (Where local conditions permit, as with the Forth Road Bridge, the cables may be anchored in tunnels in rock.) The anchorages contain embedded steel eyebar chains to which the main wire cables are connected. A typical arrangement, as used for the Verrazano Narrows Bridge is shown in Fig. 15.37. A saddle is installed where the strands diverge to attach to the eyebars. Strand wires loop over a strand shoe and are attached to an eyebar (Fig. 15.33—see discussion of spinning in Art. 15.23).
A slightly different concept was used for the Newport Bridge (Fig. 15.38). In this case, the prefabricated strands of the main cable diverge and pass through 78 pipes held in position by a structural steel framework and transfer their loads to the anchorage through a bearingtype anchorage socket. The whole supporting framework is eventually encased in concrete.
In this anchorage-block arrangement, the strand sockets bear on the back of the anchorage block instead of connecting with a tension linkage at the front of the block.
In suspension bridges, the suspender cables are attached to the main cables by cable bands. These are usually made of paired, semicylindrical steel castings with clamping bolts. 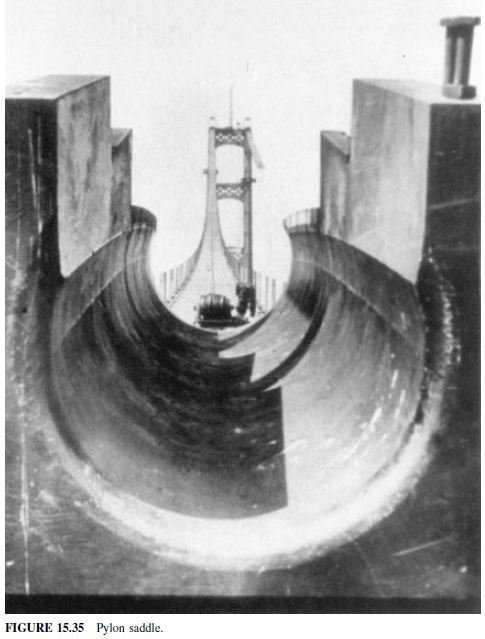 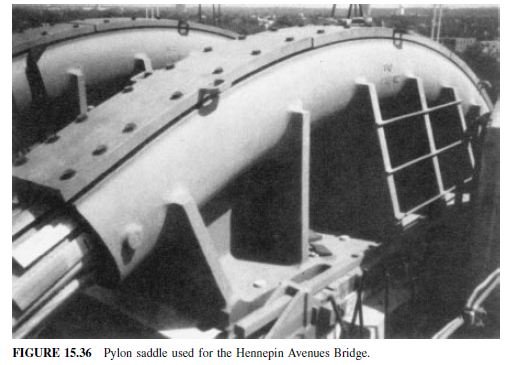 The end fittings or sockets of structural strand or rope are standardized by manufacturers and may be swaged or zinc-poured. These fittings include open or closed sockets of dropforged or cast steel. Some are illustrated in Fig. 15.41. Fatigue must be considered in designing bridge cables that depend on zinc-poured socketing, particularly if they are subject to a wide range of stress.
The attachments of suspenders to girders depend on the type of girder detail. Generally, the end fitting of a suspender is a swaged or zinc-poured type. Where there are multiple strands or ropes in a suspender, the fitting may be specially made. 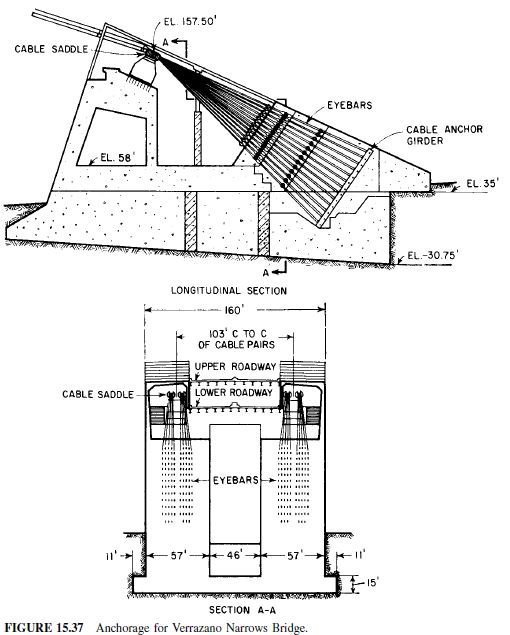 Early cable-stayed bridges had stays consisting of parallel structural strands or lockedcoil strands. These strands had conventional zinc-poured sockets. Because of concern with the low fatigue strength of structural strand with zinc-poured sockets, a new type of socket, called a HiAm (high amplitude) socket, was developed in 1968 by Prof. Fritz Leonhardt in conjunction with Bureau BBR Ltd., Zurich. It was intended for use with stays consisting of parallel 1⁄4-in-dia. prestressing wires that terminate with button heads (ASTM A421 Type BA) in an anchor plate in the socket. The anchor socket is filled with steel balls and an epoxy-and-zinc dust binder. This type of anchorage increases the fatigue resistance to about twice that for zinc-poured sockets. The HiAm sockets were used in the United States for the Pasco-Kennewick, Luling, and East Huntington cable-stayed bridges. After those bridges were constructed, seven-wire prestressing strand came into general use, and several types of anchorages were developed to accommodate parallel prestressing strands in cable stays. 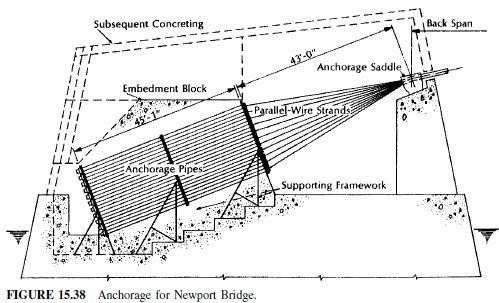