In the design of flexural members consideration must be given to bending strength, shear strength, and web crippling, as well as combinations thereof, as discussed in subsequent articles. Bending strength must consider both yielding and lateral stability. In some applications, deflections are also an important consideration.

Nominal Strength Based on Initiation of Yielding

For a fully braced member, the nominal strength, Mn, is the effective yield moment based
on section strength:

Nominal Strength Based on Lateral Buckling

For this condition, the nominal strength, Mn, of laterally unbraced segments of singly-, doubly-, and point-symmetric sections is given by Eq. 10.25. These provisions apply to I-, Z-, C-, and other singly-symmetric sections, but not to multiple-web decks, U- and box sections.
Also, beams with one flange fastened to deck, sheathing, or standing seam roof systems are treated separately. The nominal strength is 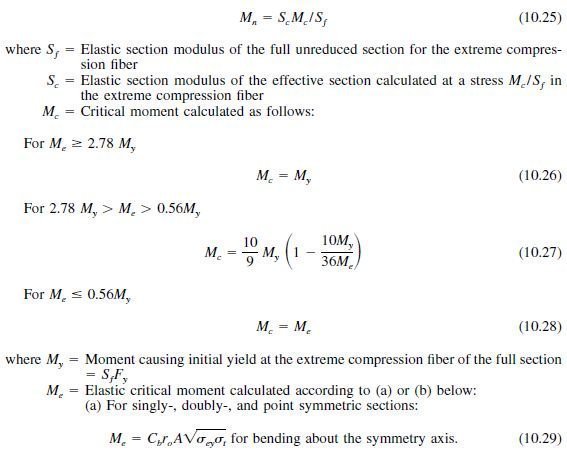 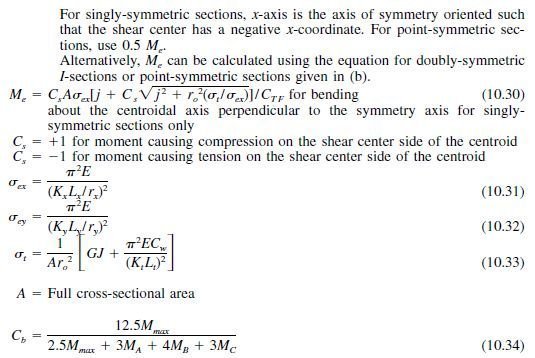 where
M1 is the smaller and M2 the larger bending moment at the ends of the unbraced length in the plane of bending, and where M1 /M2, the ratio of end moments, is positive when M1 and M2 have the same sign (reverse curvature bending) and negative when they are of opposite sign (single curvature bending).
When the bending moment at any point within an unbraced length is larger than that at both ends of this length, and for members subject to combined compressive axial load and bending moment (Art. 10.15), CTF = 1.0. 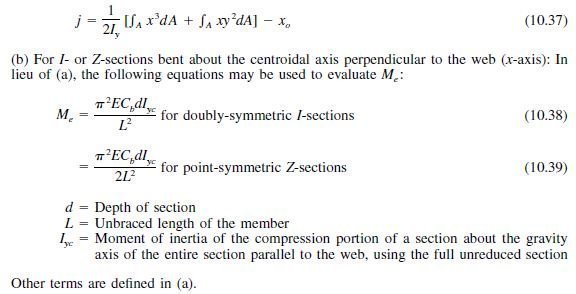 If the tension flange of a beam is screwed to deck or sheathing and the compression flange is unbraced, such as a roof purlin or wall girt subjected to wind suction, the bending strength lies between that for a fully braced member and an unbraced member. This is due to the rotational restraint provided by the spaced connections. Therefore, based on numerous tests, the AISI Specification gives the nominal strength in terms of a reduction factor R applied to the nominal strength for the fully braced condition (Art. 10.12.1): 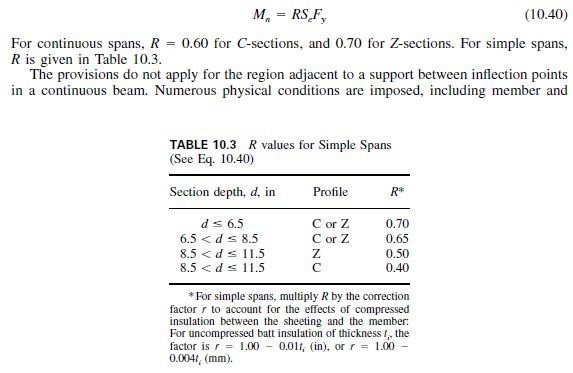 If the flange of a supporting beam is fastened to a standing seam roof system, the bending strength generally lies between that for a fully braced member and an unbraced member, but may equal that for a fully braced member. The strength depends on the details of the system, as well as whether the loading is gravity or uplift, and cannot be readily calculated. Therefore, the AISI Specification allows the nominal strength to be calculated by Eq. 10.40, but with the reduction factor R determined by representative tests of the system. Test specimens and procedures are detailed in the ‘‘Base Test Method’’ given in the AISI Manual. Alternatively, the rules for discrete point bracing (Art. 10.12.2) can be used. 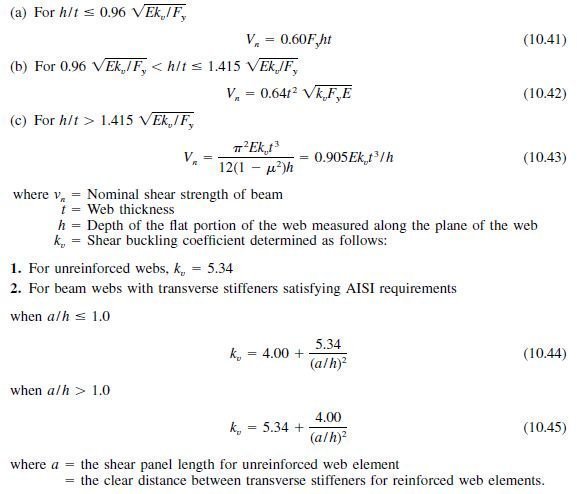 For a web consisting of two or more sheets, each sheet is considered as a separate element carrying its share of the shear force.

Combinations of bending and shear may be critical at locations such as near interior supports of continuous beams. To guard against this condition, the AISI Specification provides traditional interaction equations, which depend on whether the beam web is unreinforced or transversely stiffened. Although similar in concept, for clarity, separate equations are given for ASD and LRFD. Symbols have common definitions except as noted.
ASD Method. For beams with unreinforced webs, the required flexural strength, M, and required shear strength, V, must satisfy the following: 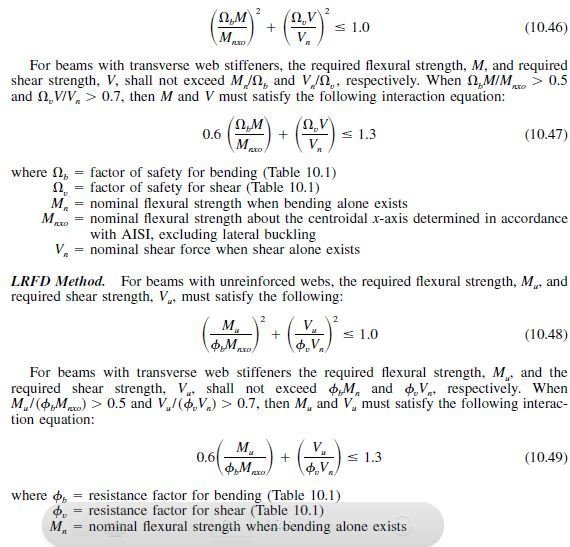 At points of concentrated loads or reactions, the webs of cold-formed members are susceptible to web crippling. If the web depth-to-thickness ratio, h/ t, is greater than 200, stiffeners must be used to transmit the loads directly into the webs. For unstiffened webs, the AISI Specification gives equations to calculate the nominal bearing strength to resist the concentrated load. The equations, which are based on the results of numerous tests, provide for several different conditions for load placement and type of section. They apply for beams 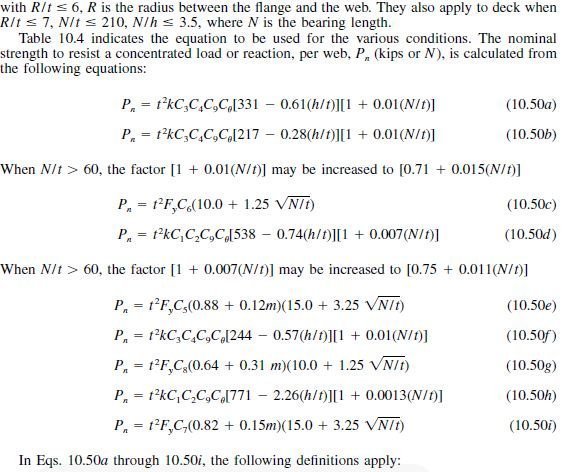 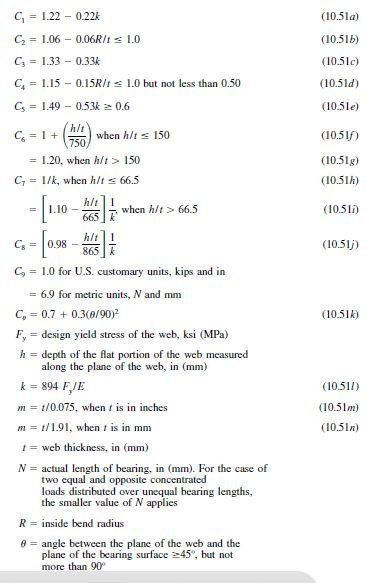 For beams with unreinforced flat webs, combinations of bending and web crippling near concentrated loads or reactions must satisfy interaction equations given in the AISI Specification. Equations are given for two types of webs and for nested Z-sections, with separate equations for ASD and LRFD. See the AISI Specification for various exceptions and limitations that may apply. Symbols have common definitions except as noted.

ASD Method
(a) For shapes having single unreinforced webs: 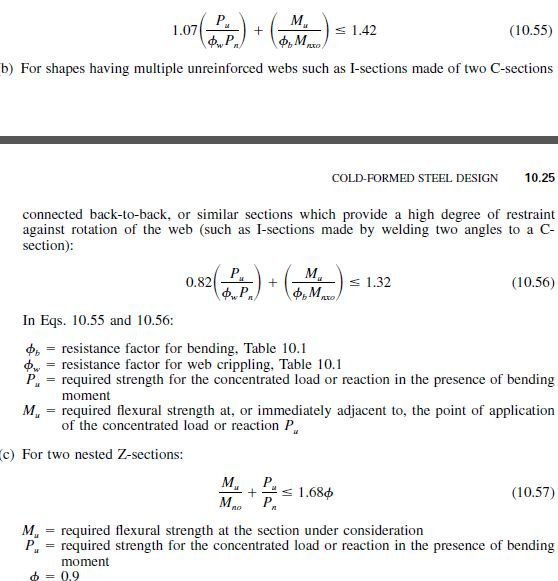