AASHTO classification system — A classification system developed by the American Association of State Highway and Transportation Officials that rates soils relative to their suitability for road embankments, subgrades, subbases, and basis.
Atterberg limits — Water contents at which soil changes engineering behavior; the most important ones in classification are the liquid limit and plastic limit.
Boulders — Rock particles larger than 9 to 12 inches or 200 to 300 mm.
Clay — Fine-grained soil that exhibits plasticity.
Coarse grained — Soils that are retained on a No. 200 sieve.
Coarse fraction — In the Unified Soil Classification System, that portion of a soil sample retained on a No. 200 sieve.
Cobbles — Rock particles smaller than a boulder but larger than 3 inches (75 mm).
Coefficient of curvature — A mathematical parameter, D2
30/(D60D10), used as a measure of the smoothness of a gradation curve.
Coefficient of uniformity — A mathematical parameter, D60/D10, used as a measure of the slope of a gradation curve.
D10 size — The grain size, in mm, for which 10% by weight of a soil sample is finer.
Effective grain size — Another name for the D10 size.
Fat clay — Highly plastic clay; clay with a liquid limit greater than 50.
Fine fraction — In the unified soil classification system, that portion of a soil sample passing a No. 200 sieve.
Fine grained — Soil passing a No. 200 sieve.
Grain-size analysis — The determination of the relative proportions of soil particles of each size in a soil sample, performed by passing the sample over a nest of sieves.
Grain-size distribution curve — A plot of percent finer or coarser versus soil-grain size. Grain size is plotted on a logarithmic scale.
Granular material — In the AASHTO classification system, soil with less than 35% passing the No. 200 sieve.
Gravel — Soil or rock particles smaller than 3 inches but retained on a No. 4 sieve (Unified Soil Classification System) or on a No. 10 sieve (AASHTO system).

Lean clay — Clay with low plasticity; clay with a liquid limit less than 50.
Liquid limit — The water content above which soil behavior changes from a plastic solid to a viscous liquid.
Median grain size — The grain size for which one-half of a soil sample, by weight, is larger and half is smaller.
Nest of sieves — A stack of sieves of different sizes, having the largest opening on the top and progressing downward to successively smaller openings.
Peat — A highly organic soil, dark brown to black in color, with noticeable organic odor and visible vegetable matter.
Plastic limit — The water content above which the soil behavior changes from a brittle solid to a plastic solid.
Plasticity — The ability of a soil, when mixed with water, to deform at constant volume.
Plasticity index — The difference between the liquid and plastic limit.
Sand — Soil particles retained on the No. 200 sieve that pass the No. 4 sieve (Unified Soil Classification System) or the No. 10 sieve (AASHTO system).
Shrinkage limit — The water content at which further reduction in water content does not cause a further reduction in volume.
Sieve analysis — A grain-size analysis using a nest of sieves.
Silt — Fine-grained soil having a low plasticity index or not exhibiting plasticity.
Unified Soil Classification System — A descriptive classification system based on Casagrande’s airfield system and now standardized by ASTM D 2487-93. 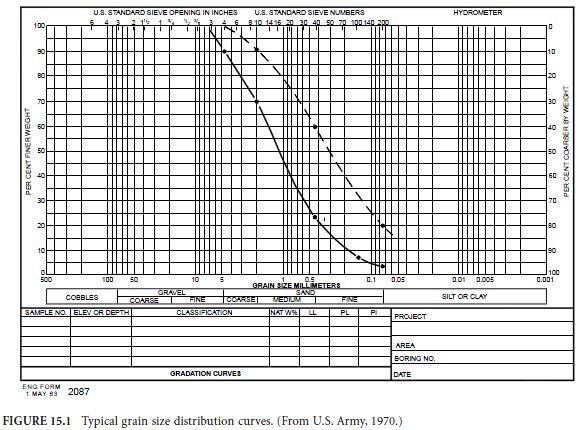 The plasticity index , denoted PI or I P , is the difference of the liquid limit and the plastic limit: