Traditionally in codes of practice for the structural use of concrete, it has been understood that the thickness and quality of concrete cover to reinforcing steel are important factors determining the level of protection provided to the embedded metal. As long ago as the mid-1970s, for example, the former British Standards Institution Code of Practice for the Structural Use of Concrete, CP110:1972 (as amended Feb 1976) stated: `Cover to reinforcement should be determined by considerations of fire resistance and durability under the envisaged conditions of exposure.’ It then went on to tabulate, for various conditions of exposure that were categorised as `Mild’, `Moderate’, `Severe’, `Very Severe’ or `Subject to Salt Used for Deicing’, nominal values of cover thickness in millimetres that were considered appropriate when different grades of concrete were used with characteristic strengths ranging from 20 to 50 MPa or greater. It also stated that the `actual cover’ was required to be `not less than the required nominal cover minus 5 mm’. Such recommendations, however, were not based on explicit recognition of the mechanisms and rates of the processes liable to be involved in causing deterioration of the structures concerned or on their expected working lives and possible maintenance requirements. With the benefit of hindsight, it is also clear that the stated cover tolerance of only 5mm was an over-optimistic assumption in many cases.

By the early 1980s, it had become evident that a more scientific basis for the design of reinforced concrete structures to meet expected levels of performance in corrosive environments of different severity was needed. This led to concerted efforts at modelling the deterioration of reinforced concrete in such environments, the most significant contribution being the simple model proposed by Tuutti (1982), which has formed the basis for most of the subsequent developments in this area. As shown in Fig. 5.7, the model represents the service- life of a structure exposed to the action of carbonation and/or chloride ingress, in the absence of remedial interventions, as being the sum of two components:

(a) an initiation time or `safe-life’ (t0), during which the cover zone of the concrete is penetrated by the aggressive agents until they reach sufficient concentration at the surface of the outermost steel bars to cause depassivation;
(b) a propagation time or `residual-life’ (t1), during which the depassivated
steel corrodes at a rate that eventually results in a limit state being reached, usually identified by failure of serviceability associated with cracking or spalling of the concrete cover.

On the basis of this model, it has been generally understood that the recommendations in codes of practice regarding concrete cover thickness are intended to ensure that, except in cases where the exposure environment is so mild that the propagation time (t1) can be assumed to be adequately long (e.g. in very dry internal atmospheres within buildings), the initiation time (t0) should represent a substantial fraction of the intended service-life of the structure. 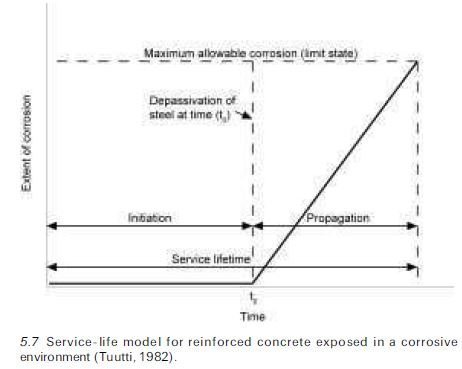