The moment-distribution method is one of several displacement methods for analyzing continuous beams and rigid frames. Moment distribution, however, provides an alternative to solving the system of simultaneous equations that result with other methods, such as slope deflection. (See Arts. 3.36, 3.37, and 3.39.) 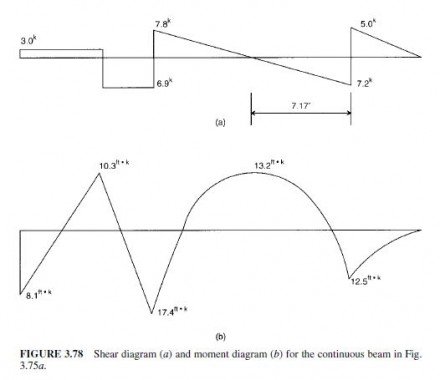 Moment distribution is based on the fact that the bending moment at each end of a member of a continuous frame equals the sum of the fixed-end moments due to the applied loads on the span and the moments produced by rotation of the member ends and of the chord between these ends. Given fixed-end moments, the moment-distribution method determines moments generated when the structure deforms.
Figure 3.79 shows a structure consisting of three members rigidly connected at joint O
(ends of the members at O must rotate the same amount). Supports at A, B, and C are fixed
(rotation not permitted). If joint O is locked temporarily to prevent rotation, applying a load on member OA induces fixed-end moments at A and O. Suppose fixed-end moment MOA F
induces a counterclockwise moment on locked joint O. Now, if the joint is released, MOA F
rotates it counterclockwise. Bending moments are developed in each member joined at O to balance MOA F. Bending moments are also developed at the fixed supports A, B, and C. These moments are said to be carried over from the moments in the ends of the members at O when the joint is released.
The total end moment in each member at O is the algebraic sum of the fixed-end moment before release and the moment in the member at O caused by rotation of the joint, which depends on the relative stiffnesses of the members. Stiffness of a prismatic fixed-end beam is proportional to EI/L, where E is the modulus of elasticity, I the moment of inertia, and L the span.
When a fixed joint is unlocked, it rotates if the algebraic sum of the bending moments at the joint does not equal zero. The moment that causes the joint to rotate is the unbalanced moment. The moments developed at the far ends of each member of the released joint when
the joint rotates are carry-over moments. 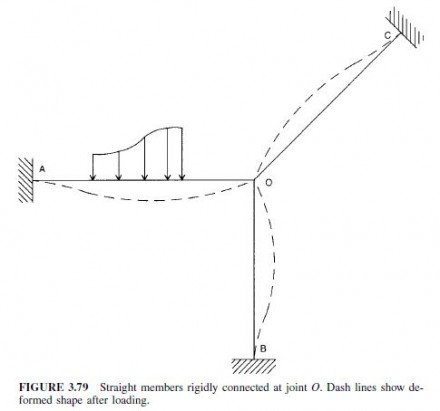 The procedure is then continued by unlocking joint C. After distribution of the unbalanced
moments at C and calculation of the carry-over moment to B, the joint is locked, and the
process is repeated for joint B. As indicated in Fig. 3.80b, iterations continue until the final end moments at each joint are calculated to within the designer’s required tolerance.
There are several variations of the moment-distribution method. This method may be extended to determine moments in rigid frames that are subject to drift, or sidesway. 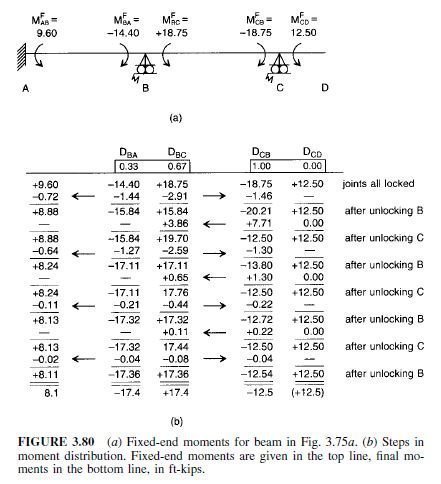