Roof coverings may be classified into two main groups in accordance with the slope of the roof. Low-slope roof coverings generally utilize a weatherproofing membrane and are designed for slopes on which water proceeds slowly to drainage outlets. Steep-slope roof coverings are designed for roofs with swift drainage. Generally, they are considered ‘‘water shedding’’ and are comprised of many individual pieces or components installed in a shingle fashion to shed water from one course to the next.

This is the traditional low-slope membrane roof covering. It is composed of bitumen (either asphalt or coal tar), usually applied hot, felts (either organic, glass-fiber, or polyester), and a surfacing, such as aggregate, coating, or cap sheet (Fig. 12.1). The membrane is composed of three to five plies of felt (as few as two plies are sometimes specified when polyester felt is used). The first ply is typically either set in a continuous layer of hot bitumen or is nailed to the deck. Subsequent layers of felt are set in a continuous layer of hot bitumen.
An alternative to a traditional BUR is the protected-membrane roofing system.
It consists of several layers installed in a sequence different from the usual one in which insulation is placed below the roof deck. First, standard built-up roofing is applied directly to the deck. Then, rigid insulation that is impervious to moisture, such as extruded polystyrene foam, is bonded to the top of the built-up roofing with a mopping of steep asphalt (Fig. 12.2). A layer of 3⁄4-in crushed stone (1000 lb /square) or paving blocks or structural concrete on top of the insulation completes the assembly. Gravel or slag should not be used, because the sharp edges would damage the bare insulation underneath.
The theory is that the insulation, set above the roofing, both insulates the building and protects the built-up roofing from the harmful effects of thermal cycling, ultraviolet degradation, weathering, and roof traffic. Most common defects caused by these elements, such as blistering, ridging, cracking, alligatoring, and wrinkling, are virtually eliminated. 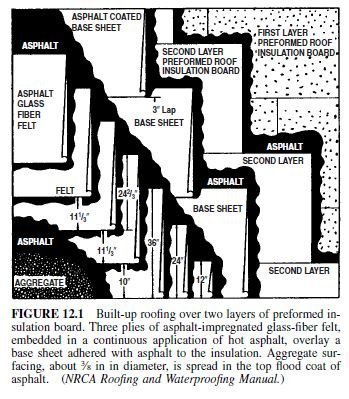 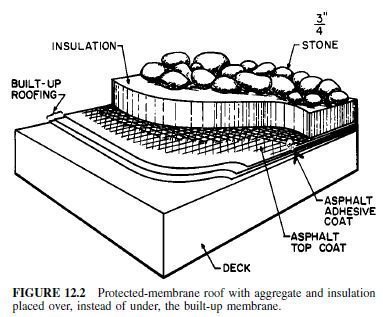 Bitumen may be asphalt or coal tar. Roofing asphalt is a derivative of petroleum.
It is described in ASTM Standard D312, which includes specifications for Types I, II, III, and IV. Each type has a different softening-point range, which should be considered by the specifier when specifying the type of asphalt to be used. Coal tar, described in ASTM D450, is a derivative of the production of coke from coal.
Type I is referred to as ‘‘old-style pitch.’’ Type II is used for below-grade waterproofing.
Type III, or coal-tar bitumen, was developed to be less of an irritant during application than Type I; however, Type III is no longer produced.
Felts are sheet materials used to reinforce waterproofing and roofing membranes.
The predominant type of felt used is glass fiber although organic felts are still commonly used in the construction of coal-tar systems. Polyester is an alternative  type of felt. Asbestos felts were used in the past but are no longer produced in the United States.
There are two primary categories of felt—base sheets and ply sheets. Base sheets are heavier felts that are often used for the first layer of felt to be installed.
If the felt is to be nailed, a base sheet is recommended because of its greater strength. Ventilating base sheets are intended to allow for the venting of moisturevapor pressure by lateral (horizontal) movement. However, if a ventilated base sheet is to be used, the designer should take into account the small driving force for horizontal moisture transport and the small amount of moisture that can be moved horizontally.
Surfacings as applied to built-up membranes, are typically small pieces of aggregate or slag, liquid-applied coatings, or a cap sheet. Common coatings include cutbacks and emulsions, which are both cold-applied. Cutbacks are composed of asphalt and solvent and often include an aluminum pigment for reflectivity. Emulsions consist of clay and asphalt particles dispersed in water. Some emulsions include aluminum pigment or titanium dioxide for reflectivity. The cutback and emulsion coatings are available in fibrated or nonfibrated grades. Latex (acrylic) coatings are also available, but for built-up roofs, these coatings are not used as often as the other types of coatings. Cap sheets are heavy coated felts that are factory surfaced with mineral granules.
Cold-process roof coverings (also known as cold-applied) are similar to hotapplied BUR, except that instead of hot bitumen, asphalt-based cutbacks or emulsions are typically used. They are applied by sprayer, brush, broom, or squeegee.