An arch is a curved beam, the radius of curvature of which is very large relative to the depth of the section. It differs from a straight beam in that: (1) loads induce both bending and direct compressive stresses in an arch; (2) arch reactions have horizontal components even though loads are all vertical; and (3) deflections have horizontal as well as vertical components (see also Arts. 5.6.1 to 5.6.4). Names of arch parts are given in Fig. 5.93.

The necessity of resisting the horizontal components of the reactions is an important consideration in arch design. Sometimes these forces are taken by the tie rods between the supports, sometimes by heavy abutments or buttresses.
Arches may be built with fixed ends, as can straight beams, or with hinges at the supports. They may also be built with a hinge at the crown. 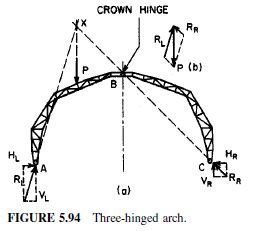 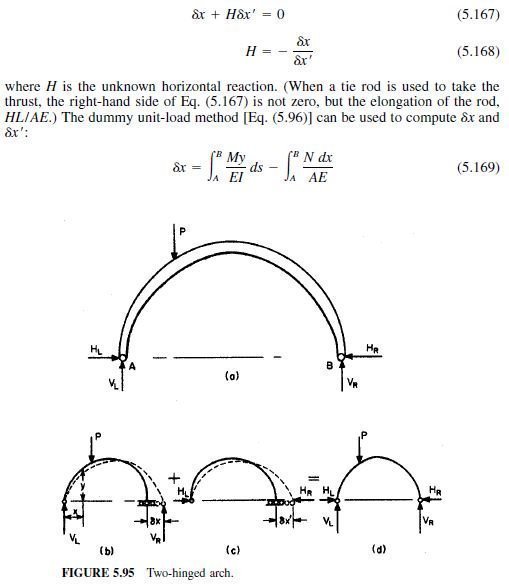 where   the angle the tangent to the axis at the section makes with the horizontal.
Unless the thrust is very large and would be responsible for large strains in the direction of the arch axis, the second term on the right-hand side of Eq. (5.169) can usually be ignored.
In most cases, integration is impracticable. The integrals generally must be evaluated by approximate methods. The arch axis is divided into a convenient number of sections and the functions under the integral sign evaluated for each section. The sum is approximately equal to the integral. Thus, for the usual two-hinged arch,