A variety of different fibres are used to reinforce concrete and the nature of their distribution throughout the concrete ± the layout ± has implications for the effectiveness of their reinforcing action. Fibres may be continuous (or `long’) or more commonly discontinuous (or `short’). They may also be aligned or randomly distributed in 2-D or 3-D (Fig. 9.1). Mixed fibre layouts are possible; in corrugated thin sheets, short randomly oriented 2-D fibres, distributed throughout the matrix, may be supplemented by continuous aligned fibres in the ridges and troughs to provide directional stiffness. The use of textiles or woven mats of fibres is also being investigated by many organisations. The effect of layout on behaviour is explained in more detail in Section 9.1.3.

Almost every imaginable type of fibre has been investigated as reinforcement for concrete at some time. A brief summary of the commercially important or promising types in use is given below, derived partly from a number of excellent general-purpose frc references (Bentur and Mindess, 1990, Majumdar and Laws, 1991, Majumdar, 1992, Johnston, 2001, Zheng and Feldman, 1995) in which further details can be found.

Glass fibres are used mainly in thin-sheet frc. E-glass fibres, as used for reinforcement of polymers, corrode very quickly in cement matrices so the fibres are normally made from an alkali-resistant glass based on SiO2±Na2O± Al2O3±ZrO2 chemistry. They are supplied in rovings of up to 64 strands. Each strand normally has ~200 filaments of ~14 um diameter. Nowadays the size used to hold the strands together also actively modifies hydration at the fibre-cement interface, imparting greater durability; this is known as `second-generation’ fibre (as opposed to older `first-generation’ fibres where the size was not active vis-aÁ- vis durability). The roving may be supplied in continuous or pre-chopped form to suit different frc manufacturing routes. Glass-fibre mats or weaves are increasingly popular. Glass fibres are used mainly to provide primary reinforce- ment at Vf ~ 5% but can also be used for crack control at lower volume fractions. Typical properties include a strand strength of 1500 MPa, modulus of 70 GPa and a strain to failure of ~2%.

Most common polymers have a modulus of elasticity rather lower than that of a cementitious matrix and thus their use in frc is normally limited to providing `post-peak’ (see Section 9.1.4) toughness, strength or impact resistance. How- ever, since these are all very useful properties, wide use is made of various polymer fibres. Most common is polypropylene (PP), usually in the form of a fibrillated film made from splitting and stretching PP sheets or extruded tapes. The film is 15±100 um wide. Thus the individual `filaments’ are tape-like rather than cylindrical. The modulus and strength of such fibres can vary widely, from 1±18 GPa and 300±700 MPa respectively depending on the manufacturing method. Since the PP is hydro- phobic, it is usually surface treated to improve bond with, and dispersion throughout, the cementitious matrix. Typical Vf is about 5%. Polyethylene (PE), acrylics, polyvinyl alcohol (PVA) and nylon fibres have all also been investigated for use in frc but of these, only PVA has been developed commercially specifically for frc. Polyester fibres are not suitable for frc. Some recent research interest has been shown in using aramid fibres (e.g., KevlarÕ, TwaronÕ) in frc. These have much higher moduli and strengths than ordinary polymers (up to 125 GPa and 3000 MPa respectively) and thus would provide more efficient primary reinforcement. The price of such fibres at present restricts their commercial development in frc but this may change.

A huge variety of natural fibres ± i.e. those derived from plants (or rarely, animal pelts) ± have been used to reinforce brittle matrices over the millennia. The motivation is normally use of a local, cheap and sustainable resource, as from a technical point of view, such fibres and their derivatives are inferior to, e.g. glass, steel or PP. They are generally divided into two classes. Unprocessed fibres are naturally fibrous materials subject to minimal processing before use, e.g. jute (aplant stem), sisal (derived from a leaf) or coir (coconut husk fibres). Processed fibres are cellulose fibres extracted from, e.g. wood chips or bamboo; this class may include fibres derived from a waste stream, e.g. sugar cane fibres or nut husk fibres. They all have features in common; each individual fibre is in effect a strand, containing in the order of 100 cells, each <50 um across and 1±2mm long. Each cell has a central pore or `lumen’ and walls made of a composite of crystalline cellulose fibres in a matrix of lignin and hemi-cellulose. The cells have a tendency to absorb water and the fibre properties are strongly dependent on the water content. Increased processing aims to reduce the lignin and hemi- cellulose content and thus concentrate the cellulose fibres, increasing strength, stiffness, water resistance and integrity. Properties are highly variable; strength ranges from 200±800 MPa, and modulus from 10±30 GPa.

Carbon and other ceramic fibres

Carbon fibre is the darling of the high-performance product industry and known to expert and layman alike; thus it was inevitable that it would be investigated eventually for use in frc. It remains expensive but as the price of fibres falls it may one day become a viable ingredient for commercial frc, and the amount of research work reported on it requires that it be mentioned. Carbon fibres come in two types; PAN-based and pitch-based, which refers to the starting materials used. The former have superior properties to the latter and are correspondingly more expensive, and so pitch-based fibres are normally considered for frc. Each fibre is a tow, made up of ~10 000 filaments each up to 15 um in diameter. The filaments consist of stacked layers of graphite. The properties of the fibre increase as the regularity of this stacking increases, i.e. a greater proportion of the layers are aligned parallel to the fibre axis. For pitch-type fibre, the modulus and strength is about 30 GPa and 600 MPa respectively. PAN-type fibres are about 10 times stiffer and 4 times stronger than this. Matrices for carbon-frc have to be specially designed in order to ensure that the fibres are properly dispersed. Other ceramic fibres have occasionally been used in frc, e.g. alumina, alumino-silicate or wollastonite but with little commercial success.

Asbestos-frc has been, historically, the most prolific and successful frc variant, used the world over for roofing, cladding, fire-proofing, etc. The term asbestos covers a range of naturally occurring crystalline silicate fibrous materials. The individual fibres are less than 0.1 um across and form bundles, which in the natural state may contain millions of fibres, but are broken down to strands of 10±100 fibres during processing. Their properties make them ideal for rein- forcing cement; they are very stiff and strong (170 GPa and up to 4500 MPa), bond exceptionally well to the cement matrix and are not prone to degradation during processing or because of the harsh cement matrix conditions. Unfor- tunately, accidental ingestion of these very fine silicate fibres by production and installation/demolition workers is known to cause a variety of respiratory diseases, including bronchial, lung and stomach cancers (Health and Safety Commission, 1979). The use of asbestos-frc is now banned in most developed countries and the commercial need to find replacements is the motivation behind much relatively recent frc research.

By tonnage, steel-frc is probably the most successful of all. Steel fibres are rather different from any of those described above. They are generally of larger cross-section, with an `equivalent diameter’ of 0.5±1mm and lengths varying between 20 and 60 mm. They may have a shaped cross-section, often varying along the length to form hooked, barbed or crimped fibres, intended to increase the anchorage between the fibre and the matrix. Carbon steels are normally used; where a greater degree of corrosion resistance is required (e.g., in marine applications), alloy steels, stainless steels or galvanised steels may be substituted. The modulus of steel fibres is ~200 GPa, and strengths vary between 350 and 1000 MPa. Steel fibres cannot be added in sufficient quantity to provide any primary reinforcement (Vf normally <2% for workability reasons), thus they are intended to provide crack control and post-peak tough- ness. Steel-frc is often used as a matrix for high-performance steel-bar rein- forced concrete (RC) as the steel fibres reduce crack width in cracked sections and thus slow down corrosion of the rebars. 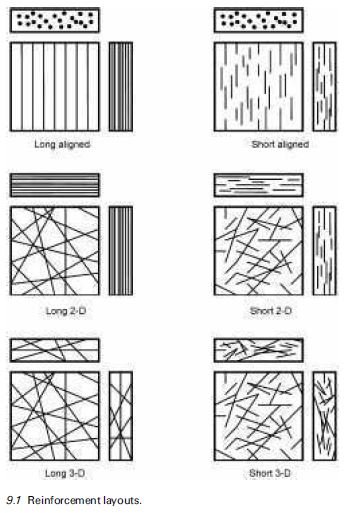