In order to discuss the time-dependent changes in the behaviour of frc, it is necessary to introduce in broad terms the concepts used to describe the mech- anical behaviour of such composites in general. This is because degradation often does not just involve simply a change in the value of a single property, e.g. strength, but often involves a change in the mode of failure.

Composite materials approach
Figure 9.2a shows an idealised stress-strain curve for a typical frc. Four important regions can be identified. In region I ± the pre-cracking region ± the matrix and fibre act together in the normal composite manner. The composite modulus, Ec, can be predicted from the moduli of the matrix, Em, and the fibres, Ef , using the rule of mixtures, i.e.: 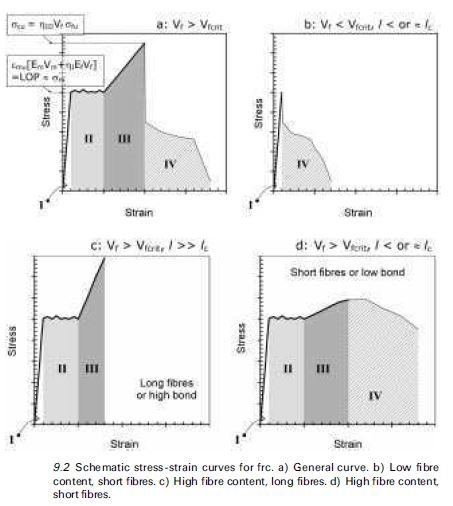 equation 9.1 that the improvement in pre-cracking properties imparted to the matrix by the fibres is minimal.
When the failure strain of the matrix mu is reached, the first crack occurs and
region II ± the multiple cracking region ± begins. The stress at which this happens, variously referred to in frc literature as the loss of proportionality (LOP), `bend-over point’ (BOP) or `first crack strength’, can be calculated from equation 9.1 by assuming that the strain at first crack is the failure strain of the matrix and assuming strain compatibility between fibre and matrix, but is rarely much different to the matrix strength mu. In this region, stress is progressively transferred from the matrix to the fibre as the matrix develops a network of increasingly closely spaced cracks. This is the beginning of the `useful’ action of the reinforcement in frc ± imparting strain capacity and toughness far in excess of that of the matrix alone. Toughness is related to the area under the stress-strain curve; it can be seen that compared to that imparted by even modest fibre action, the toughness of the matrix alone is essentially zero. The existence of region II was predicted by Aveston et al. (1971) (`ACK theory’) and has been confirmed by most subsequent investigators. This region can only be properly mobilised if there are sufficient fibres to carry sustained, increasing load when the matrix breaks; thus there is a critical volume fraction of fibres Vfcrit that can be approximated to (Purnell, 1998): 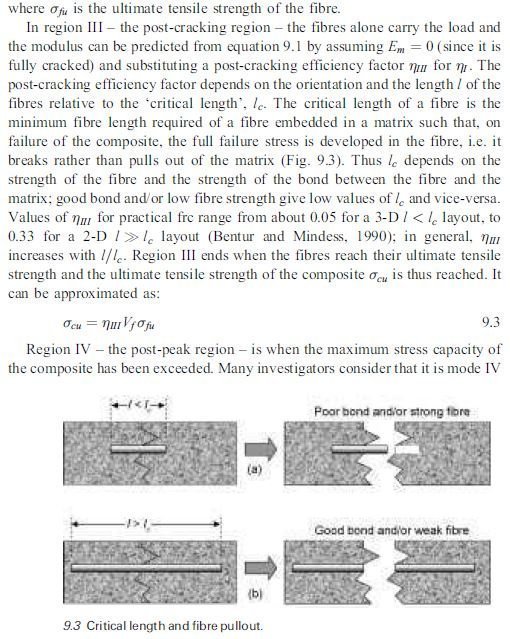 behaviour that expends the greatest energy during composite failure and thus imbues the composite with the greatest toughness. This is especially true in frc made such that Vf is less than or comparable to Vfcrit, a common occurrence, e.g. when using relatively weak natural fibres or when adding more fibres would cause workability problems (e.g., steel-frc). In such cases, regions II and/or region III may be greatly reduced or even absent from the stress-strain curve and all the toughness over and above that of the matrix is derived from post-peak pullout, region IV behaviour (Fig. 9.2b). For frc where l >>lc (i.e., bond is very strong or fibres are very long) this region is very small or non-existent, as there is sufficient stress transfer between the fibre and matrix for the fibres to fracture and the composite will simply break in two upon reaching peak stress (Fig. 9.2c). Where the fibre length is comparable to or less than lc (i.e., bond is weak or fibres are short) many of the fibres will not have had their full stress capacity mobilised at peak composite stress and they will begin to pull-out of the matrix; although initial ultimate strength may be lower, the toughness will be increased (Fig. 9.2d). In most cases, there will be some overlap between regions III and IV.

However, the manifestation of this type of behaviour is frequently unpredictable and critically dependent on the testing regime used. In a load controlled stress-strain test (i.e., where load is uniformly incremented with time), region IV is never seen; it can only be seen in a stroke-controlled test (i.e., where displacement is uniformly incremented with time) and even then is highly sensitive to the stroke rate used. While it is not disputed that region IV behaviour is important, it is imperative that attempts to quantify it and discuss its nature employ standard tests (e.g. ASTM C1018) and not the ad-hoc procedures so common in the literature.

Fracture mechanics principles are often invoked to describe the reinforcing effect of fibres, especially at low fibre volume fractions typical of steel-frc. The detail of the modelling is outside the scope of this chapter but it is reviewed by Bentur and Mindess (1990). In broad terms, two concepts are important with regard to durability of frc. First, in cracked frc, fibres are known to span the cracks and help hold them together. This helps to suppress further propagation of cracks (i.e., it requires that more energy input is required for cracks to grow than in unreinforced materials) and thus increases the toughness of the composite. Secondly, since the fibre-matrix interface tends to be weaker than the bulk matrix (analogously to the transition zone in ordinary concrete), cracks travel- ling through the matrix will tend to divert along this interface. Geometrical considerations and studies of the strain energy release rate for debonding vs normal cracking suggest that further propagation will require more energy input than in unreinforced matrix and thus again, an increase in toughness is predicted. 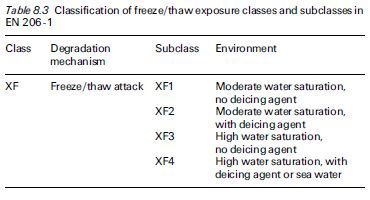