Brittle fracture may occur in high-strength steels, particularly under the influ- ence of rapidly applied tensile stress. This is the case in prestressing steels when there is a fracture under loads below those corresponding to the permissible pre- strain, due to:

Uniform corrosion (e.g., after prolonged weathering on a building site) generally does not have any major impact on load-bearing capacity unless the cross- section is substantially reduced. Reduction in cross-section may happen if prestressing steels in ungrouted tendon ducts are exposed over a long period of time to water and oxygen via non-airtight anchorages or construction joints. If, however, the prestressing steel suffers local corrosion attack in the form of pitting corrosion, the load-bearing capacity may fail at an early stage due to brittle fracture (Fig. 6.2). The following effects are capable of triggering such attacks in prestressing steel:

· The presence of contaminated water in the yet-to-be injected ducts of post- tensioning tendons, which results from bleeding of the concrete during con- struction. The steel may suffer from severe pitting corrosion in the ungrouted and non-prestressed condition, and the load-bearing capacity can be reduced considerably. Bleeding is the separation of fresh concrete, when the solid content sinks down and displaced water rises or penetrates the inner hollows. The separated water may contain significantly high amounts of sulfates and chlorides (Table 6.3) due to leaching of the construction materials, cement, aggregates and water. The high sulfate concentration results from the gypsum in the cement. The watery phase of fresh concrete penetrates into the ducts through the anchorages, couplings and defects in the steel sheet of the duct and accumulates at the deepest points. The alkaline water carbonates quickly in the presence of air. The steel can therefore suffer from intense pitting even before being prestressed and grouted, which can lead to pitting depths of up to 1mm within a few weeks.

· Ingress of water containing chloride in a non-grouted tendon duct, e.g. above non-airtight anchorages or joints, may lead to damaging local corrosion in the prestressing steel throughout its lifetime (Fig. 6.2). Comparable attacks must be expected where the concrete cover is too thin or too permeable and so permits chloride salts to penetrate to the tendon.

The performance characteristics of corroded prestressing steels can be deter- mined in tensile, fatigue and stress corrosion tests14 (Fig. 6.3). Tests to establish the residual load-bearing capacity are carried out on damaged prestressing steel samples, for instance as part of the inspection of older buildings, and help provide the information necessary for effective repair. High strength prestressing steels are far more sensitive to corrosion attack than reinforcing steels. This sensitivity  is revealed by testing with tensile testing being less effective than fatigue tests which, in turn, are less sensitive than stress corrosion tests. In the case of uneven local corrosion, a corrosion depth of 0.6mm may be enough to cause breakage in a cold-deformed wire under tension at 70% of the specified tendon strength of about 1800 N/mm2 (Fig. 6.3, tensile test). At pitting depths greater than 0.2 mm, cold-drawn wires may show fatigue limits (fatigue limits for stress cycles of N  2  106) of 100 N/mm2 or less (Fig. 6.3, fatigue test). As-new smooth surfaced steels normally show a fatigue limit of more than 400 N/mm2. 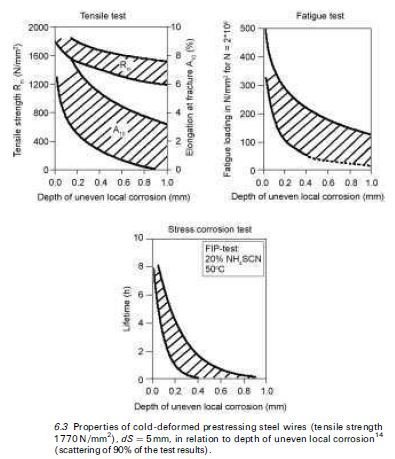 Of all the performance characteristics of prestressing steels, local corrosion has the most detrimental effect on the susceptibility to hydrogen-induced corro- sion cracking. In a test developed by FIP (see Section 6.6), the prestressing steel is immersed under tension in an ammonium thiocyanate solution and a minimum and average time of exposure before failure is specified. For cold-drawn wire and strands, these values are of the order of 1.5 and 5 hours respectively. In the example shown in Fig. 6.3 (stress corrosion test), these lifetimes are not achieved at corrosion depths of > 0.2 mm.

Fractures in prestressing steel resulting from corrosion-induced hydrogen embrittlement may occur, for instance, when prestressing to a high stress level, or shortly after the prestressing, when the steel has spent some time in unfavourable corrosion conditions and has therefore absorbed high quantities of hydrogen. If steel tendons are properly and swiftly processed, however, such damage should not occur. 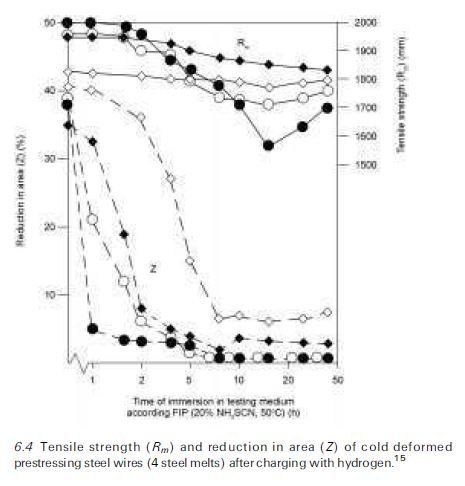