As noted previously, the reactions between atmospheric CO2 and alkaline components of concrete produce a carbonated surface layer in which the pore solution pH value is depressed to near-neutral levels. A secondary effect of carbonation, also significant in terms of its influence on corrosion, is that it can cause the release of bound chloride ions into the pore solution phase of concrete that contains a modest level of chloride salt as a contaminant, thus exacerbating the corrosive nature of the electrolyte (Tuutti, 1982). Carbonation depths may be measured by a number of methods, the simplest and most widely used of which involves the application of phenolphthalein indicator solution to a freshly exposed section of the concrete, the approximate boundary between carbonated and non-carbonated material being marked by an indicator colour change from colourless to pink, denoting a change in pH around a value of about 10 (RILEM TC CPC-18, 1985).

Assuming (i) that the rate of carbonation of concrete is controlled simply by diffusion of CO2 across a carbonated layer of constant diffusion coefficient (D), (ii) that the quantity of CO2 required to neutralise the alkaline components (a) within every unit volume of the concrete is constant and (iii) that the CO2 concentration varies linearly between fixed boundary values of c1 at the external surface and c2 at the carbonation front, it may be shown (Kropp, 1995) that the depth of carbonation (x) in millimetres is related to the exposure time (t) in years by a parabolic relationship:

where the constant of proportionality K (mm/y1/2) is a `carbonation coefficient’ for the particular system. Its magnitude reflects the influence of the various factors affecting the parameters D, a, and c1 – c2 which include the following: D dependent on: porosity, pore size distribution, pore continuity and tortuosity, degree of saturation, relative humidity and temperature a dependent on: cement content of concrete and CaO content of binder c1 – c2 dependent on: atmospheric CO2 concentration.

Although the assumptions involved in the above treatment are somewhat simplified, the parabolic expression has often been found to be reasonably accurate for describing the progress of carbonation in concrete which is sheltered from rain (Wierig, 1984). It is also useful in revealing several of the important factors related to concrete quality and environment that influence carbonation rates. For instance, variables that affect D include water/cement ratio, compaction and curing as they control the pore structure of concrete. Similarly the effects of environmental variables that affect the degree of saturation of the pores can be interpreted because, whilst carbonation requires some internal moisture to be present to allow the `through-solution’ conversion of portlandite to calcium carbonate and other reactions to take place, an increasing proportion of water-filled pores tends to impede gaseous diffusion of CO2 and so retards carbonation. As shown in Fig. 5.8, the net result is that maximal rates of carbonation are observed when concrete is exposed to atmospheres in which the relative humidity is maintained at an intermediate level, typically in the range 50±75% RH (Richardson, 2002), which corresponds to values often encountered for internal air within buildings in temperate climates. 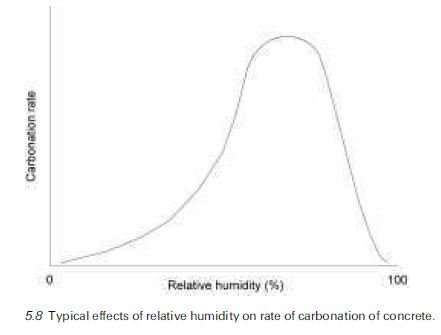 Although the simple x  Kt1=2 model outlined above gives a useful approximate method for predicting carbonation depths and has often been used practically in the assessment of structures (Menzies et al., 1987), it has limitations, particularly when applied to concrete that is exposed to high relative humidities or to intermittent wetting for long periods. In these circumstances, it tends to predict higher long-term carbonation depths than those that are actually observed. Numerous empirical studies have been made of factors influencing the kinetics of carbonation in both laboratory and site concretes and it has commonly been found that, for a given type of concrete exposed in a given environment, the average depth of carbonation (x) as a function of time can be more closely approximated by relationships of the form:

where A and n are constants for the particular conditions and n is often < 1/2. In sheltered external UK exposure conditions, for instance, where average relative humidity values of ~80±85% may be expected, it has been suggested that the exponent n  0:4 (Hobbs, 2001) and at higher relative humidities or in   unsheltered locations where periodic wetting is experienced even lower values of n are found.
In considering the risk of carbonation-induced corrosion, it is important to distinguish between those conditions that favour high rates of carbonation and those that are conducive to rapid corrosion of steel in carbonated concrete, because fortunately the two sets of circumstances do not generally coincide.
Whereas high rates of carbonation are associated with exposure to internal atmospheres in buildings and low rates of carbonation with damp, unsheltered outdoor exposures, the rates of corrosion of steel in carbonated concrete depend mainly on the electrolytic conductivity of the material, which increases as the proportion of the pores occupied by water (as opposed to air) increases (Alonso et al., 1988). This gives rise to relationships between carbonation-induced corrosion rate and relative humidity of the type shown in Fig. 5.9 (Glass et al., 1991). It indicates that the corrosion rates measured for steel bars that were constantly exposed to carbonated mortar without chloride contamination in atmospheres of RH < 70% were no greater than those typical of passive steel in non-carbonated concrete (< 1 mA/m2). It also demonstrates that the presence of moderate levels of chloride contamination (0.4±1.0% by mass of cement) can have a significant influence on the rates of corrosion that may be induced in carbonated concrete. This illustrates the difficulty that arises when the presence of more than one corrosion-inducing agency contributes to the aggressiveness of the exposure conditions for a particular structure.

In the new European standard for concrete, the English language version of which has been published as BS EN 206-1 (2000), efforts have been made to categorise classes of exposure in such a way as to make explicit the different types of aggressive agency that are expected to cause corrosion or other forms of degradation. Thus for concrete with reinforcement or embedded metal that is kept permanently in a very dry environment, such as that inside buildings with air maintained at very low humidity, there is believed to be negligible risk and the exposure class is designated X0. For concrete containing reinforcement or other embedded metal that is exposed to air and moisture, however, the environment is one where corrosion induced by carbonation must be considered and exposure classes designated XC1, XC2, XC3 or XC4 have been introduced according to the descriptions provided in Table 5.1(a). An informative annex in BS EN 206-1 gives indicative limits for maximum water/cement ratio, minimum cement content and minimum strength class for each of these exposure classes based on CEM1 (Portland cement) concrete with an intended working life of 50 years. It should be noted that these indicative limits are not of general applic- ability and specifiers are required to consult the corresponding advice on limiting values given in national annexes or complementary standards, such as BS 8500 (2002) in the UK.

In addition to concrete quality, nominal values of concrete cover thickness (expressed as minimum values plus an assumed tolerance to accommodate fixing precision) have also to be specified for the various exposure classes. As far as the UK is concerned, the complementary British Standard BS 8500 recommendations are intended to meet the minimum requirements of 50- and 100-year working lives whilst continuing the established UK practice of allowing a trade-off between concrete quality and cover thickness. The rationale for the British complementary standard recommendations in relation to exposure classes XC1, XC2, XC3 and XC4 has been set out by Hobbs et al. (1998) who based their analysis on published data for well-compacted concretes made from CEM1 (Portland cement) and binders containing pulverised fuel ash, slag and silica fume. 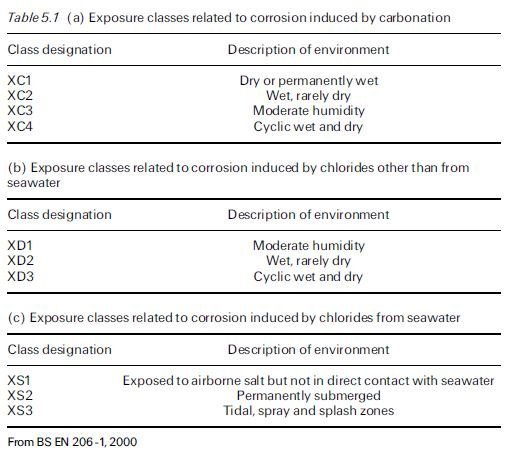 In summary it may be noted that, for temperate climates such as those of the UK, there is normally no intrinsic difficulty in designing structures that should be expected to remain free from significant carbonation-induced corrosion problems for working lives of 50 or 100 years. Where problems have arisen, they have almost invariably been associated with inadequate control of concrete construction practices (compaction, curing, etc.) or with failure to achieve specified cover thickness. The latter is of particular concern because, assuming a simple parabolic relationship between carbonation depth and time, failure to achieve a specified minimum cover of say 25mm by only 5mm (i.e. 20%) will reduce the expected time taken for carbonation to reach the embedded steel by approximately 36%. As surveys of the accuracy of achievement of cover have shown (Clark et al., 1997), specified negative tolerances of 5mm applied to nominal cover have commonly not been achieved in reality. According to the BRE (2000a), while for good quality precast concrete, a range of -+ 5mm of the mean cover may just be attained, this is seldom the case for in-situ concrete where, with good practice, a range of -+10mm of the mean cover will generally be found; in cases where there is little supervision, however, the range may be +-20mm and specific biases in cover may also occur in, for example, the soffits of slabs and beams or columns with offset reinforcement cages.

Before concluding this section on carbonation and its effects, it should be noted that the desire to move away from prescriptive specifications for durability of concrete has stimulated numerous efforts to devise appropriate accelerated testing procedures to provide the data required in models of carbonation-induced corrosion that may be used as a basis for performance specifications. A summary of one such approach was presented recently by Schiessl and Lay (2005). The attendant difficulties for a process such as carbonation, that typically takes many years to penetrate through concrete cover subjected to natural exposure, are evident since major departures from normal conditions are necessary if the tests are to be completed in conveniently short times. Whether such tests can be assumed to have the desired effect of producing a constant degree of accel- eration when applied to different types of concrete, incorporating different constituents, subjected to different curing regimes, etc., remains uncertain, as demonstrated in recent research on modelling the effects of natural and accelerated carbonation (Ishida et al., 2004). Several of the practical difficulties associated with development of a standard test method for assessing the carbonation resistance of different types of concrete under different conditions have also been examined by Jones et al. (2000, 2001). Another approach to modelling carbonation-induced corrosion that depends, not on input data derived from accelerated carbonation testing, but on chemical analysis of the cementitious components of the concrete has been advocated in a recent report of the Concrete Society (Bamforth, 2004). In this model, the concept of an `equivalent buffering capacity’ (i.e., an equivalent content of a benchmark Portland cement) is used in accounting for the effects of mineral additives, such as ground granulated blast furnace slag, pulverised fuel ash, silica fume and metakaolin, incorporated in blended and composite cements. 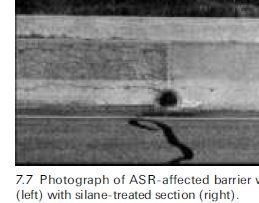