Since passivity represents the principal mechanism by which steel is protected from corrosion in concrete, it is necessary to consider the various factors that might cause this protection to fail. A number of modifications to the chemical composition of the concrete may be involved, in particular the following:
· depletion of oxygen
· depletion of alkalinity due to carbonation
· introduction of chloride ions.
Depletion of oxygen
Concrete structures that are exposed to the atmosphere normally have an abundant supply of oxygen available, both to act as a cathodic reactant at the surface of embedded steel and to cause the transformation of the anodically formed Fe2+ ions to rust. Cases of general oxygen depletion are therefore unlikely to occur except in circumstances where the material is fully immersed in water, buried in saturated soil or surrounded by similar waterlogged media. The effects of progressive reduction in the general availability of oxygen on the cathodic polarisation curves for the reaction:

are illustrated in Fig. 5.5. Also reproduced in this figure, known as an Evans diagram, is a portion of the anodic polarisation curve for steel in alkaline concrete (cf. that shown in Fig. 5.4). Assuming no external electrical power source is being used to supply current to a steel reinforcing bar (i.e. it is exhibiting natural corrosion behaviour), the corrosion currents passing through the anodes and cathodes on its surface must balance one another. Under these conditions, if the `corrosion potential’ of the metal (Ecorr) is measured relative to a reference half-cell (a saturated calomel electrode, SCE, or similar), it will take values that become less noble (i.e. more negative) as the oxygen supply to the steel is progressively reduced, corresponding to the various points shown in Fig. 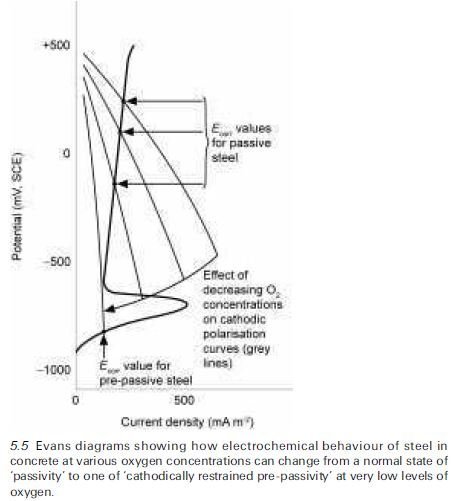 5.5. This indicates that passivity can be sustained over a wide range of oxygen concentrations, but that eventually a stage is reached at which Ecorr falls below a critical value, <ÿ700mV (SCE scale), necessary to maintain a passive film on steel, so the metal is no longer protected in the usual way. Because oxygen is now unavailable to sustain the cathodic reaction at a significant rate, however, the overall corrosion rate remains extremely small, a condition that has been variously termed `active low-potential corrosion’ (Arup, 1983; Page, 1988) or `cathodically restrained pre-passivity’ (Page, 1997). The latter usage avoids creating any misimpression about the practical significance of the condition, which can be readily converted to passivity in the event that the oxygen availability at the steel surface increases.

It should be emphasised that the relatively benign effects of general oxygen depletion described above must be distinguished from the more damaging consequences of local oxygen depletion in corrosion macrocells, which can give rise to a form of localised corrosion known as black or green rust. The environmental conditions under which this unusual type of corrosion may be produced are ones where well-separated anodic and cathodic zones develop over distinct sections of the reinforcement, the former being screened from direct oxygen access; the anodic zones tend to be located at positions where there is voided or badly jointed concrete, saturated with oxygen-denuded, saline water that leaches alkalis and enhances the solubility of Fe2+ ions. Under these circumstances, the normal formation of expansive brown hydrated ferric oxide is suppressed and the anodic dissolution of the metal can yield ferrous compounds, which are green initially but darken rapidly when exposed to air. This can cause substantial loss of metal cross section to occur without showing the usual signs of surface cracking and rust staining of the concrete. Particularly in structurally sensitive locations, it is therefore important to avoid creating inappropriate construction details that are likely to encourage localised ponding of oxygen- denuded saline water in contact with reinforcing bars. Examples of such undesirable details include badly designed and executed joints or failed waterproofing membranes.

Depletion of alkalinity due to carbonation

Depletion of alkalinity is normally the result of long-term exposure of concrete to the air in which variable proportions of carbon dioxide (and lesser quantities of other acidic gases) are present. This causes carbonation of the alkaline constituents of the cement, as illustrated below for portlandite, which reacts to form calcium carbonate, and C-S-H, which reacts to form calcium carbonate and hydrated silica gel:

Removal of a high proportion of the dissolved alkali metal hydroxides from the pore solution phase and incorporation of their cations into the hydrated silica gel reduces the pH within the affected surface region of the concrete to a value < 10 which is insufficient to stabilise the passive film on steel (Anstice et al., 2005). Thus if the carbonated surface layer of the concrete penetrates to the level of the outermost embedded reinforcement, the normal mechanism of corrosion protection by passivation is no longer operative and, in certain circumstances, significant general corrosion of the affected steel may be initiated. Fortunately carbonation is usually a very slow process, at least in temperate climates, and its effects can be dealt with by means of straightforward preventative measures. Nevertheless, it can be an important cause of serviceability failures for aging structures so further details of the process, including factors affecting its rate and that of carbonation-induced corrosion, will be considered in Section 5.4.

By far the most serious cause of corrosion problems affecting reinforcing steel is the introduction of chloride salts as contaminants of the concrete, which can occur either when the material is manufactured (e.g. Fig. 5.1) or during its subsequent exposure to a chloride-laden environment where it comes into contact with seawater or deicing salt (e.g. Fig. 5.2). In either case, the presence of a significant concentration of chloride ions in the alkaline electrolyte phase adjacent to the steel tends to cause localised breakdown of the passive film on the embedded metal, a phenomenon termed pitting, which can result in serious local loss in cross section of the affected regions of the bars with the surrounding regions being virtually unaffected, as shown in Fig. 5.6.

The effect that the presence of chloride ions has on the electrochemical behaviour of steel in alkaline electrolytes, such as saturated calcium hydroxide, is illustrated by the set of anodic polarisation curves shown in Fig. 5.4. These demonstrate that, as the concentration of chloride ions is progressively increased, the range of potentials over which the passive film remains intact becomes smaller, the onset of pitting being denoted by a sharp increase in the anodic current density when the steel potential exceeds a critical value termed the `pitting potential’ (Ep), which is dependent on the chloride concentration and pH of the electrolyte. Conversely, once pitting has been initiated, the steel exhibits hysteresis in its anodic response and can be restored to a passive condition (repassivated) only if its potential is lowered from Ep to a level termed the `repassivation potential’ (Er), which is also dependent on the chloride concentration and pH of the electrolyte. The electrochemical condition of passive steel at potentials < Er is referred to as one of `perfect passivity’, and at potentials in the range Er to Ep as `imperfect passivity’ (Pourbaix, 1974). More detailed consideration of the effects of chloride salts in relation to the corrosion of steel in concrete will be given in Sections 5.5 and 5.6.