Most of the prestressed concrete structures built during the last 50 years, where design and construction have adhered to best practice, have proved to be highly durable.1,2 Analysing the incidence of occasional problems has confirmed that serious failures are rare in proportion to the volume of prestressing steels used worldwide. During the past 40 years, there have been isolated examples of serious failure in post-tensioned and pre-tensioned components (Fig. 6.1).1,3±7 These failures happened either before tension members were grouted (during construction), or during later use, and have been attributed to corrosion ± more precisely to stress corrosion cracking in high-strength prestressing steel. In recent years, several serious corrosion-related failures have occurred5±9 and problems relating to the durability of prestressed concrete structures have become the subject of renewed discussion among all involved in the con- struction process.

The major factors that reduce durability are inadequate design (poor construction), incorrect execution of the planned design (poor workmanship), unsuitable mineral-based building materials, and the use of unsuitable post- tensioning system components, including inappropriate types of prestressing steel. Inadequate design and poor workmanship mean that corrosion control will not be effective. Components will deteriorate rapidly due to environmental influences such as carbonation or chloride ingress, and the anticipated lifetime will be shortened. Unsuitable building materials will also promote corrosion and/or stress corrosion cracking. Sensitive prestressing steels cannot withstand even normal building-site conditions without the risk of failure during use.

Most corrosion defects are caused by water, which seeps through zones of porous concrete or into vulnerable areas such as leaking seals, joints, anchorages or cracks. The water then flows through the network of ducts, depending on the quality of grouting. The major threat is corrosion due to chlorides, which originate from either de-icing salts or seawater.

Fractures in prestressing steel and failures of prestressed concrete structures can, as a rule, be attributed to corrosion-induced cracking. The mechanism of these failures is often not well understood, so it is difficult to establish the necessary recommendations for design, building materials and prestressing systems that would prevent future problems. This chapter presents a survey of degradation of prestressed concrete, highlighting the following features: 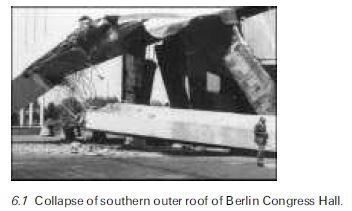