Failure to adequately specify concrete subject to repeated freezing and thawing may lead to various types of internal or near-surface damage but the distinctions between these phenomena are often somewhat arbitrary (Harrison et al., 2001); common manifestations include (i) cracking adjacent to joints (known as D- or D-line cracking), (ii) delamination with general surface scaling or (iii) localised pop-outs.

D-line cracking may be observed in pavement slabs. These pattern cracks occur in the zone adjacent to free edges and joints. They are orientated approximately parallel to joints, both longitudinal and transverse. The cracks initially appear near to the joint or pavement edge. Later freeze-thaw cycles may cause additional cracking, which manifests itself on the surface progressively further from the joint. This may lead to the pattern illustrated schematically in Fig. 8.1 (and in the photograph shown as Fig. 7.1). The phenomenon is caused by expansion of coarse aggregate particles at depth and is a function of maximum aggregate particle size (Dmax). The larger the aggregate the greater is the potential deleterious effect.

Delamination of a surface manifests itself as surface scaling and is either caused by the differential behaviour of layers above and below the frozen zone or the formation of ice lenses. Wet upper layers of concrete may freeze with pro- gressive frozen layers parallel to the surface. In the case of concrete pavements, a wick effect may then draw water from soil under the pavement and feed the freezing process. Expansion of the frozen layers may lead to delamination, a similar phenomenon to that of frost heave in soils (Henry, 2000). Another scenario conducive to delamination occurs in pavements subject to prolonged periods of low temperature. The lower layers may remain frozen for days at a time even though the surface layers thaw during the day. Nocturnal subzero temperatures may lead to the development of an ice front at the surface that moves towards the lower frozen layers. The water lens trapped between the two frozen zones may freeze, expand and cause stresses that delaminate a surface layer as illustrated in Fig. 8.2.

A problem with scaling may also arise locally over aggregate particles near the surface. The weak thin layer of cover concrete over coarse aggregate particles is vulnerable to delamination, as illustrated in Fig. 8.3, if ice forms from the water expelled from the freezing aggregate.

`Pop-outs’
The term ‘pop-out’ is used to describe the detachment of small conical shaped pieces of concrete from the surface. This may occur where freeze-thaw susceptible coarse aggregate is used. Highly absorbent aggregate particles near the surface may become saturated and fracture on freezing. The stresses may crack the cover concrete over the particle. Conical shaped pieces of concrete then detach from the surface, exposing fractured aggregate at the base of the pop-out, as illustrated in Fig. 8.4. 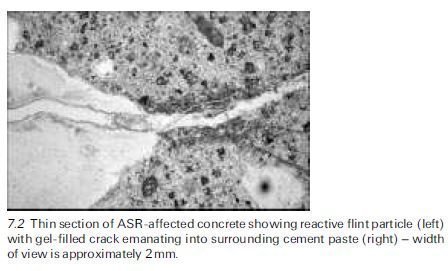