As noted in Section 5.2.3, chloride ions may be introduced into concrete as either mix contaminants or from external sources such as seawater and deicing salts. If present at sufficient concentration, they can depassivate steel and cause pitting corrosion to occur even under the conditions of high bulk electrolyte pH characteristic of concrete pore solutions. The question as to what constitutes a `threshold level’ of chloride contamination that will cause pitting corrosion to occur under various circumstances, however, has proved to be one of the more elusive issues in the field of concrete durability research. It was a topic of debate as long as 30 years ago (Page, 1975) and has continued to attract significant interest in more recent times. This has some important ramifications, first because codes of practice must set limits on the levels of chloride allowed in concreting materials that are reasonably safe while not being unduly restrictive, and secondly because the corrosion initiation time or `safe-life’ of reinforced concrete exposed to a chloride-laden environment is the time taken for chloride penetration of the cover to reach the threshold level at the surface of the embedded steel.

In considering factors that may influence chloride threshold levels, it is useful to outline some of the main features of chloride-induced pitting of steel, both in alkaline environments generally and in concrete under various circumstances. The following points are believed to be significant.

· Pitting corrosion involves a localised process of passive film breakdown, which causes the composition of the electrolyte inside a developing pit to become progressively enriched with respect to chloride ions and denuded with respect to hydroxyl ions due to hydrolysis of the anodic products (Jones, 1992). These features are illustrated schematically in Fig. 5.10 (Page and Havdahl, 1985).
· Pitting is a stochastic process and, all other things being equal, the risk increases as the concentration of chloride ion is increased relative to that of hydroxyl ion in the bulk electrolyte phase in contact with the steel. Evidence for this was provided by early studies of the behaviour of steel in aqueous alkaline environments simulating concrete pore solutions (Hausmann, 1967; Gouda, 1970). It was confirmed by investigations of the behaviour of steel in laboratory specimens of concrete exposed to chloride ingress and pore

solution analysis (Page et al., 1991; Lambert et al., 1991), as illustrated by the results shown in Fig. 5.11. Note, however, that the critical ratio of [Clÿ]/ [OHÿ]  3, at which the probability of initiating corrosion in the laboratory specimens represented by the data in Fig. 5.11 started to become significant, was considerably higher than the corresponding critical ratios of < 1, based  on studies involving aqueous alkaline environments intended to simulate concrete pore solutions (Hausmann, 1967; Yonezawa et al., 1988; Goni and Andrade, 1990). 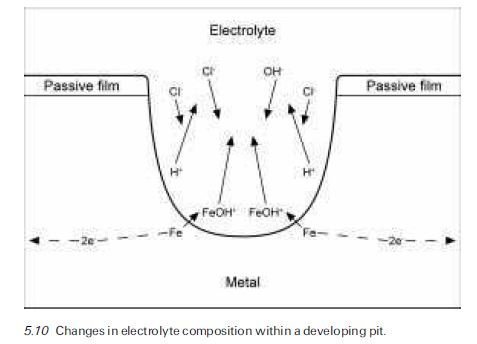 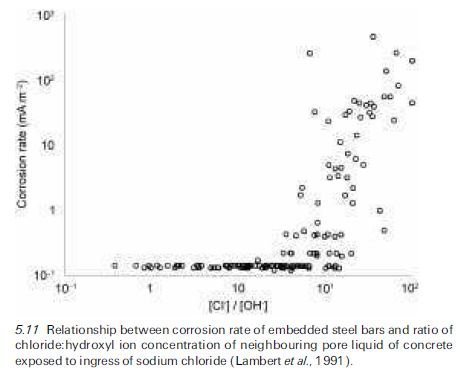 · For steel in concrete, the risk of pitting corrosion developing at a given chloride concentration in carefully produced laboratory specimens is often far lower than that observed for concrete in actual structures with the same level of chloride contamination. Thus the corrosion rates in Fig. 5.11, when plotted against the more readily measured total chloride content of the concrete (expressed by mass of cement), yielded a relationship suggesting that the risk of significant corrosion was negligible until a threshold chloride level of about 1.5% was exceeded (Lambert et al., 1991). As illustrated in Table 5.2, however, earlier surveys of UK reinforced concrete highway bridges (Vassie, 1984) had indicated that chloride levels well below this (in the range 0.2± 0.4% by weight of cement) could be associated with significant corrosion risk, and broadly similar conclusions had also been reached from surveys of UK buildings. It was suggested that the disparity in performance between real structures and laboratory specimens was due, at least partly, to differences in the integrity of the interfacial layer of cement hydration products formed in close proximity to the passive film on steel in concrete (Page and Treadaway, 1982; Lambert et al., 1991); this interfacial layer, which is believed both to buffer the electrolyte in the vicinity of incipient anodic sites (thus inhibiting the local acidification required for sustainable pit growth to occur) and also to limit the migration of chloride ions towards the local anodes, is obviously more prone to disruption by macroscopic voids, cracks, etc. in site concrete than in carefully prepared laboratory specimens. Recent evidence in support of this hypothesis has been provided by measurements of the influence of deliberately introduced interfacial voids on the chloride threshold in laboratory specimens (Glass et al., 2001) and by investigation of the effects of interfacial defects caused by bleeding in reinforced concrete columns (Soylev and FrancËois, 2003).

The effect of steel potential on the risk of pitting, which was referred to in Section 5.2.3, gives rise to various possible domains of behaviour for steel in concrete as illustrated schematically in Fig. 5.12, adapted from Pedeferri (1996). Under water-saturated conditions of natural exposure that are asso- ciated with restricted oxygen access, the potential of the metal is liable to be depressed to values that are often more negative than about ÿ500mV (SCE scale) and normally below Ep; if this occurs then the initiation of pitting will be suppressed although the oxygen-denuded concrete may subsequently become contaminated with chloride at relatively high concentrations, an electrochemical condition referred to as `imperfect passivity’, as explained in Section 5.2.3; if the steel potential becomes further depressed below Er, the even more stably protected state known as `perfect passivity’ may eventually be attained in which the repassivation of pre-existing pits is also induced. 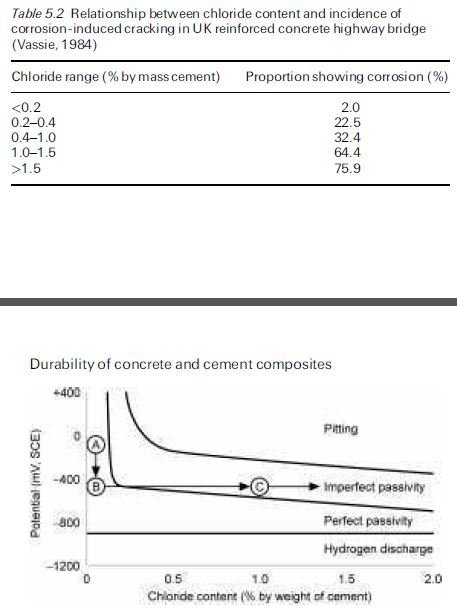 Sources of further information and advice

The question of gel pores