The expansive ettringite form of sulfate attack in concrete exposed to aggressive ground is probably the most familiar type that occurs in the field (Bensted, 1981a,b) and was at one time regarded as the only serious phenomenon involved. Indeed sulfate attack was given a formal definition by the American Society of Testing and Materials (ASTM) in the 1970s as follows: `Sulfate attack can be defined as a chemical or physical reaction, or both, between sulfates usually in soil or ground water and concrete or mortar, primarily with calcium aluminate hydrates in the cement paste matrix, often causing deterioration’ (Bensted, 1981a). Although thaumasite sulfate attack has come into increased prominence recently (see Section 4.3) and involves the silicate as well as the aluminate phases, this does not render the above definition inappropriate insofar as what is now regarded as the conventional form of sulfate attack is concerned.

Sulfate attack has attracted increasing interest over the years as its complexities have become more apparent. There have been a number of recent review articles (Skalny and Marchand, 2001; Santhanam et al., 2001; Bensted, 2002b; Neville, 2004) and even books on the subject (Marchand and Skalny, 1999; Skalny et al., 2002). Ettringite formation features prominently in many situations but there are several other processes, such as the conversion of portlandite to gypsum and reversible hydration/dehydration reactions of sulfate salts, such as the Na2SO4 (thenardite) $ Na2SO4.10H2O (mirabilite) system, that have also been implicated. In this context it may be noted that there has been disagreement over the terminology used to classify these various pheno- mena and some authors consider processes such as the thenardite/mirabilite transformation to be purely physical phenomena, as distinct from chemical forms of attack. It is generally agreed that sulfate attack needs the presence of moisture and it is believed to involve `through-solution’ mechanisms, with transport of sulfate ions through the surface of the concrete or mortar. Normally such transmission is of extraneous sulfate ions, but internal sulfates within the structure can also contribute if the amounts contained in the concrete mix materials are not controlled within acceptable limits (Skalny et al., 2002). An example of the sort of degradation that may be produced is illustrated in Fig. 4.1.

In its initial stages, sulfate attack may result in a general hardening of the cement matrix. This usually arises from the pores and voids present becoming filled, through the ingress of SO4 2ÿ ions, by crystals of gypsum and/or ettringite, which tend to increase the overall density of the concrete or mortar. These crystals, which are formed in the pores and voids, may cause expansion directly by anisotropic growth or indirectly by increasing the pore water pressure, giving rise to internal stresses that might ultimately, in specific instances, destroy the concrete or mortar. For instance, in transforming one mole of calcium hydroxide CH to gypsum CsH2, the volume of solids is more than doubled (from 33.2 cm3 to 74.3 cm3) and the transformation of calcium aluminate hydrate and gypsum to ettringite also involves more than doubling of the volume of solids (Bensted, 1981a; Lea, 1970; Eglinton, 1998). 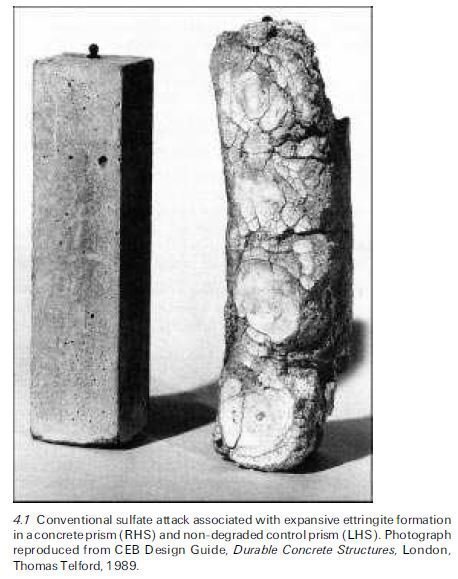 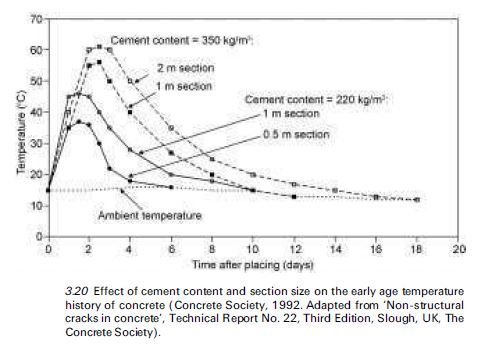 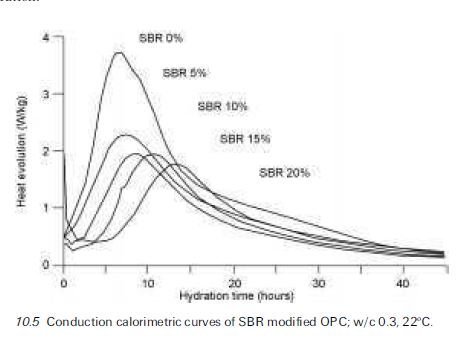