SEM examinations reveal that two distinct patterns of cement hydration may occur simultaneously in different cement grains near each other in the same concrete, leading to different consequences with respect to pore structure. It is well established that the larger cement grains tend to hydrate inward from their outer boundaries, forming relatively dense `inner products’ of hydration.8 These inner products were so designated because they are produced within the space marked by the original boundaries of the individual cement grains; the nomenclature was originally suggested by Taplin.28 The inner products are primarily C-S-H. They can be readily recognized in backscatter SEM examination, and appear initially as thin gray layers around cores of white residual cement grains. As hydration proceeds, these thin layers become thicker and progress inward, sometimes irregularly in response to the varying internal arrangements of the different cement components within a particular cement grain. The residual unhydrated cement cores simultaneously shrink. In some cement grains the cores may eventually disappear entirely, except that often small bright `shards’ of C4AF within them tend to resist hydration and may be preserved indefinitely. Within the same concrete, other residual cement cores may persist indefinitely, especially where local areas exist of high concentration of cement grains. An example of a backscatter SEM showing these features is provided as Fig. 2.3. Figure 2.3 was taken in a relatively porous local area within a w:c 0.30 Portland cement paste hydrated for more than three months under sealed conditions. Examples of an inner product hydration shell, a residual unhydrated cement core, and a fully hydrated cement grain are indicated by arrows. It should be understood that the `fully hydrated cement grain’ is known to be fully hydrated only on the plane of observation; it may have had a residual core above or below the plane. In Fig. 2.3 about a dozen examples can be seen of residual cores and their surrounding gray inner product hydration shells, and a number of apparently fully hydrated cement grains without cores can be seen. How do these features impact on considerations of pore structure? The original Portland cement grains are usually mostly non-porous clinker grains composed primarily of calcium silicates and aluminates. Hydration within the original cement grain boundaries ± i.e. local conversion of the cement components to hydrated C-S-H within the grains ± necessarily requires penetration of water into them. It also requires the development of internal space so as to accommodate the C-S-H product, which is much less dense than the cement components from which it is generated. Such space must have been produced by dissolution and removal of some portion of the cement substance within the zone that becomes the inner product shell. Cement components so dissolved and removed from within this hydrated zone are precipitated as hydration products elsewhere, mostly (but probably not entirely) in the adjacent water-filled space. These deposits constitute the so- called `outer products’ of hydration;8,28 they form a groundmass of smaller particles surrounding the larger cement grains and occupying the formerly water-filled space between them. These outer products can be seen in Fig. 2.3 as small particles of varying shades of gray. They contain mostly C-S-H, but also usually a significant content of calcium hydroxide, and some ettringite and monosulfate. In Fig. 2.3 it can be seen that the groundmass areas are far from being entirely filled with deposited solids; many individual black epoxy-filled pores a few um  in size can be distinguished. The generally dark tone of much of the groundmass area reflects the presence in it of innumerable unresolved sub-m-sized um sized  sub-m-sized pore spaces.

The extent to which the groundmass space is filled with outer product deposits depends very much on the w:c ratio, which controls how much space there is to fill, and on the progress of hydration. In low w:c concretes the expectation is that such deposits will eventually almost fill the space. The converse is true for high w:c concretes, in which the wider groundmass areas surrounding the large cement grains are expected to always retain significant pore space in large sizes. Figure 2.3 was taken at a relatively low magnification, so as to show an area large enough to illustrate the various features present. One detail that cannot be seen in Fig. 2.3 is that the perimeters of the inner product grains and some of the particles within the groundmass have spiny protuberances. These spines were the `Type I C-S-H’ particles recorded in secondary electron images of fracture surfaces in the early days of SEM investigations. They can be seen in backscatter SEM, but require higher than normal resolution to resolve them. Figure 2.4 was taken using a field emission backscatter SEM operated at low voltage29 and, as such, is a higher-than-normal resolution image. The specimen was a w:c 0.40 paste hydrated for 28 days. In Fig. 2.4, `A’ marks the unhydrated core, `B’ the inner hydration product, `C’ the groundmass incorporating the outer hydration products and residual unoccupied space, and `D’ a monosulfate deposit within the groundmass. It is seen here that at high resolution the inner product is not as uniform as it appears, for example, in Fig. 2.3. The `spiny’ morphology is not well resolved around the inner product boundary, but it is clearly evident within the groundmass. Significant pore space is retained in the groundmass; within the small area depicted, there is one ca. 5 um pore (con- taining a spiny C-S-H deposit within it), four or five less distinct pores of ca. 0.5  um sizes, and innumerable ill-resolved smaller spaces.

The resolution of Fig. 2.4 is sufficient to hint at the existence of finely divided internal porosity within the inner product, but not to resolve the pores.
The results of TEM examinations reported by Richardson30 indicate that such inner products typically contain extremely fine pores of diameters of the order of 10 nm. Such pores are far too small to resolve in backscatter SEM examination. Thus at least two pore families of different origin exist: pores varying in size downward from multi-um levels within the groundmass, and extremely fine (ca. 10 nm) pores within the inner product. The former is necessarily involved in water and ion movement through the paste; the latter almost certainly is not. A further set of complications now needs to be considered. In contrast to the `inner product’ hydration pattern illustrated and described above, an entirely different local hydration pattern takes place for many smaller cement grains. The dividing line seems to be typically around 15 um or so. With these smaller cement grains, a thin shell of hydration product is quickly deposited around the grains, but the shell does not get progressively thicker. Rather, the core within it proceeds to hollow out by progressive dissolution. The result is the production of partly or completely emptied out `hollow shell grains’, the so-called `Hadley grains’.31,32 These hollow shells enclose a class of pores in cement paste not known to Powers and Brownyard.26 The internal structure of these hollow grains can best be illustrated in high magnification secondary electron images of fracture surfaces, such as that of Fig. 2.5, which was taken many years ago by D.W. Hadley.31 The particular hollow cement grain shell, about 10um

in length, was adventitiously fractured in preparing the fracture surface specimen, thus permitting observation of the separation that has opened up between the shell and the core of unhydrated cement. The spiny feature of the outer C-S-H shell has been mentioned previously.
Figure 2.6, taken at relatively low magnification in backscatter SEM, illus- trates the common occurrence of such hollow shells in archetypical concretes. The specimen was a w:c 0.45 laboratory-mixed concrete hydrated for three days; the area imaged was relatively porous. White arrows point to some of the grains that are in the process of hollowing out, and to other, mostly finer grains, that are completely hollowed out. These empty spaces within hollow shells constitute a class of pores of substantial sizes, ranging upward to ca. 15 While the shells surrounding them may impede fluid and ion transport across these spaces, the shells must be presumed to be `leaky’ since they permit the transfer of dissolved cement components into the surrounding space during the hollowing out process. The two modes of hydration, i.e. `inner product’ and `hollow shell’, are not necessarily entirely mutually incompatible. Indeed, Scrivener33 considered that within large grains hydrating in the inner product mode, a solution-filled annulus of appreciable thickness separates the advancing layer of inner hydrated product from the retreating solid core. The present writer has not seen evidence for this concept in his own examinations. Hollow shell pores are not confined to cement pastes or archetypical con- cretes. As indicated by Kjellsen and Helsing Atlassi34 multi-um sized hollow shells are prominent in silica fume-bearing high performance concretes, often constituting the only pore space visible in an otherwise extremely dense microstructure. A further peculiarity with respect to hollow shell pores is that some of them may be considered as only temporary pores. Deposition of secondary C-S-H may take place within some of them even at relatively young ages. Furthermore, as available and accessible open spaces, they are inevitably subject to subsequent deposition of later hydration products. Secondary deposits of C-S- H may eventually fill some of them up and, as shown by Kjellsen and Helsing Atlassi,34 some hollow-shells may be eventually filled with CH deposits. Figure 2.6 was taken in a relatively porous local area to facilitate presentation of the morphological features of the pore spaces. Cement pastes in archetypical concretes often contain such porous open areas, but also may contain relatively dense areas as well. An example is shown as Fig. 2.7, taken in a 28-day-old w:c 0.45 laboratory-mixed concrete. The groundmass is still definitely porous and hollow shell grains can still be picked out, but the general infilling of hydration products has reduced the sizes of the pores and the pore content significantly. This process continues as long as hydration proceeds; concretes permitted to hydrate indefinitely by continued availability of water may show very dense groundmass structures with still further reduced porosity, at least in some areas. The key clause in the preceding sentence was `in some areas’. In many concretes, such dense areas of very limited porosity may border adjacent areas which display relatively large open pores and hollow shell grains. This irregular `patchy’ structure will be discussed in a subsequent section. 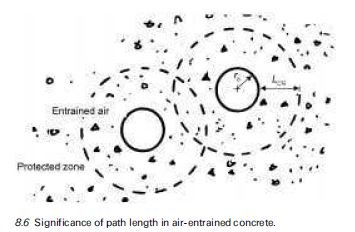